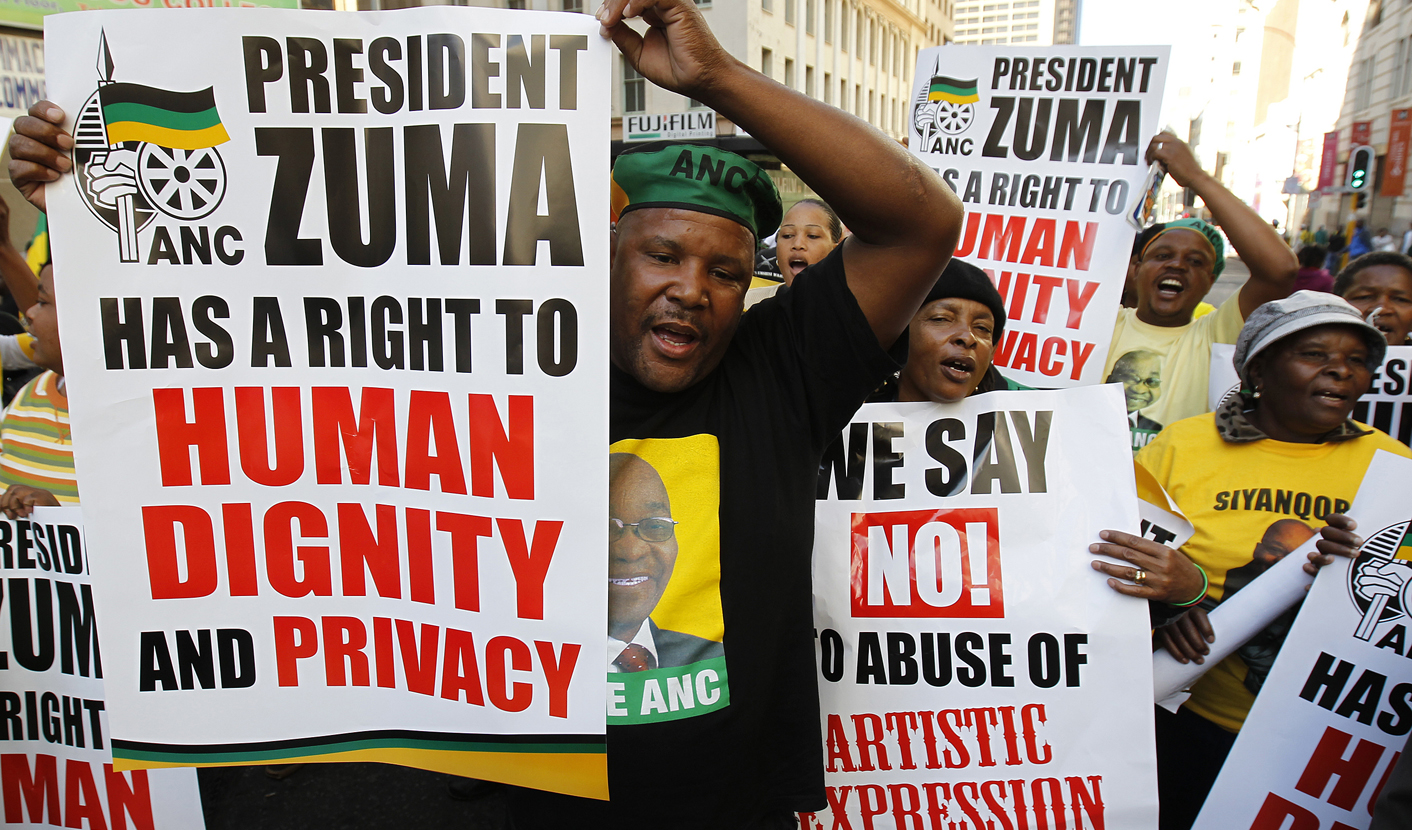 The planned ANC march to the Goodman Gallery is still going ahead, even though The Spear is no longer on display there, and City Press has removed the image from its website. The tone of the tripartite alliance on Monday suggests that the march will be more of a victory lap than a battle-call. By SIPHO HLONGWANE

On Thursday, outside the South Gauteng High Court, ANC secretary general Gwede Mantashe called upon all South Africans to boycott City Press for publishing a copy of The Spear, a portrait of President Jacob Zuma with exposed genitals, unless the paper removed the portrait and issued an apology. He also promised that the party would march upon the Goodman Gallery, where the picture was originally hung, on Tuesday.

The march is still planned to go ahead, despite City Press finally removing the image from its website. The paper’s editor-in-chief Ferial Haffajee explained her decision in a column, saying that it had been removed after the decision to publish the image snowballed into a moment of rage and pain.

“City Press is not and has never been an object of division; neither am I. I prefer to understand City Press as a bridge across divides, a forum for debate,” Haffajee wrote. “That we are now a symbol of a nation’s anger and rage is never the role of media in society. We are robust and independent, yes, but divisive and deaf, no.”

“We appreciate what has been done,” Mthembu said. “We appreciate that at least Ferial is saying she can now understand the pain. All that we are saying to her is, can she apologise for the pain. Please apologise to the people of South Africa. This pain has been so deep-seated.”

Mthembu denied that the ANC was divided over the painting in an interview with the Mail & Guardian, and dismissed those who had expressed sentiments that weren’t in keeping with the party line as being power-hungry.

The ANC Women’s League congratulated Haffajee for removing the offending image. The league’s statement said: “We understand that the editor has strong feelings on the freedom of expression, however, we respect her for listening to the cries of the country and removing it. She seems to understand the old wounds of (the) past that were ripped open by people seeing their president portrayed in the manner he was.”

Anecdotal evidence suggests that the call to boycott City Press was not a success.

ANC spokesman Ishmael Mnisi said on Monday night that the ANC was still in a meeting over the latest developments, and would issue comments only after that meeting was concluded.

On Monday, a delegation of the South African Communist Party met Haffajee and some staff members of City Press to sort out the differences between the two organisations.

According to the SACP, it stressed that while it respected freedom of speech and artistic expression, it did not view this as an “abstract right that licenses media workers and artists to trample on people’s dignity and inflame racial tensions”, and maintained that in a democracy it has the right to boycott newspapers that do not respect the right to human dignity.

“The City Press stressed that it did not believe that a boycott of newspapers was the way to deal with difference between political organisations and the media, more so when those calling for the boycott had access to decision-makers at the newspaper,” the SACP said. “The SACP and City Press agreed that the experiences around The Spear should ultimately serve to create a better understanding between the media, its consumers and political organisations in the interests of consolidating media freedom and our democracy.”

The police expect about 15,000 people to march from Zoo Lake to the Goodman Gallery in Rosebank. The section of Jan Smuts Avenue that links the park and the road where the gallery is will be closed from 9AM till 3PM. The march is expected to begin at 10AM. DM

Photo: Supporters of the ANC demonstrate outside the court in Johannesburg, May 24 2012. REUTERS/Siphiwe Sibeko.