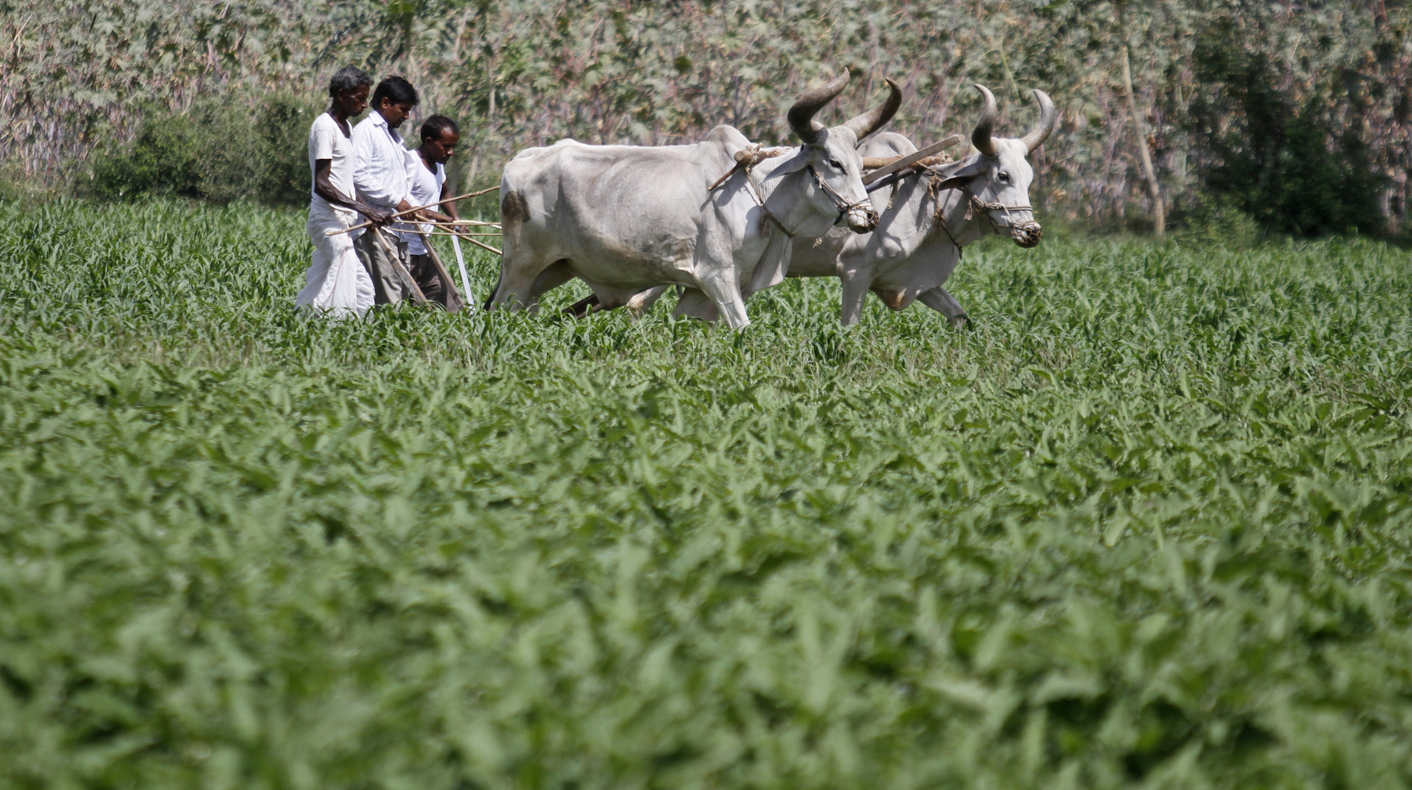 In India's northern desert states, farmers are scrambling to harvest as much as they can of a bean with the power to lift them out of poverty. In the United States, the multi-billion dollar shale energy industry is banking on their success. By Meenakshi Sharma and Selam Gebrekidan

U.S. companies drilling for oil and gas in shale formations have developed a voracious appetite for the powder-like gum made from the seeds of guar, or cluster bean, and the boom in their business has created a bonanza for thousands of small-scale farmers in India who produce 80 percent of the world’s beans.

“Guar has changed my life,” said Shivlal, a guar farmer who made 300,000 rupees ($5,400) – five times more than his average seasonal income – from selling the beans he planted on five acres (two hectares) of sandy soil in Rajasthan state.

“Now, I have a concrete house and a colour TV. Next season I will even try to grow guar on the roof.”

Guar gum, which is also used to make sauces and ice cream, is a main ingredient of the hydraulic fracturing, or fracking, process used to extract oil and gas from oil shale.

Fracking has been called the technology that will change the geopolitics of energy, boosting domestic North American gas supplies to such an extent that experts predict the net importing region will soon turn into a significant gas exporter.

It has also turned guar into a precious commodity farmers now call “black gold”. In the Rajasthani city of Jodhpur, under the shadow of an ancient fort, traders buy guar seed at 305 rupees ($5.5) a kg, a 10-fold increase from a year ago.

“The whole world got caught not ever thinking they would need as much guar as they do now,” said Wade Cowan, co-owner of West Texas Guar Inc., a Brownfield, Texas, company that supplies the powder to U.S. energy companies.

India, on average, produces more than 1 million tonnes of guar beans annually, the biggest crop in the world. It exported more than 400,000 tonnes of guar products, including gum, in the fiscal year that ended in March 2011. Exporting beans is prohibited.

“There is a shortage of seeds. Last year, good quality seeds were available at around 60 rupees a kilo but now, traders are demanding over 500 rupees per kilo for the same seed,” said Shyam Lal, a farmer based in the Churu district of Rajasthan.

Guar gum is used to increase the viscosity of proppants, materials which are forced into shale fractures to enlarge them so that the oil and gas can be extracted. It also helps reduce friction, which in turn decreases the energy consumed.

About nine tonnes of guar gum are used per well. Some companies are also fracking wells several times to squeeze out as much as possible, which means using even more guar.

As a result, guar prices in India has risen rapidly, so fast that the local commodity exchanges halted trading in guar futures in late March amid a ministerial inquiry.

David Lesar, CEO at market leader Halliburton, recently said the cost of the guar gel now accounted for up to 30 percent of fracking costs to customers in some basins.

“The problem with guar is it is probably the fastest-moving commodity price that I have ever seen,” Lesar said.

To cash in on the guar rush, Vikas WSP, India’s largest producer of guar gum, is distributing, free of charge, seeds worth more than 900 million rupees to 100,000 farmers and giving them guaranteed returns, said B.D. Agarwal, its chairman and managing director.

“This upcoming season supplies will definitely be higher than 2011,” said Uday Merchant, managing director of Lucid Colloids, a guar exporter based in Mumbai.

The United States produces guar, but only on 40,000 acres (16,187 hectares), an area that pales in comparison with the more than 10 million acres (4 million hectares) Indian farmers are expected to plant this year in the Thar desert.

In 2011, about 20,000 acres were planted with guar in Texas but only 5,000 acres were cultivated as the crop was hit by drought, said guar supplier Cowan. He estimates the planted acreage might be twice as much this year.

With the North American shale boom expanding to China, South America and Eastern Europe, oil field services firms around the world are poised to gobble up guar. U.S. industry researchers reckon the global fracking business will grow to $37 billion in 2012, up $6 billion from a year earlier.

But the rising prices and tight supplies are spurring a search for alternatives.

Halliburton touts its “CleanStim” technology as a possibility while Schlumberger points to “HiWay,” which it says will cut back on the water and sand use in fracking.

Both firms did not provide specific details about their products, which they said can replace proppants.

CleanStim technology has been used effectively in a number of basins, including the Eagle Ford prospect, and will essentially create a ceiling on guar prices, Probert said.

Other industries that use guar, such as paper, food processing and textiles, have already turned to alternatives.

For fracking, replacing guar will only make sense if prices continue to rocket. But guar producers expect prices to ease by 2013 as the new crop comes to market and supplies increase from all the extra acreage planted.

Guar merchants say prices, like those of many agricultural commodities in India, will hinge on the monsoon rains. The rains are expected to arrive on time at the beginning of June and progress as normal.

But even if guar eases from its current levels, prices would still be highly profitable for farmers who cultivate the crop at very little cost.

And the robust demand from the U.S. shale oil and gas industry shows no sign of abating.

“We’re out desperately trying to find more of this product to process for the market, because we could sell all we can find,” Jim O’Brien, chief executive officer of U.S. chemical maker Ashland Inc, said. DM

Photo: Farmers work in their guar field at Shinoli village in the western Indian state of Gujarat April 3, 2012. In India’s northern desert states, farmers are scrambling to harvest as much as they can of a bean with the power to lift them out of poverty. In the United States, the multi-billion dollar shale energy industry is banking on their success. REUTERS/Amit Dave