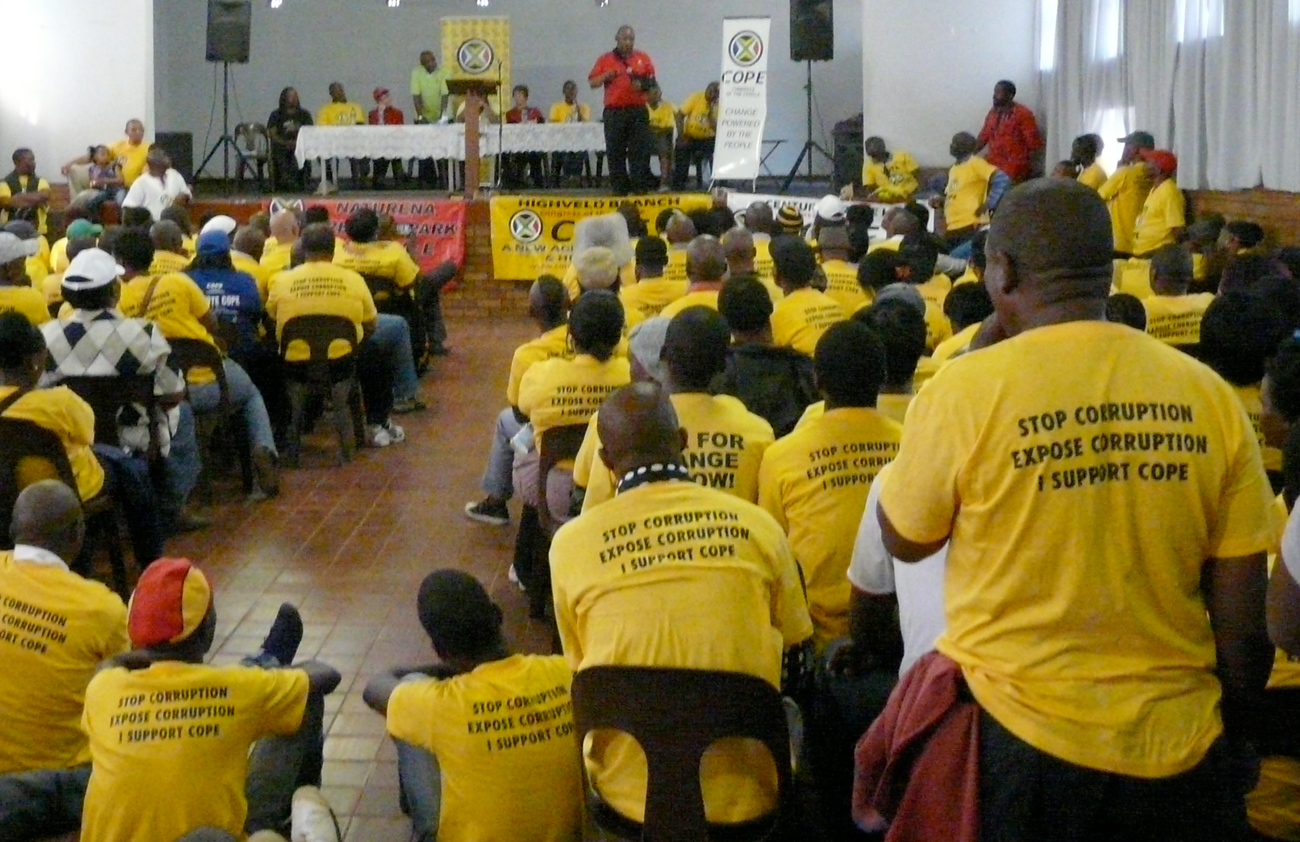 Cope president Mosiuoa Lekota hasn’t had much of a public face of late. Still, if his grand plan to oppose the ANC government’s Protection of State Information Bill and the e-tolling system works, we’ll be hearing from him and his party a lot more. No guarantee that the voice will be loud, though. By SIPHO HLONGWANE.

The St Martin’s Catholic Church hall in Orlando West, Soweto, is not a particularly comfortable place in which to spend a few hours. It is small, and the air-conditioning could be better.

Its diminutive size made the two busloads of Congress of the People  supporters look like a sizeable crowd. The effect suited the message the Cope president, Mosiuoa “Terror” Lekota, came to deliver on Sunday afternoon.

The party that failed to dent the ANC’s grip on power is now going to take to the streets to mobilise the people against the Protection of State Information Bill as well as the Gauteng Freeway Improvement Project, popularly known as the e-tolling system.

Cope faces two major challenges in this new task that it has taken on. Firstly, there seems to be a basic ignorance in the townships about how the information bill will affect their lives. Secondly, mobilising the masses takes activists and loyalists doing grunt work to succeed. Where is Cope  going to find them?

When Lekota spoke about the bill, he did a fairly decent job of describing the knock-on effect corruption has on people. Speaking in isiZulu and isiXhosa, he crudely described the general fiscus as a large pot in which all our money goes. Then the government dips into that pot and builds houses, provides electricity, lays pipes for water and generally improves the lives of the poor. He said his former colleagues in the ANC were in the habit of dipping their hands into the pot to “feed” themselves and their friends only.

Lekota said the only point of the bill was to block whistle-blowers from exposing government’s corruption. “Never once has this president or any of his Cabinet ministers explained to us that there is a subversive organisation that wants to overthrow the government. Never once have they shown us evidence,” he said.

“So who are these people that the government wants to silence? It is those who expose corruption? They don’t want people to know. These people are taking the old tricks of apartheid and want to use them against our people. Those who are bringing back those laws are black like us. They want to spend the public money for themselves and not use it to develop the lives of our people,” he said.

According to Lekota, the disaster that is the Eastern Cape education department is a direct result of corruption. “I don’t care what Helen Zille said. I want to know what happened to the money for the schoolchildren in the Eastern Cape.”

On the rather more complicated issue of e-tolling, Lekota painted an even simpler picture: we can’t pay for the improvement and maintenance of our highways because that money is ending up in the pockets of greedy politicians.

“Our tax money is being held aside for themselves (the politicians in power). Then they bring in Austrians to build e-tolls. When we pay for e-tolls, all that money is going to Austria,” Lekota said.

Lekota then brought the e-tolling issue into the township by likening the e-toll gantries to gigantic vacuum cleaners that will suck the money out of your very pocket every time you drive under it, to the point that when the family sets off from Soweto to Pretoria to negotiate ilobolo, they will arrive at their destination to find that some of the money has disappeared.

“How are you free in your own land if you cannot go to Pretoria to visit your friends without paying,” he asked.

“Speak to even those who vote for people who do corruption and tell that we should open each other’s eyes,” the Cope president said.

The applause in the hall said that Lekota was preaching to the already converted.

For this new plan of Cope’s to succeed, they need to take it out on to the road. They need feet on the ground. But the party is still in disarray after a lengthy tussle for control between Lekota and Mbhazima Shilowa. It only has about 7% of the seats in Parliament, a number that will probably go down after the next election.

In places like Soweto, there is a slightly greater concentration of Cope voters than in other places, but nothing that the ANC would really chew its nails over.

The party simply does not have the required number of activists to take Cope’s message into the communities, to cause change that eventually results in the ANC losing seats in Parliament. Even when the message is true, as always with Cope it’s a case of far too little, far too late. DM