Chris Anderson: Father of TED, purveyor of ideas worth spreading 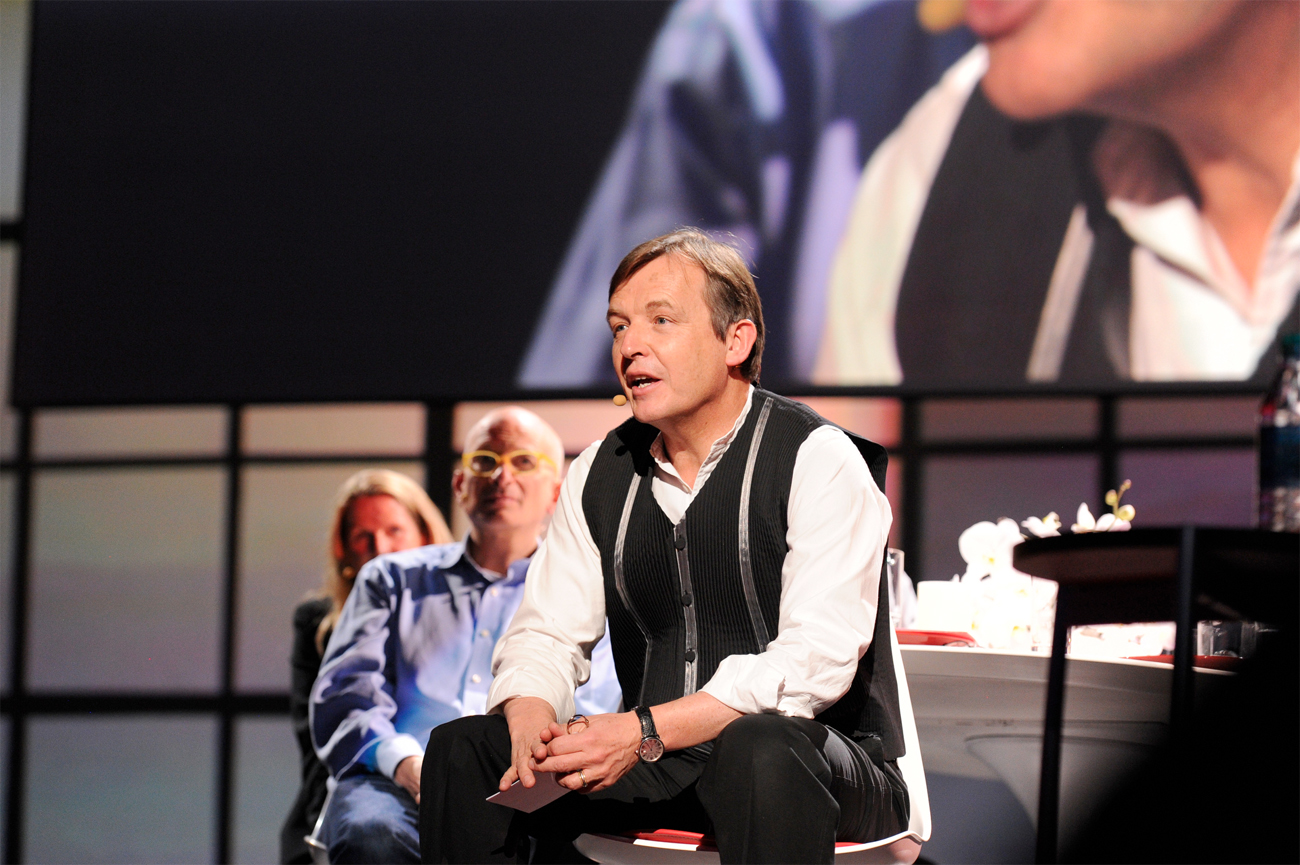 The first time I met Chris Anderson (curator of the renowned Technology, Entertainment and Design conferences, not to be mistaken for the Chris Anderson of Wired magazine), I was at the TED office in New York getting some original conference footage for a film I was making.

We had a moment in the lobby, where I was waiting for the file transfer and he was waiting for the lift. He strolled over to the large window overlooking the Hudson, where there were three large, thick, metal coiled springs held upright on stands along the wide sill.

“Watch this,” he said and pushed down one of the coils, which on release sprung up with force, bouncing vigorously. Within seconds the coil next to it, and then the coil next to that one, started bouncing, untouched. “Sympathetic resonance,” he smiled, and walked through the open doors of the lift.

On reflection, I wondered if the TED conferences – a series of 18-minute presentations by the world’s most impressive thinkers and doers, accessible online at no charge – are an attempt at worldwide sympathetic resonance.

“There’s definitely some kind of resonance happening, yes. That’s language we use,” Anderson starts to explain to me over breakfast at the Johannesburg’s Melrose Arch Hotel. He speaks in a measured tone, cogent and yet quiet, confident.

Considering that he has been at the intersect of some of the finest minds in the world on one stage for 15 years, there is no way he could escape the influence on his already expanded worldview. He is an inspired realist.

“There are a number of theories about it. We came to understand that there are people who want to know more about the world, who aren’t fully satisfied with their existing media diet – that the stories of conflict, drama and gossip we get fed every day aren’t the whole story.

“There’s another narrative that’s exciting for them: pull the camera back and look at the big picture, or zoom the camera in and look at what might normally be considered invisible, to dig deeper and make sense of things. I think that’s what happens at TED: a speaker has a particular insight or view about the world, or a remarkable piece of work. When they share it others feel their passion and increase their own knowledge.”

And the impact of TED has been astounding, and unexpected. In a world where studies show that it takes between 1 second to catch the eye, and 6 more seconds to secure – or lose – one’s attention, 18 minutes of a single, frontal narrative seem like an age. But it’s worked.

How would this translate, I ask, if he were still at the helm of his former successful magazine business, Future Publishing. Understanding the seeming contradiction between the now 7-second attention span with the apparent attraction of the 18-minute oration, I’m interested to learn how he would re-tool his system were he back in the traditional publishing space.

“It would need to be structured as a hybrid of digital, audio-visual and live events. Print, alone, would not suffice. It wouldn’t be able to survive moving forward. Not anymore.”

Anderson clarifies further on why the TED model has flourished: “The metaphor is the ancient campfire, where there was that resonance between different brains taking place. People in a very theatrical situation locked on a speaker, hearing them tell a story and feeling the same emotion. So you have the sense of a super-organism at work. We’ve learnt a lot now through neuroscience that there are actual mechanisms that do that, that kind of sync us up. That is when the most powerful communication takes place – when listener and speaker are not just contemplating the same dry facts, but are sharing the same set of emotions.”

Besides free access to talks on the net, TED took this ethos and decided to broaden its global reach of Ideas Worth Spreading, through what Anderson calls radical openness. One of the most impactful initiatives to come out of Mothership TED is the satellite gatherings that have sprouted around the globe, called TEDx. These gatherings range from parlour-room meetings of a few dedicated TEDsters who want to share some local knowledge, to large-scale, several hundred-seat events at city halls or universities.

“Radical openness, which we use to power a lot of what we do, basically means that we throw the keys to someone else. We first got hooked by it when we started giving the talks away and saw the response from that. We then opened up our translations to people, and ended up getting 7,000 volunteer translators, which saw TED come out in 85 languages, to our amazement.

“And then we gave away our brand in the form of TEDx. We were astonished to see more than 4,000 events held, until today where, somewhere in the world, every day, there are about five or six TEDx gatherings taking place. So that’s become our mantra – we have an impassioned global community of people eager to be part of TED in some way. If we can open up to them, we’re likely to get better.”

The Qatari capital Doha recently hosted the TEDxSummit, which saw 700 TEDxers from around the world gather in one city for five days of shared inspiration and face-to-face exchanges. Expect an acceleration in the field of sympathetic resonance – the effects could be world-changing.

Although not part of TED’s agenda (they are apolitical and don’t offer the stage for religious discussion), I saw a photo of two beaming faces holding up their name tags to the camera: TEDxJerusalem and TEDxGaza, with a comment beneath: “Could this be the way forward for the region?”

The TEDx community in South Africa is very much part of the mix. Unofficially led by the local queen of TEDx, Kelo Kubu is convener of TEDxSoweto and has expressed the same intrinsic TED openness by working closely with, assisting and encouraging other TEDx conveners across the country. It’s also interesting that the woman who spearheads TEDx globally, is ex-South African Lara Stein, based at the TED HQ in New York.

I recalled to Anderson a conversation I had with a colleague and friend, an Aspen Fellow, with whom I had played a sort of devil’s advocate on an issue around TED. He insisted on getting a take on the empirical data on what TED had actually brought to the world. Being the right-brainer that I am, I responded by saying: “Isn’t it totally obvious? Enriching, inspired, free education on almost any topic under the sun, available wherever there is internet.”

But being a left-brain analyst, he wanted to grasp on to a pragmatic map of the full experience, a spreadsheet on how the world has changed. That conversation exhausted itself after several cycles around the same loop. I asked Anderson what he thought.

“There is no empirical data. That’s not really the point. We’re driven by a few core principles: the inherent curiosity of people, and how imagination opens up the realm of possibility. I can reflect on a few examples where some people changed their life paths, like in the case when Al Gore gave his talk and six people in the audience were so impacted, they left their jobs to focus their efforts more diligently on addressing climate change.

“There it was clear, and it stood out. I admit it would be interesting to look back and discover what might have happened through the full TED experience, but that would mean a deep and thorough retroactive search. I’m not sure that’s necessary.”

Anderson confesses that traditionally TED has been too American, and he’s long wanted it to have a stronger global flavour. It’s why he and his team have come to South Africa as part of a global auditions tour, to experiment and see who is out there. Taking in Johannesburg, Nairobi and Tunis to cover the African continent, they’ll continue on a worldwide loop, sourcing speakers for TEDGlobal 2013.

On Africa in general, Chris is optimistic. “Ten years ago the only real narrative about Africa, in the West, was that familiarly depressing one: problems, war, starvation, HIV, and all that goes with it. What’s been thrilling about the last 10 years is seeing that narrative dramatically change, certainly among the kind of people that come to TED. We’re seeing it replaced by innovation, opportunity, exuberance and the certainty that there is a growing contribution to the world’s future.”

Considering that TED may be the real news we need to hear about the world, that’s a refreshing angle on our continent. In fact, it’s an idea worth spreading. DM