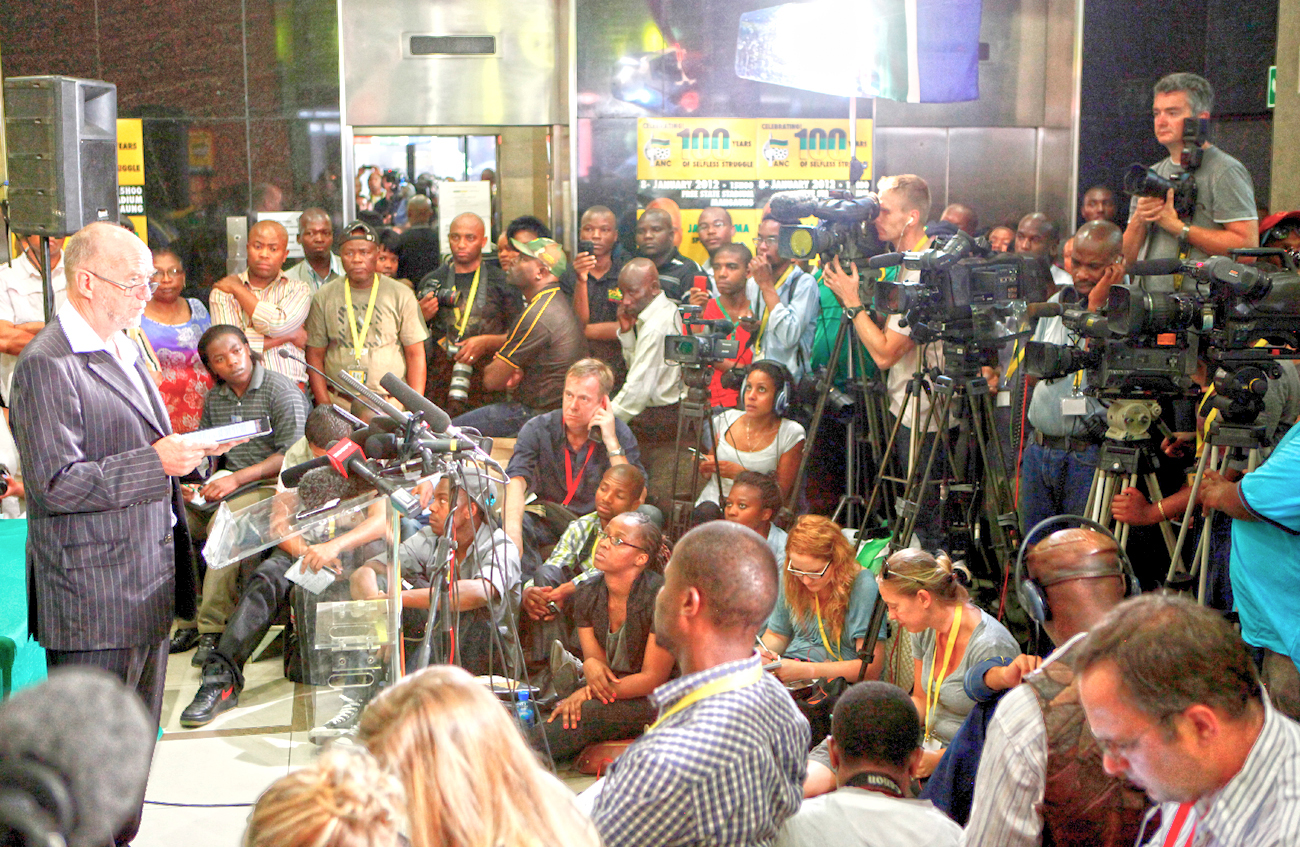 The ANC likes to boast that it’s a broad church, which means encompassing diverse views. When it comes to crunch time and you’re an ANC parliamentarian, however, your party needs to rule supreme over your conscience. That’s just how it is, as Professor Ben Turok and Gloria Borman discovered after refusing to vote for the ANC’s Protection of State Information Bill. Or is it? By SIPHO HLONGWANE.

One does not normally associate the name of Ben Turok with being on the wrong side of the ANC’s national disciplinary committee. Born in Latvia, he was an activist for the ANC in the 1950s and instrumental in drafting the Freedom Charter. He was incarcerated under the Explosives Act in 1963. After a brief spell as a British Labour member, he returned to South Africa in 1994, where he has served as a Member of Parliament for the ANC.

Yet Turok is currently facing disciplinary action for not voting for the Protection of State Information Bill last year when it was before the National Assembly.

After he walked out of the National Assembly, Turok accepted an invitation for an interview from SAfm, where he defended his decision. He said his objection was that the bill had ethical shortcomings. As an MP who had sworn an oath to the Constitution, and also as co-chairman of Parliament’s ethics watchdog, the Joint Committee on Members’ Interests, he was entitled to examine ethics across the board. The bill had changed so fast that it was almost impossible for any member to keep track of all the changes.

“I would be very surprised if any member of caucus – and I consider myself one of the more diligent – has kept up with changes in the bill. I think the ANC must sit down and discuss it very carefully, line by line – because it is political legislation, it does affect the democracy we want and the Constitution,” he said.

Turok and fellow ANC MP Gloria Borman faced the wrath of their caucus last year when they failed to vote for the secrecy bill, even though a party line had been declared by chief whip Mathole Motshekga. By disobeying the whip, both MPs opened themselves to party discipline.

However, this state of affairs shouldn’t surprise anybody: we live in a constitutional democracy that operates on a party-line system. Parliamentarians are not elected by specific constituents, but rather represent their parties and have to adhere to party lines when the chief whip says so.

Karima Brown, a leading political analyst and editor of the Southern Africa Report said that the party political system of South Africa presented two challenges for the ANC. “Party discipline is enforced in Parliament with a view to ensure that the party consensus actually passes. But it means that party members cannot vote on their consciences when the whip is in play,” Brown said.

“But also the ANC is a broad church, which means that very many views come into play. You’ll remember that the Protection of Information Bill was first tabled in Parliament, then withdrawn again. That was because many members were extremely concerned about it, and wanted it to be debated further. The bill was bumped to a committee for debate,” she said.

Where this leaves MPs of any party is that they have to choose between their consciences and the party line – and if they decide that they cannot sustain the line, then they have to resign. At least, that is what they should do if they wish to avoid facing the party’s disciplinary process.

“If Ben Turok was unhappy with the bill, he should have taken that final step of resigning,” Brown said. “He was not elected by a constituency and therefore had to toe the party line. This doesn’t just go for the ANC.

It’s any party [in our Parliament]. You’ll remember that the Democratic Alliance allowed its members to vote on their consciences when it came to the legalisation of the marriage bill. That decision came under a lot of fire because it was seen as a cop-out to the conservatives in the party, where the principled thing to do would have been to enforce a whip.”

This isn’t the first time the ANC has faced an MP revolt over a bill. In 1996, when the Termination of Pregnancy Bill was before Parliament, 11 members decided not to vote for the bill, despite the fact that a two-line whip (those who abstained needed the permission of the chief whip to do so) was in operation. Catholic priest Smangaliso Mkhatshwa took the option of abstaining. Sister Bernard Ncube, a Catholic nun, voted against the bill outright. Famously, Jennifer Ferguson refused to vote for the bill, even though she wasn’t Catholic.

Geoff Doidge, the ANC chief whip at the time, articulated the South African MP’s conundrum perfectly in his condemnation of Ferguson. “I’ve been taught that abortion is wrong,” he said. “But I am in Parliament as an ANC MP. People voted in 1994 for the ANC, not for Geoff Doidge. I’m not there as a Catholic MP, but as an ANC MP. In terms of that I must follow party discipline.”

Salvation may be at hand for Turok and Borman. The Sowetan reports that the very MPs who turned so viciously on the two last year are now urging the ANC to seek a political solution to the disciplinary hearing. The veracity of this report is emboldened by a public announcement published by the disciplinary committee’s chairman, Derek Hanekom, saying that the hearing (set for the week beginning 30 April) had been postponed so that Turok and Borman could consult with the ANC’s chief presenter.

The party is facing a very difficult conundrum with Turok. On the one hand, if it allows MPs to defy the whip system whenever their consciences get the better of them, it could easily lead to a solution where party discipline falls apart completely. It would be a free-for-all for ANC MPs. They’d do what they want in Parliament, and party consensus would mean absolutely nothing. It’s impossible to run a party under those circumstances. There’s a very distinct chance that some members may abuse such a freedom to push for policies in Parliament that are outside the ANC’s consideration. Like the nationalisation of mines, for example.

How silly would that make the party look?

On the other hand, disciplining Turok is a minefield for the ANC. This isn’t just another upstart ANC Youth League member, shooting his mouth off. Turok is an ANC struggle hero, a stalwart in the truest sense of the word, the man who risked his life and that of his family for his ideals. If anyone could claim to be the conscience of the ANC alongside other ANC men and women who gave everything, it’s Turok. This is on par with America “disciplining”’ a Founding Father. No wonder some ANC people are having a change of heart.

Party discipline is one thing, party image another. It looks certain that the ANC will have difficulties saving both. DM Photo: In many ways, ANC vs Malema was a much easier case than ANC vs Turok, Borman. REUTERS.