A question for our times: Are you smart enough to work...

A question for our times: Are you smart enough to work at Google? 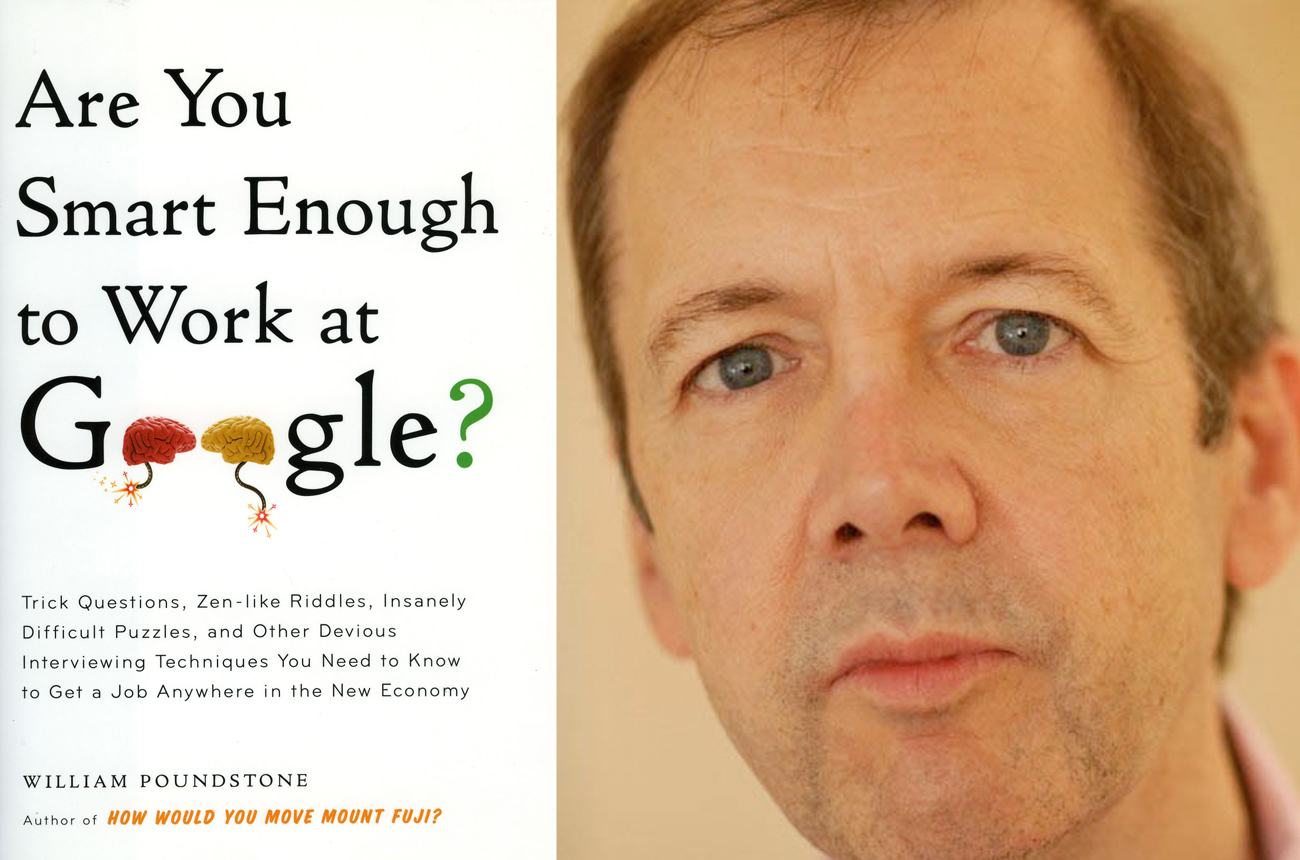 Microsoft invented the art of the long, tough interview process for humans who aspired to be computing deities. Google has perfected it. MANDY DE WAAL speaks to William Poundstone, who’s just written the book on what it takes to perfect an interview with the search-engine leviathan.

You’re sitting in the interview. In front of you, the interviewer, who you know is flint-hearted. People who give the interviews at Google are known to be subjectively aloof – in other words, not give a damn about whether you’re getting the job or not.

You’ve got a master’s degree, and you’re wondering why the hell they’ve asked you that question about your grades in high school, when the real kicker comes. “The next question is a bit of a left field question,” the interviewer says.

“Imagine that you have been shrunk to the size of a coin, and then thrown in a blender. Your mass has been reduced, but your density’s the same as usual. The blades at the bottom of the blender are going to start moving in 60 seconds. What are you going to do?”

Google’s one of the most desired company to work at in the world, and just about everyone who’s heard the word ‘Googleplex’ wants in, despite all those “big brother” articles in the media and the trouble brewing in Europe.

It’s a three-year-old recession and Fortune rated Google the top place to work at in global survey. But perhaps it’s the stories about the onsite haircuts, being able to take your dog to work, bowling alleys and talk of employees never being more than a few metres away from well-stocked pantries that really appeal. Besides, Google’s financial standing is excellent, and the global growth of the search (and everything else) giant still appears healthy.

More than a million people apply to work at Google each year. But only about 6,000 or so get in, a 0,6% success rate. If you’re lucky enough to get a look in, how do you make it through what is possibly one of the toughest interviews you’ll take?

“From the very beginning, Google got the idea that they want to have these intensive interviews to ensure that everyone is successful at their jobs and that they are able to do what they’ve been hired to do,” says William Poundstone, author of Are You Smart Enough to Work at Google?: Trick Questions, Zen-like Riddles, Insanely Difficult Puzzles, and Other Devious Interviewing Techniques You Need to Know to Get a Job Anywhere in the New Economy.

Poundstone says Google has become so smart at hiring people that if you look at their records, the retention rate is pretty impressive. “People really do stay at Google a long time and appear to be very reluctant to leave,” he says.

The author of another book called How Would You Move Mount Fuji? Microsoft’s Cult of the Puzzle – How the World’s Smartest Companies Select the Most Creative Thinkers, Poundstone’s always been interested in logic puzzles and riddles.

Because he became so good at enigmas, his friends going out on job interviews would mail him the riddles they’d been given. “They wanted to ask me if the answer they had given was the correct one,” says Poundstone, speaking to Daily Maverick from Los Angeles. “After I’d had a few of these emails I figured it was interesting, and that there could be a book in this.”

Poundstone’s first book on these left-of-centre questions was about the distribution of logic puzzles in interviews at Microsoft, and since that book came out he’s had emails from an even more people who’ve been in the job market and encountered questions not in his book. “I realised there were new questions being asked, so I kept a file of them and a couple of years ago I thought it would be a good time to do another book on that theme, particularly with the economy being the way it is,” he says.

The logic puzzles and riddles in both Poundstone’s books used to only be asked by companies who had a reputation for hiring very intelligent people, like software outfits, Wall Street companies and consulting firms. “But the funny thing is that you are now seeing these rather puzzling questions being asked in all sorts of mainstream companies like insurance companies, telephone companies, even Starbucks. I think they’re all getting so many applicants for every open position that they are kind of desperate to find some way of sorting the wheat from the chaff.”

But when it comes to the art of the brain-twister, Google is the master. “Google has pretty much made a study of all the different styles of interviewing and which works best. They are great believers in getting as much data as they can about the person. However, it was Microsoft that started the trend of a whole series of long, hard interviews where you will be solving problems, you’ll be writing code and doing whatever it is you will be hired to do. It became very influential in the technology field, and Google is the one that has taken it to the high point it is at today,” says Poundstone.

“Google has its own metrics and follows people throughout their careers, and found that with this interviewing strategy it’s been pretty good at avoiding false positives,” Poundstone says, adding: “That’s Google terminology for someone who’s hired and turns out to be a poor employee. It wants to avoid that because in this economy people tend to stick with the same job and if you have someone who’s not good at their job, it impacts (on) everyone around them.”

Poundstone’s advice for people itching to get into one of the many Googleplexes that exist across the world, is to get hold of the riddles that are asked and to try to do as many of these on your own. “See how many different approaches you can come up with it,” he says.

“The real challenge is to try to supply a running narration of what is going on in your head. These interviews are really supposed to be like psychotherapy and you’re supposed to be saying continually what you are thinking about so that (interviewers) can follow your thought processes. The problem is that you might be stumped, and there might not be a whole lot going on in your head, and you may have to have something to say in the meantime,” he adds.

Here Poundstone suggests a good exit strategy is to restate the question in your own words to show you understand it, or to ask more questions. “At Google they feel very strongly that you are allowed to ask for clarification or for some details. So if you have a question like the blender one, you can ask for more details like: ‘Is there going to be a lid on the blender, or will liquid be added?’ to which they are likely to answer: ‘No’. When you do that you can get further hints that might help you.”

But what is the right answer to that blender question? “With a lot of these questions there is no single right answer,” says Poundstone, who adds Google essentially wants to see how you think. “The answer that is considered good in terms of the blender question is to make use of an idea called change of scale.”

Every wondered how an ant can carry 50 times its own weight even though it is so small? If you are shrunk and your density remains the same, it means that like an ant, the ratio between your body size and your muscle mass will be very high, so you’ll be very strong. Much like that ant.

“What this means is that if you were a small creature you’d be very good at lifting your weight against gravity. The answer they consider very clever is to cite this and to say that if you are that small, you’d probably just be able to jump right out of the blender like a grasshopper.”

So. Are YOU smart enough to work for Google? And, by the way (without Wikipedia), what is a googolplex? DM

Photo: William Poundstone and his book – Are you smart enough to work at Google?