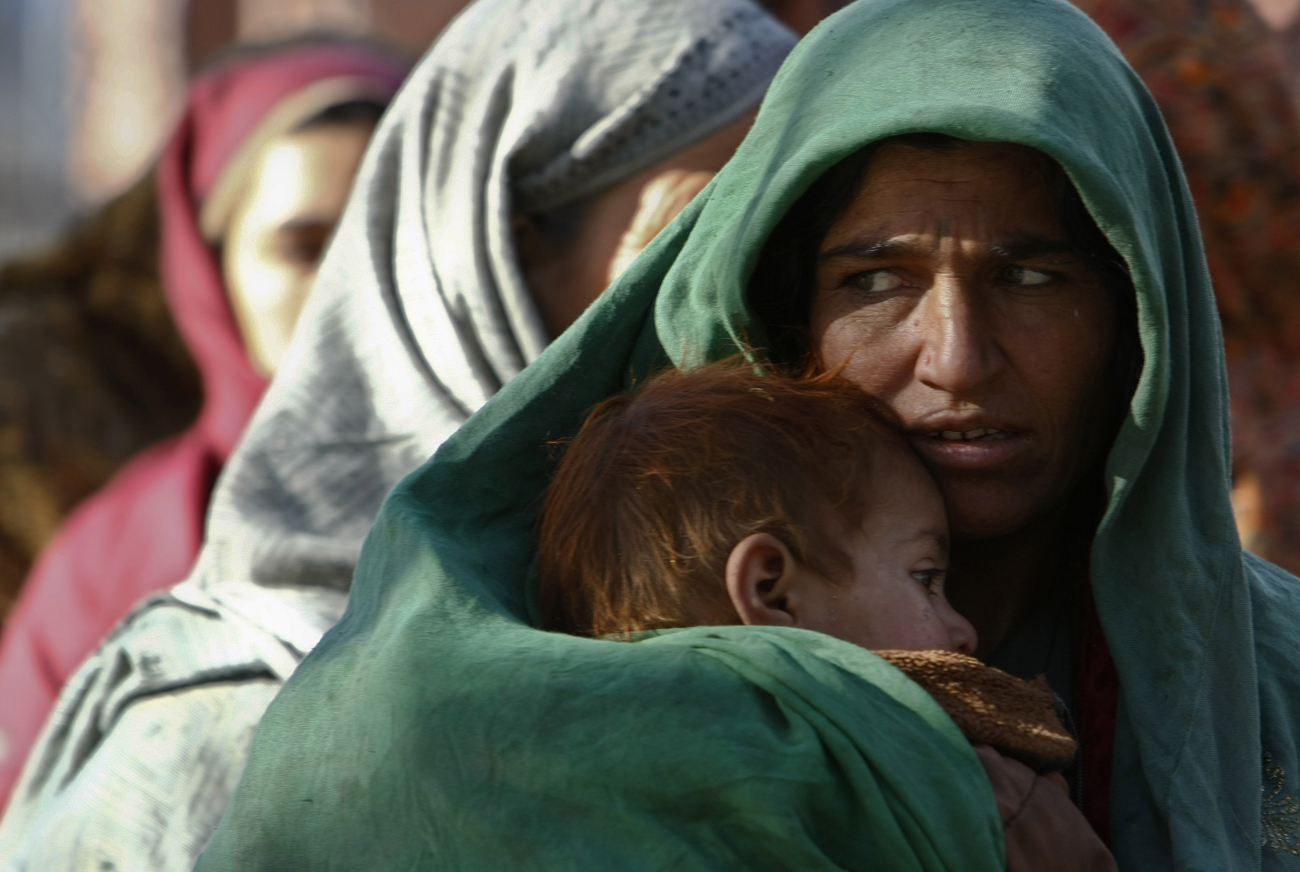 An old Pashtun proverb sums up the motivation for war in three words, “Zan, zamin, zar” – women, land and wealth. The progress of Afghan women has been promoted as a positive outcome of the international occupation of Afghanistan. Women and women’s rights were seen as just cause for war. And even while some progress has been made to uplift the station of women in Afghan society, much remains the same. By KHADIJA PATEL.

October 2011 marked 10 years since British and American forces intervened in Afghanistan. Theirs was a mission to mitigate the threat to global security following the attacks on the United States on 11 September 2001. In November of that year, the US state department released an 11-page report on the Taliban’s “war against women”, enumerating the systematic repression of women in Afghanistan: girls could not go to school or university; women were very rarely allowed to work; they were denied access to healthcare; they had to wear a burqa outside the home, but could not leave their homes without a male relative.

Avenging the 9/11 was reframed as a war for human rights in Afghanistan – in particular the rights of women. It was a remarkably powerful narrative. The Taliban’s brutal treatment of women was used to justify military invasion. And there was sufficient truth in the reality of the position of Afghan women to make it plausible.

Yet as international forces now begin to withdraw from Afghanistan, with a full withdrawal expected by 2014-15, the US, its allies and the Afghan government are actively seeking peace talks with the Taliban or indeed what has come be known as the Taliban – the coalition of the ultra-conservative opposition to the Karzai government and its Western allies. In the rush to secure a negotiated settlement, many fear Afghan women will lose the fragile gains made against oppression since the fall of the Taliban. Indeed, even attributing “gains” to the lot of women in Afghanistan is difficult. As much seems to have changed, still much remained the same. Conflicting narratives of the everyday lives of women paint what is, at best, a rather blurry picture.

It is understandably hard to change attitudes and ideologies in a decade of war. A BBC report on Tuesday on the long-standing tradition of Bacha Posh – disguising girls as boys exemplifies the challenges inherent to the ideological underpinnings of oppression against Afghan women. Some Afghans persuaded by economics and social positioning prefer boys over girls. “When you have a good position in Afghanistan and are well off, people look at you differently. They say your life becomes complete only if you have a son,” one Afghan mother is reported to have explained. In Afghan society, sons are a symbol of prestige and honour. And yet this is not a new practice. It is a centuries old tradition that has defied the best-intentioned Western efforts to bring enlightenment to a deeply fractured Afghan society.

But the reality of Afghan women belies the more noble justifications for this war. In a statement released on International Women’s Day earlier this month, Rawa, an Afghan organisation dedicated to advocating for the rights of women blames the US and Nato, as well as the legacy of the Taliban for the lot of women in the war ravaged country, said. “According to figures from the UN, almost 5,000 cases of violence against women were recorded last year, though the actual figure is several time higher than this,” they say. “The last 10 years of US and Nato occupied Afghanistan has been a burning hell for women and young girls who have been raped or gang-raped. According to a report of the European Union there are tens of women in jails who are rape victims but are imprisoned for being a ‘criminal’; rapists are high-ranked government officials or people related to them and Afghanistan’s corrupt judiciary made up of a number of stone-aged clerics can’t deal with or prosecute them.”

Despite the best efforts to help Afghanistan’s women, the maternal mortality rate in Afghanistan remains the highest in the world. “According to the State of the World’s Mothers 2011 report, 50 mothers die every day in Afghanistan while giving birth, something that doesn’t hold the slightest importance in the eyes of the treacherous Afghan government officials, minister and ministry of women’s affairs, decoration pieces in the parliament, NGOs and finally the US and west, that occupied Afghanistan under the pretext of women’s rights,” Rawa continues in their bitter tirade against the powers who have failed Afghan women.

What remains to be distinguished is whether there is a political will to create the circumstances for Afghan girls to be afforded the same freedom and respect as boys.

There have of course been significant measures taken to recognise women’s rights in Afghanistan. Even if it is in name alone, the greatest improvement is that women’s rights protections are now codified into law. The Constitution of Afghanistan, ratified in early 2004, explicitly guarantees “equal rights and duties before the law” between men and women. And yet while such constitutional changes have been made, for most Afghan women life has stayed the same, and for a great number of them life has gotten much worse. The misappropriation of development aid, shocking levels of government corruption and the ongoing Nato war with the Taliban have all contributed to worsen the circumstances in which women live in Afghanistan.

On Wednesday Human Rights Watch (HRW) is due to release a 120-page report titled I Had to Run Away: Women and Girls Imprisoned for “Moral Crimes” in Afghanistan. The report is based on 58 interviews conducted in three prisons and three juvenile detention facilities with women and girls accused of “moral crimes”. Almost all girls in juvenile detention in Afghanistan had been arrested for “moral crimes”, while about half of women in Afghan prisons were arrested on these charges. These “crimes” usually involve flight from unlawful forced marriage or domestic violence. Some women and girls have been convicted of zina, sex outside of marriage, after being raped or forced into prostitution.

Among the girls interviewed by HRW were the ones who had been arrested after they fled a forced marriage and women who had fled abusive husbands and relatives. Women and girls interviewed by Human Rights Watch described abuses including forced and underage marriage, beatings, stabbings, burnings, rapes, forced prostitution, kidnapping and murder threats. Virtually none of the cases had led even to an investigation of the abuse, let alone prosecution or punishment. Some women had gone to the police in dire need of help, only to be arrested instead.

“Running away,” or fleeing home without permission, is not a crime under the Afghan criminal code, but the Afghan Supreme Court has instructed its judges to treat women and girls who flee as criminals. Zina is a crime under Afghan law, punishable by up to 15 years in prison.

“The Afghan government and its international partners should act urgently to protect women’s rights and to ensure there is no backsliding,” Kenneth Roth, executive director of HRW, says in a statement released with the report. “President Karzai, the United States, and others should finally make good on the bold promises they made to Afghan women a decade ago by ending imprisonment for ‘moral crimes’, and actually implementing their stated commitment to support women’s rights.”

Appeals to the powers-that-be however achieves little except political posturing. As prominent Afghan women’s rights activist Malalai Joya told France24, women’s rights in Afghanistan have been a call to war – a call that has undermined women themselves. “Afghan women are squashed between three enemies: the Taliban, fundamentalist warlords and troops… it is moulding the oppression of women into a propaganda tool to gain support and staining their hands with ever-deepening treason against Afghan women.”

Afghanistan has been the test case for the global community’s response to the perception of the Muslim world’s barbaric, institutional misogyny. Still, women’s rights were never a serious reason for invading Afghanistan. It was, at best, a fig leaf – a self-serving justification.

Ordinary women, even under the yoke of oppression, have the ability to stand up for themselves. The politicians have long failed Afghan women. The humanitarian intervention into the condition of women has been blunt, clumsy and altogether inefficient. It is the ability of women to uplift themselves that must be emphasised. In Afghanistan today, several vibrant human rights movements like Rawa and activists like Joya have voiced their opposition, and it is they who should be allowed the space to help determine the future of women in Afghanistan. DM Photo: A woman holds her child as she waits in line to receive aid donated by the Turkish government in Kabul on 5 March 2012. REUTERS/Omar Sobhani.