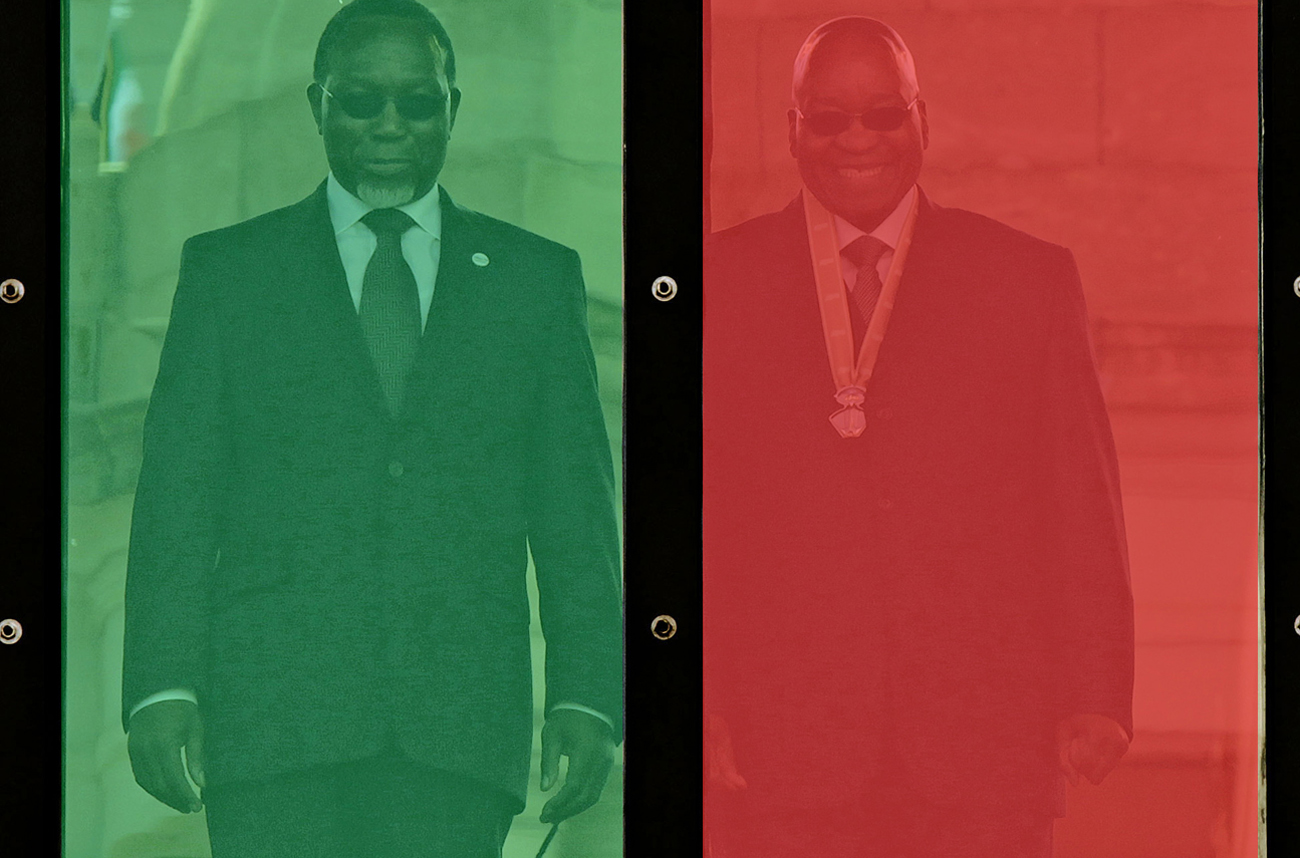 You’ll have noticed that all talk of a “lame duck” Jacob Zuma has now ceased, thanks to a few strategic sackings he’s made in the last few months. So it is easy to see why the prevailing opinion is that he will win a second term as ANC president in Mangaung. But the rumours of Kgalema Motlanthe potentially having a run at unseating Zuma will just not go away. And if not in December, then when? By SIPHO HLONGWANE.

There are many good reasons why ANC deputy president Kgalema Motlanthe will not want to run against Jacob Zuma for the top position in the party, and by extension, president of the republic. Zuma has yards of political capital, and deploys it well, like when he sacked Siphiwe Nyanda as minister of communications, Gwen Mahlangu-Nkabinde as public works minister and cooperative governance and traditional affairs minister Sicelo Shiceka. Zuma has come off really well after ANCYL president Julius Malema was sacked from the party. For now, there is no tsunami of disgruntlement like the one that brought him to power.

But there’s one very good reason for Motlanthe to run. He’s 62 years old. If not now, then when?

Motlanthe is one of the old guard. He’s a Robben Island alumnus. After his release in 1987, he served as secretary-general of the National Union of Mineworkers before replacing Cyril Ramaphosa as the secretary-general of the ANC. His ascendancy to become the deputy president of the ANC was virtually guaranteed after that. He is only seven years younger than Zuma, and there is a very large group of lesser ANC leaders like Paul Mashatile who would like to have their turn at the very top, thank you very much. If he can’t do it in Mangaung, then his time will have passed.

Since we’re talking an ANC elective conference, we have to talk about slates (the current leadership doesn’t like them, but they’ll happen anyway). Who is going to appear on Zuma’s slate, and who can he absolutely not count on for support come December? We’ve seen various iterations and versions of a Zuma slate, and the most recent one looks something like this: president – Zuma, deputy – Motlanthe or Cyril Ramaphosa, secretary-general – Gwede Mantashe, treasurer – Trevor Manuel. If Polokwane is anything to go by, Motlanthe will let him underlings make all the noises about running against Zuma for him. He’ll sit back and only pounce at the very last moment.

The people who are definitely not going to campaign for Zuma, or appear on his slate, are Fikile Mbalula, Mathews Phosa, Tokyo Sexwale, Cassel Mathale, whoever will be leading the ANC Youth League (we at the Daily Maverick tend to speak of the ANCYL as a homogenous bloc – while we sometimes take liberties with this handy shortcut, it has become something of a fact after the trial of its leaders) at the time and possibly Paul Mashatile.

The next consideration is what the exact dynamics of delegate support are. The sentiments of delegates are often different to those of ANC headline grabbers. If the rhetoric of the Zunami prior to Polokwane was an indication, Zuma should have cleaned out. Instead, he got 60% of the vote. It’s easy to forget that 40% of the ANC delegates (we can assume that they represent a fairly accurate picture of the branches who sent them) at Polokwane voted for Thabo Mbeki. In some provinces, like Limpopo and KwaZulu-Natal, populism plays a huge role in deciding how delegates eventually vote. Others like Western Cape, Eastern Cape and Free State are not as beholden to popular men and women. Provinces like Limpopo and Northern Cape are almost the personal fiefdoms of their provincial leaders. Eastern Cape, Gauteng and Mpumalanga have tended to be swayed by leaders with a national platform.

Thanks to his excellent track record in the province, and the fact that he’s a Zulu man, the ANC president can pretty much sign off on KwaZulu-Natal’s 240,000 members right now, who will instruct their delegates to cast a vote for Zuma. And thanks to Malema’s strong influence through his alliance with Mathale, and the fact that the provincial ANC leadership is pissed off about the national government’s interference in the running of the province, Zuma will not be able to count on Limpopo (though some parts may go his way, judging the December election results – Ed).

A province that is going to be crucial is the Eastern Cape. Unlike Limpopo, KwaZulu-Natal or Northern Cape, the provincial boss doesn’t have a national profile. And this is the province that was decidedly against a Zuma presidency, and also where Cope was expected to take a sizeable foothold. If there is a province that can turn out to be a proper fly in Zuma’s ointment, it is Eastern Cape. It always leads a large delegation to conferences (thanks to its 220,000 members) and could decide to avenge Mbeki at Mangaung. Let’s not forget that this newfound love by the national government for “nationalising” provincial departments started in the Eastern Cape. That hasn’t gone very well for the department or Cabinet because the province simply decided not to cooperate. Limpopo decided to treat such interference as an example of Zuma’s overbearing attention, and who is to say that the Eastern Cape won’t take similar offence? It’s almost as if Zuma has upgraded his beef with the Eastern Cape from the Mbeki kerfuffle to something more recent and offensive.

The question of provinces is where factions become important as well. People like Bheki Cele and Zweli Mkhize have great influence in KwaZulu-Natal. Phosa is very strong in Mpumalanga. Mathale and Malema own a big chunk of Limpopo between the two of them. So if someone with strong regional influence doesn’t appear on your slate, this is a problem.

What of the tripartite allies, you say? For a kick-off, the South African Communist Party is so deep in Zuma’s pocket that it has almost completely lost its voice after Polokwane.

While Cosatu is pretending like it doesn’t care about the leadership debate already brewing within the ANC, it has started drifting away from its solid support of Zuma. And since Mangaung will definitely not be about policies, in the same way that Polokwane was not (a reading of the ANC’s discussion documents for the upcoming policy conference confirm that view), at some point the union federation is going to have to ditch its “no leadership debate” stance and pick someone. Unlike pre-Polokwane, Cosatu isn’t united on this issue. Zuma can count on the support of Cosatu president S’dumo Dlamini – but the more influential general secretary Zwelinzima Vavi is understood not to be tickled by the idea of a second Zuma term. The bellwether National Union of Metalworkers has already broken ranks within Cosatu to say that they want “someone else” to take over after Mangaung. Of course, it is always a good idea not to be too taken up by what the unions have to say – for all their bluster, they aren’t swelling the ranks of the ANC as much as people like Vavi would like them to.

Another obstacle in Zuma’s way is that his corruption case refuses to bloody go away. It just will not. (We have the Democratic Alliance to thank for that.) It is a sore point for Zuma because it represents a legitimate threat to him. Something very tangible that his opponents can use against him, to great effect. Zuma probably rues the day he met Schabir Shaik, and if he doesn’t, he should.

Here’s something that Zuma will regret about Polokwane – he set a trend of a coalition of the wounded. Limpopo is wounded. Eastern Cape is wounded. The ANCYL is wounded. So are people like Phosa, Mbalula, Cele and Sexwale. Critically, none of these people have any major or official gripe with Motlanthe. Not only do they not openly dislike him, but he represents a credible vehicle for more power for these people. And this is how one makes it to the top of the pile in the ANC. You need people who need you. Slowly – very slowly – a critical watershed of opposition to Zuma is being reached.

It is a brave thing to do to bet against Zuma, but this is an election year, and temperatures are already high. If anything should go wrong for Zuma, his deputy Motlanthe will be there to sweep him out of Mahlamba Ndlopfu. DM

Photo: The then outgoing South African President Kgalema Motlanthe (L) and incoming President Jacob Zuma watch a flypast during Zuma’s inauguration at the Union Buildings in Pretoria May 9, 2009. REUTERS/Pool/Jerome Delay