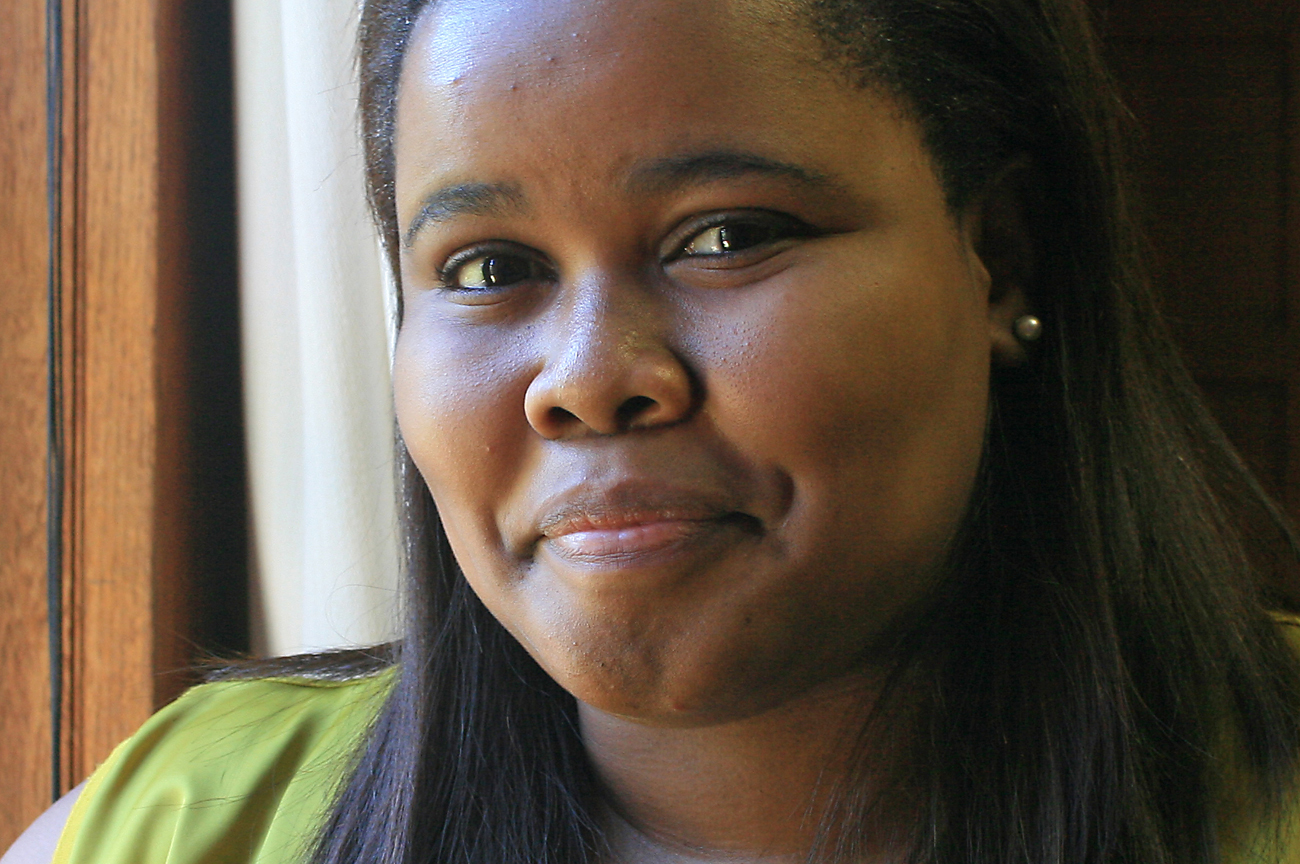 When Lindiwe Mazibuko was appointed the DA’s Parliamentary leader, much was made of her age, experience and ability to attract the black vote, key to unseating the ANC nationally by 2019. Almost six months into her new role, Mazibuko spoke about leadership and succession, experience and bipartisanship to OSIAME MOLEFE.

There is an Alice-in-Wonderland effect to see Lindiwe Mazibuko in her office. It was previously occupied by the domineering Tony Leon and the industrious Athol Trollip. Amid the large cherry-wood furniture and towering bookcases, Mazibuko appears to have drunk pishsalver and shrunk to a half her size. And like Tim Burton’s Alice, Mazibuko is resolute, strong-willed and wholly unwilling to conform to what society says she should be.

“When people take digs at my age, it’s like when they take digs at my gender or my race. It’s what I am. To state the obvious then to try to link it to a lack of ability is highly prejudiced and patently untrue,” Mazibuko said of accusations that she’s trying to run before she’s learnt to walk.

While her party’s and opposition MPs have accepted her new role and the authority that comes with it, the ANC and its tripartite alliance partners have not. So far, they have used her age and inexperience to launch scathing attacks.

During the debates in February after President Jacob Zuma’s state of the nation address, public enterprises minister Malusi Gigaba called her “grossly inexperienced” and “clueless” for telling eNews Channel that she did not think it was good for government to become too involved in infrastructure development. Deputy transport minister Jeremy Cronin took Mazibuko to task for saying Zuma’s speech was not bold enough only to “back-flip” days later. Arguably the most piercing criticism came from planning minister Trevor Manuel, who, quoting lines from Peter Tosh’s Equal Rights, said Mazibuko knew nothing of the everyday sacrifices needed to achieve lasting reconciliation.

But Mazibuko is unfazed by the criticism and pointed out that, by lining up its top guns to take her out, the ANC had shown it was “very nervous” of the changes in the DA.

“Unlike under Mbeki, when the ANC likened the opposition to croaking frogs, worthy only of being ignored, the party has become vociferous in its attacks on the opposition,” Mazibuko said, amused at the image of Cronin searching through the DA website for the material he used in his state of the nation debate speech.

Mazibuko owns up to her inexperience, but sees her fresher eye as a strength that allows her to see opportunities to innovate. She also remains hesitant to define her leadership style so early on, even though deliberative might be apt.

“People often asked me when I took up office what kind of leadership style I would adopt. Would I be like Tony Leon, more aggressive, distant and not engaging with the government, or would I be like Athol, more conciliatory and less on the attack? I couldn’t predict it because it was always going to be based on the issues, and on an issue-by-issue basis, I have tailored my response,” she said.

On labour broking, she cautiously supported calls for amendments to strengthen the regulation of the industry, but rejected Cosatu’s and the SA Communist Party’s call for an outright ban. Mazibuko and her party welcomed and embraced Manuel’s national development plan, yet remain critical of economic development minister Ebrahim Patel’s new growth path. When deputy president Kgalema Motlanthe and finance minister Pravin Gordhan expressed concern over the effects of the labour laws on growth, Mazibuko’s shadow cabinet has been quick with praise and concurrence.

Along with her shadow finance minister Tim Harris, she continues to call for the implementation of the youth wage subsidy. She accused Cosatu of hypocrisy for bemoaning poverty while at the same time blocking proposals to reduce unemployment. This, however, has not stopped her from courting the trades union on issues on which they agree, like the secrecy bill, e-tolling and corruption.

Most recently, she invited Cosatu general secretary Zwelinzima Vavi for a chat about the impasse over the youth wage subsidy. She says she is amenable to tweaking the subsidy to address any genuine concerns Cosatu has, but suspects the federation’s opposition is driven by a bull-headed adherence to ideology rather than any substantive concerns over the subsidy’s effects on workers. That is moot now as the invitation was flatly rejected.

In a recent speech to the DA’s KZN provincial congress, Mazibuko said the internal divisions within the ANC were at an all-time high. “A house divided cannot stand,” she said. But she denies that the DA is trying to drive a wedge between individual ANC ministers and tripartite alliance partners as part of, as Cronin put it, a “fool to divide-and-rule” strategy.

“There is no wedge to drive because it (Cosatu) has already thrown itself (out) into the cold and the ANC’s policies contradict (each other) with no help from us. For me, it’s much more important to achieve what we need, even if it means having to cross party lines to understand who is on the same page as we are and what that can mean in terms of lobbying power,” Mazibuko said.

She says she is proud of how her shadow cabinet members have rolled up their sleeves and perform their new roles. She also feels vindicated for the public campaign she ran to succeed Trollip, because the provincial leadership contests are also now public.

“I had absolute conviction about how important this (a public campaign) was because it had to be a litmus test for how internal elections work in a party other than the ANC. The DA has internal elections all the time, and this was the first time it had ever been this public. People don’t really know that a political organisation can have contestations and move on without toppling the organisation.”

Mazibuko contends that the ANC’s artificial bans on succession discussions and its leadership’s public disavowals of ambition only drive the campaigning underground, to the detriment of the party and the country. Echoing what party leader Helen Zille had said at last weekend’s provincial congress, Mazibuko said ambition lies at the heart of politics.

“People are turned off by the notion of bare-faced competition and are confused when it’s an acceptable part of democratic discourse. That is why the ANC’s ‘the party is calling me to serve’ philosophy seems so humble and nice.

“Standing up and saying ‘I’m the man for the job’, canvassing and testing your support, all these things seem venal, but they are not. They are part and parcel of democracy and can only be good for South Africa,” she said.

As her first full Parliamentary term as opposition leader draws to a close, Mazibuko admitted her body had taken strain. She had a bout of flu, but was not about to sit around feeling sorry for herself. Freshly returned from KwaZulu-Natal, she jetted out to Brandfort in Free State to join provincial spokeswoman Patricia Kopane on a 2km solidarity walk with the women of Joe Slovo informal settlement who have to walk that distance to collect water.

Like her party, Mazibuko is looking ahead to 2014 and campaigning furiously to nick wards off the ANC in the hope of building a greater local base ahead of the national campaign. There are 14 wards to be contested this week, all of which were in ANC hands. Eight of the wards are in troubled Eastern Cape where Zille led a human rights day march to the offices of the SA Democratic Teachers Union before making the controversial “refugees” remark. Eastern Cape, along with Gauteng, are where the party believes it stands a realistic chance of unseating the ANC, which is why Mazibuko campaigned there this weekend.

Mazibuko will hear nothing of slaying, neither Jabberwockies nor opposition MPs. She says she intends on steering clear of the ad hominem attacks that mark local politics, preferring instead to deal with the substance of issues raised. She does recognise, however, that she has a lot, perhaps the rest of her political career, riding on how the remainder of her term unfolds for her party. To achieve her goals, she says she looks to her caucus members, who she says are precious to her. But she takes ultimate responsibility.

“I cannot lead by consensus,” she says, “but I can be clear about why things are happening. Ultimately, I am going to be held accountable for all of this in two years’ time.” DM