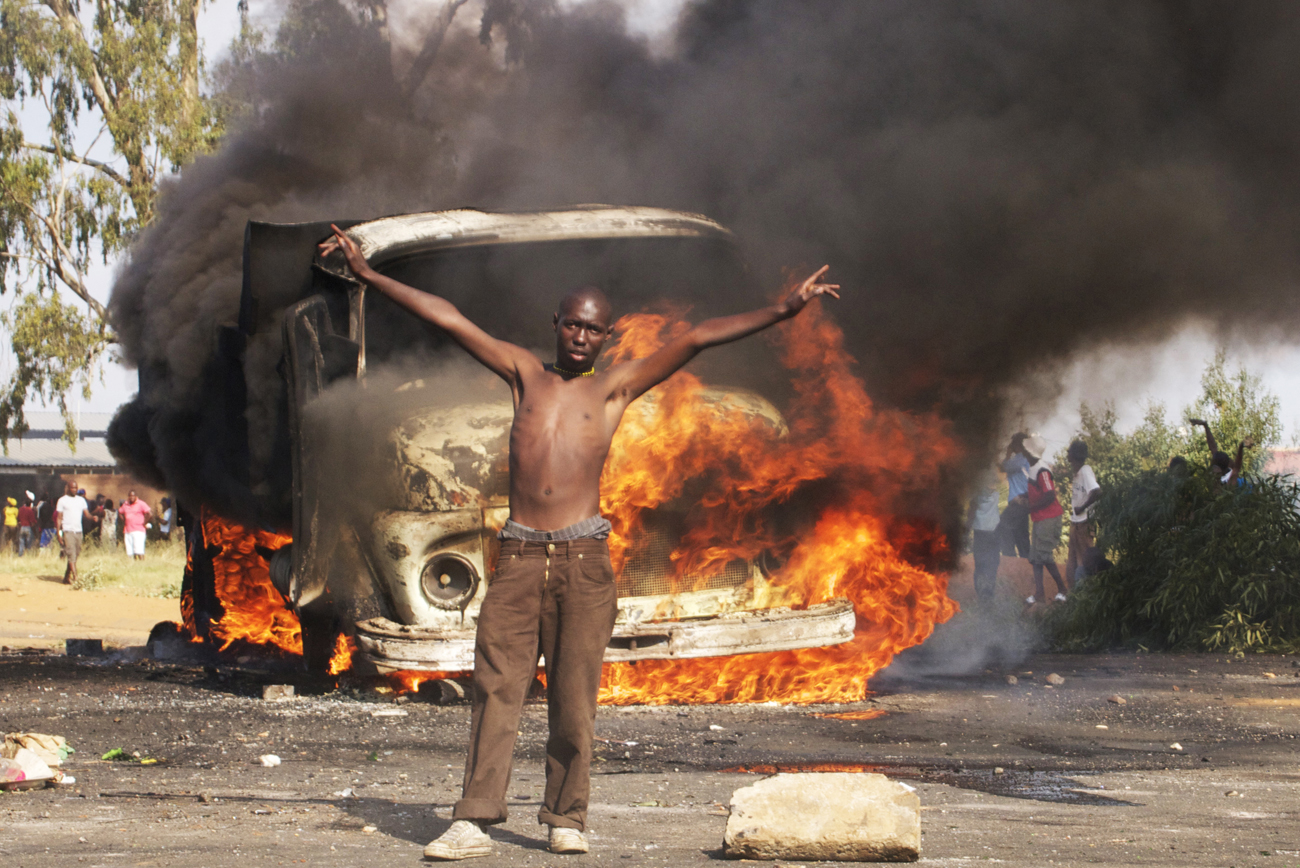 Residents in Ratanda, east of Johannesburg, are protesting against electricity prices, bungled bills and power cut-offs. GREG NICOLSON learned the hard way that the most aggressive demonstrators are extremely hostile and don’t fancy talking to anyone but the mayor or the president.

The road into Ratanda was silent between the fleet of parked police vehicles and the intersection where protesters had blocked the road. On Tuesday, I walked alone on the road dotted with rocks and homemade petrol bombs until I saw hundreds of people, mainly young men, many carrying weapons, shirtless and with scarves around their faces. They saw me, screamed and pointed. A woman standing near her fence spoke in Afrikaans. “Pardon?” I asked. “They’ll kill you,” she said. I kept walking, holding my camera above my head to show I was a journalist, before a hailstorm of stones rained down and I ran at full pace back up the road.

Violent protests erupted in Ratanda, near Heidelberg in Johannesburg’s east, on Monday with residents complaining about electricity prices, local corruption and the Lesedi Municipality not listening to their concerns. While the situation remained volatile, police said it was calmer on Wednesday after residents had been pelting police vehicles with stones and petrol bombs for the previous two days.

“The people are protesting because of electricity prices. That is all,” said a member of the Ratanda Community Forum (RCF). Residents complained that as the provision and billing of electricity is linked to the municipality and other services such as water, their power is being cut off when they haven’t paid one of a number of bills. The RCF member explained that residents have received extortionately high bills, viewed as a municipality mistake, but have almost no recourse to resolve the issue with the council. Those who challenged their bills were told to pay or they would face a 10% fine and have their power cut on the 15th of the month. Residents want to be billed directly by Eskom so their electricity costs are separate from other council bills.

Photo: Young men constitute the most aggressive group of protesters. They said they would continue to attack buildings until they are listened to. Their message, however, seems to have gone up in smoke. DAILY MAVERICK/Greg Nicolson.

The RCF does not support the rampant looting or damaging of property, but other protesters vowed to rampage until they’re addressed by Mayor Lerato Maloka (who has a history of no shows), or President Jacob Zuma. One of the older residents calmed others so he could make his statement.

“We want them to come to us and listen to us so that we can now solve this problem because we don’t have work here and they’re closing our electricity. We feel that this is our right and we should stand up. Even if the police arrest us at this present moment, we are prepared to go to jail,” he said before holding up a teargas canister and asking what damage it would do to the children. He asked why this is continuing when apartheid finished long ago to a cheer from the crowd. “We should involve comrade Zuma in our place. If he cannot come, we should forget. We will smash everything that we can.”

Colonel Dlamini, SAPS duty officer on standby, confirmed 80 people were arrested over Monday and Tuesday for charges ranging from public violence, malicious damage to property, theft and arson. He confirmed that two councillors’ houses were burned down, along with the library and two halls. Municipal offices were also torched while eyewitnesses say other buildings too have been set alight. There have been reports of rampant looting from stores owned by foreigners. A community clinic was also raided on Tuesday and municipal offices burnt down. Residents said on Wednesday night protestors were trying to take the police station. “We’ll remain there until the situation is under control,” said Dlamini, but he wouldn’t predict when the large police presence would be able to leave.

Photo: Some cars were stoned as they tried to pass protesters looking to take out their aggression. This man narrowly avoided being attacked after his tires blew and the car crashed while being chased by a mob.
DAILY MAVERICK/Greg Nicolson.

After visiting Ratanda on Tuesday, Gauteng housing MEC Humphrey Mmemezi condemned public violence but did not address residents’ concerns. “The law must be strictly enforced,” he said. “The police must ensure that law and order is restored in Ratanda.” Mmemezi reportedly toured the area to see the damage.

On Tuesday as protests also occurred in Sharpeville in Gauteng, Grabouw in the Western Cape and Phola in Ogies, Mpumalanga, the ANC urged South Africans demanding service delivery to be patient. “We know people are impatient with the pace of service delivery but government is constrained,” said Keith Khoza, ANC spokesman. Basic education minister Angie Motshekga also chimed in, referring to protests against overcrowding in schools in Grabouw. “It is quite sad that residents are misled into believing that government can eradicate the legacy of uninhabitable buildings, lack of resources and overcrowding in our schools immediately.”

But in Ratanda, protesters are mixed with opportunists capitalising on the chaos and are tired of waiting. Feeling ignored by the government, they want to exert their anger. Now that it’s ignited, they seem to be taking it out on symbols of authority or outside influence.

I left the area on Tuesday much the same way I came in. As the armoured SAPS vehicles pushed into a zone of RDP houses and protesters scattered, I used the opening to run into the town. The nyalas would park. Police would dismount, fire teargas then rush into a house and drag out a young man and throw him in the van before they sped off. Photo: Periodically, police drove through the groups of demonstrators firing teargas indiscriminately. “What will it do to our children?” asked one resident holding a spent canister. DAILY MAVERICK/Greg Nicolson.

Left alone, I turned onto the zone’s sole exit to see a car being stoned as it tried to escape a mob of young men. The driver swerved and crashed into a boulder then got out in and stood in shock, watching the mob chase after him. I pulled his arm and we sprinted until we found police able to offer refuge. They drove off as I, regrettably, searched alone for an exit. Sighting an SAPS logo, I sprinted through yards and hurdled over fences to ride the vehicle’s wake through the threatening mob. It outpaced me on the outskirts as I saw a sprinting body chasing me while holding a broken bottle and screaming. My glasses slipped and I juggled them until they fell, leaving me to sprint blindly up the road without looking back. Best to let either the mayor or the president take care of this one, I thought, slowing to a trot. DM Photo: Demonstrators in Ratanda have been fighting police with stones and petrol bombs since Monday when they started to protest over electricity billing.
DAILY MAVERICK/Greg Nicolson.