Eight Days: Thabo Mbeki in the eyes of his loyal disciple 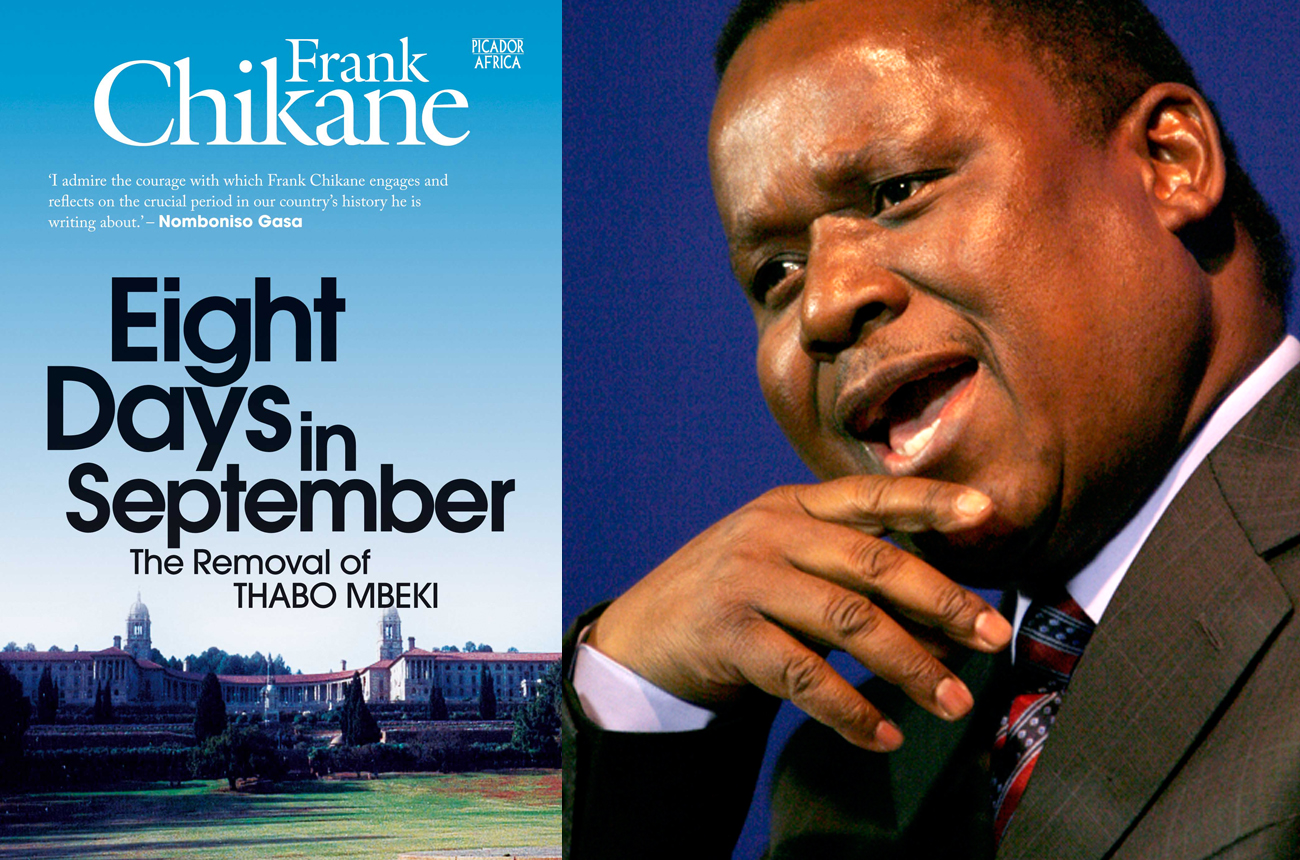 When you play the game of thrones, you either win or you die. And when you are victorious, you get to dictate what history says. By SIPHO HLONGWANE.

In the modern era though, the voice of the dead sometimes rises up to confound and disturb the present order of things. This is perhaps the best way to approach Frank Chikane’s account of the deposition of Thabo Mbeki, contained in his book Eight Days in September, the removal of Thabo Mbeki, as a sort of apparition that has risen from the ashes of our previous president’s ruined empire.

Chikane himself made little attempt to dispel the argument that this book was nothing more than an attempt to salvage Mbeki’s tattered reputation at a publicity event at the Troyeville Hotel on Tuesday night. The former presidency director-general and secretary of the Cabinet was in conversation with the editor-in-chief of the City Press, Ferial Haffajee. The crowd was constituted mostly of journalists and people hostile to the idea that Mbeki’s years could somehow be excused or explained away. As he did in the book, Chikane made it clear at the event that he wasn’t about to divulge any seriously salacious details or pieces of gossip. He is bound by all sorts of legal prescripts, he explained.

As a result of this, Chikane’s account of events comes across as one-sided and in aid of a particular agenda. Not that the author would deny this.

Also, it didn’t help things that Chikane has left Mbeki’s legacy, as far as his entire presidency is concerned, almost unremarked upon. This book only deals with the last eight days of Mbeki’s reign as the president of South Africa, we were told, and another one was in the works that would deal with his presidency and legacy in a thorough fashion. That one will be released in September.

All too often in the evening, Chikane said, “That issue will be dealt with in the coming book.”

Still, Eight Days is worth reading for what it purports to be, and the thoughts of its author are worth considering for what they are – a rare and intimate insight into the astoundingly cloak-and-dagger world of Luthuli House and Union Buildings politics.

By Chikane’s own admission, a few lower lips have been chewed at Luthuli House since the book was published. Not that anyone need have worried that much – the names that keep cropping up are the unavoidable ones: Thabo Mbeki, Jacob Zuma and Kgalema Motlanthe. The really juicy titbits are safely locked away in vaults under the guard of information classification regulations.

Instead, what we’re left with is a very colourful tapestry that paints Mbeki as the maligned hero at the centre of an unfolding tragedy. Chikane said that the height of the former president’s power was 2003 – then things went wrong when Schabir Shaik was charged for corruption. This eventually led to his imprisonment and the sacking of Zuma as the deputy president of the country. Things finally came to a head at Polokwane (which Mbeki was very aware that he was going to lose, Chikane assured us), where Zuma thrashed his former boss in the elections for the next ANC president.

Chikane is particularly sore about this point. At the Troyeville Hotel, he went on at length about how a crisis was narrowly averted through Mbeki’s selflessness. Apparently the people who were gunning for the erstwhile president were so eager to get Mbeki out that they trampled on procedures set out by the Constitution, and almost made it a coup d’état. According to Chikane, the ANC made the decision to recall Mbeki, communicated it to him and then dictated to him when that resignation letter should be handed in. To Chikane this action was no different to when the president of Madagascar was made to sign his resignation paper with a gun to his head. (Mr Chikane was probably refering to Maldives here – Ed) You’ll remember that constitutionally only Parliament can recall the president of the country through a vote of no confidence in him/her. So yes, there were questions about the ANC’s forthrightness in demanding that Mbeki should step down.

The point here, as far as Chikane is concerned, is to warn that the ANC has developed a taste for this sort of thing, and next time, we may not have a president noble enough to slip away quietly in the night. He pondered on what would have happened had Mbeki refused to step down at Luthuli House’s behest. The picture of open civil war that he painted wasn’t pretty.

In the final telling, Eight Days feels very inadequate. Chikane comes across as unsaying as much as he says. Hopefully that second book in September will be far better. DM