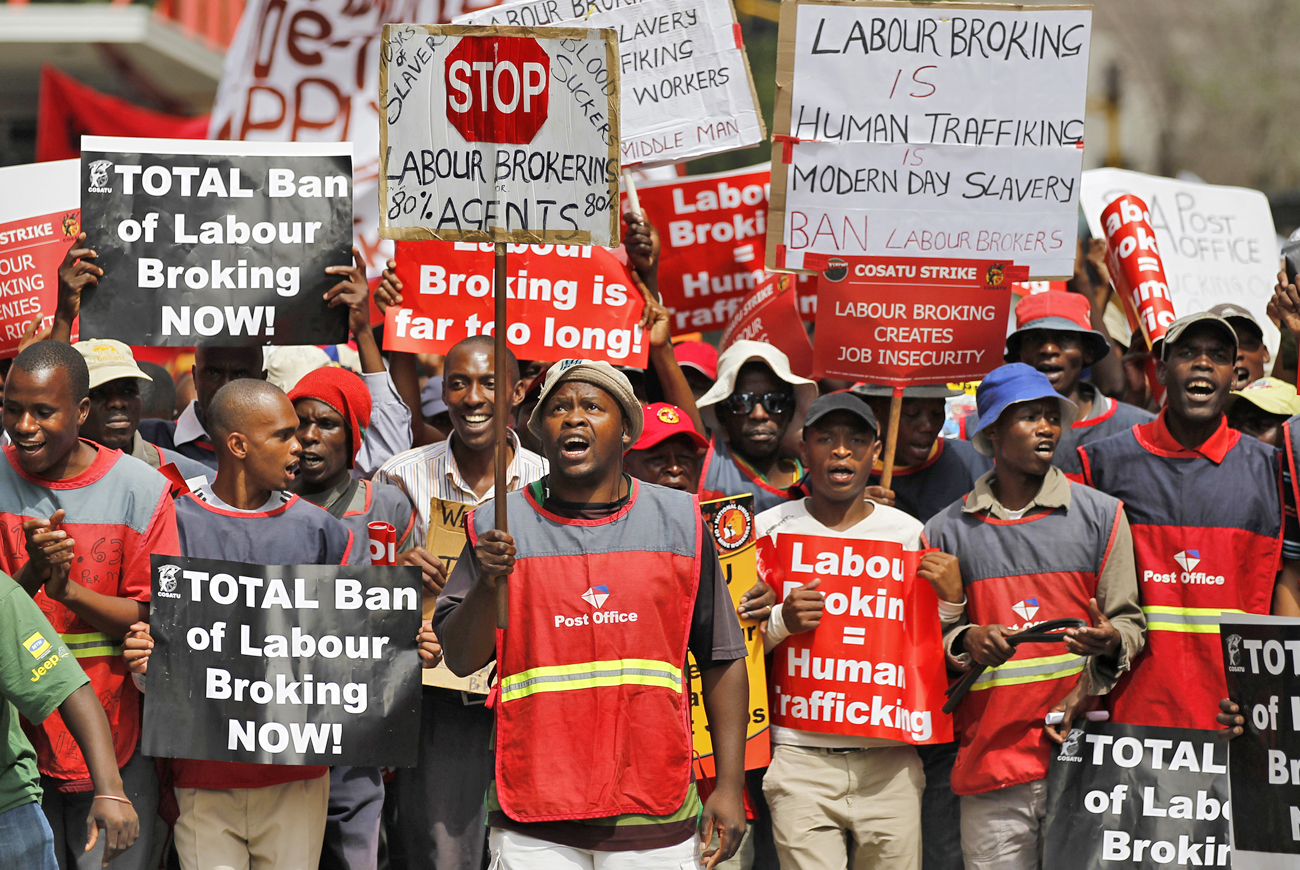 Relations between the various members of the Alliance are always changing. On the surface, senior leaders will always talk up the "good" points. And lately they've all been quick to say, since Polokwane, they are in a very good space. However, there are some issues on which they simply do not, and will not, agree. Increasingly, it's becoming clear that one of these issues is labour broking. By STEPHEN GROOTES.

The issue goes to the heart of the difference in interests between the ANC and Cosatu. The ANC’s interests are (or at least, should be) those of the country, boosting the economy, a better life for all, etc. Cosatu’s are very different. But dig deeper into the issue and you’ll see it’s been a big week for the Black Business Council. And it’s come down on the side of business and capitalism. Our hearts are indeed gladdened.

When you get right down to it, one man’s labour broker is an abusive bakkie driver, who takes workers then spits them out. Another man’s labour broker is a person who helps grow the economy by finding temporary workers, and thus feeding a need that then pushes money back into the pockets of those who need it – and are prepared to work for it. Unfortunately, as happens so often in our politics, the language on this issue has been overly broad.

Last week’s Cosatu-led march was, for the middle class media at least, about toll roads. It was a huge demonstration of public anger against them. But tap a Cosatu member on the shoulder and ask them and you would probably have get more than half the crowd saying it was about labour brokers. For Cosatu members, labour brokers are scum of the earth. They break the power of workers, by breaking the power of unions. A person employed by a labour broker automatically can’t join a union. They work only on a temporary basis. It’s not just those temporary workers who don’t have power. Their very existence threatens the power of permanent workers; they can always be sacked or replaced.

Cosatu’s opposition to labour brokers can perhaps be best understood in the crisp quote by political analyst Nic Boraine, who said Cosatu is simply looking after the interests of its class. In other words, its members. That’s perfectly fine. Cosatu has a mandate to do that. It has members to whom it has to account. There are structures which will have mandated its national office bearers (that’s right ladies and gentlemen, they refer to them as NOBs) to act in a particular way on this issue.

Now we need to look at the ANC’s stance. Its members tend to be from a broader stratum of society. It includes tycoons, toilers of the soil and the unemployed. Cosatu’s members are a more homogenous bunch. Any wealth they have, they own through pension funds and perhaps a modest home. It’s not quite the same spread of class.

So on Tuesday, when the ANC said it wanted to have a meeting with Cosatu to discuss this issue, it was a statement couched in a way that clearly shows it is not going to give up on the labour broking. It seems very clear now that the ANC has decided, and it’s not for turning, that labour brokers are here to stay.

It would seem this is only a political loss for President Jacob Zuma. Surely he would want to give Cosatu anything at this point? But, as we’ve seen lately, there is a strong pro-jobs bias, as opposed to “decent work” bias among some of the ANC’s top leaders. Gwede Mantashe is one, Pravin Gordhan is another. These two would not be moving without Zuma’s say-so. And they both have his ear.

It seems that what’s really happening is that the top-tier of the ANC is beginning, hopefully, to realise, that in fact the power of government, and by extension the party itself, is limited. That it cannot just provide employment by waving a magic wand, that running a mixed economy is hard and that solving our jobs crisis is going to be a generation-long mission. The lessons of governance can come particularly quickly sometimes, because there is a huge reaction, whether political or economic, to your mistakes. This could be a time when some of those lessons are coming home to roost. As a result, someone somewhere has worked out what would happen if labour brokers were banned immediately. Many government hospitals would not be able to operate as nurses wouldn’t be available, and many industries could simply come to a halt.

And our pavements would see many more people standing idly, hoping somehow to get a job, watching their life pass them by.

Into all of this, we see another reason for joy. The Black Business Council has stepped into the fray. Now let’s back up a bit. The BBC (I’m gonna get those initials wrong at some stage) was formed after the Black Management Forum’s bust-up with Business Unity South Africa. You may remember, BMF president (and former Labour director-general and current Cabinet spokesman) Jimmy Manyi wrote a stinking letter to Busa, saying it wanted to appoint the new Busa CEO – and if it couldn’t, it would leave, taking its ball with it. Part of that letter included that claim that labour broking “was not compatible” with the “soul of black business”. The BBC’s first public test put to the council after it’s formation is… “whaddya think of labour brokers”?

The answer is this: We welcome the decision to regulate (labour brokers) because we must appreciate the role they play in adding value to the economy. It’s a big longer than that, because BBC general secretary Sandile Zungu is making sure there’s a focus on the “uncivilised excesses” in the industry, but that’s the general gist.

This is important. It tells us that the Black Business Council is prepared to fight, publicly, for business. It’s not going to concentrate on which way the wind is blowing. It’s saying that it’s prepared to enter the debate, to get into the ring and to punch for what it wants. It means that it’s not going to be like the BMF, which has become more of a political machine than anything else.

This means there is another capitalist organisation in our midst. And – we say this carefully – it’s not, um, well, you know, racist apartheid white capital. It’s the Black Business Council, fighting for the interests of business.

Of course, in a perfect world, we wouldn’t have an organisation defined, kind-of, by race. But in our peculiar brand if imperfect politics, this could be just what we need. Someone who, through their name alone, has a form of legitimacy, who can say things other racist white capitalist organisations cannot. In short, this could be very good news indeed. DM

Photo: Supporters of the Congress of South African Trade Unions (COSATU) take part in a march in the streets of Johannesburg on 7 March 2012. (REUTERS/Siphiwe Sibeko)