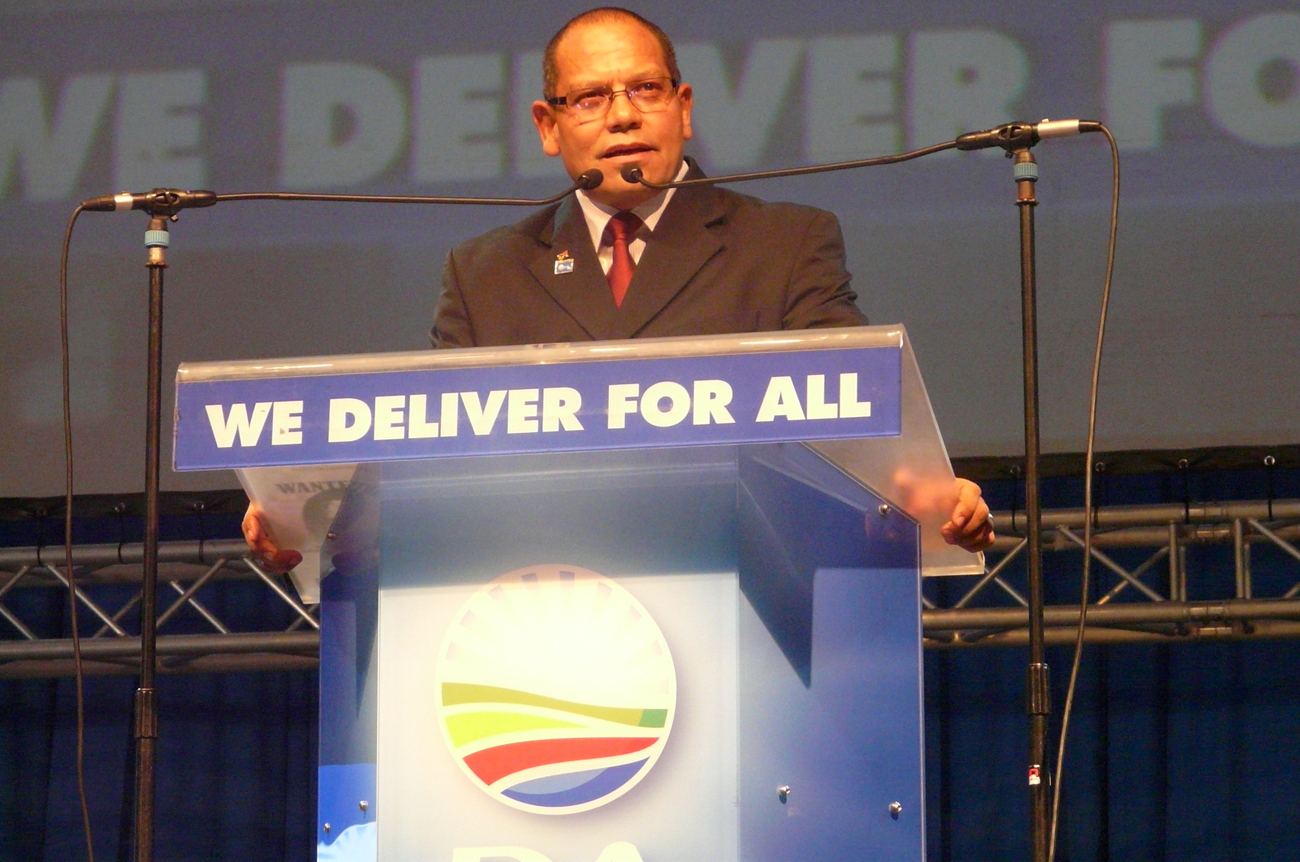 In the end, the result was inevitable – John Moodey, the candidate with the provincial experience and the right “transformation” credentials won the race to become the leader of the Democratic Alliance in Gauteng. The task he has is gargantuan. By SIPHO HLONGWANE.

Moodey defeated Ian Ollis on Saturday morning at the Heartfelt Arena Church, just outside the Thaba Tshwane Military Area in Pretoria, and the result announced shortly after 14:30. From an expected 1,005,  798 delegates cast their vote (and Moodey won a 63% majority, according to a source). Mike Moriarty won the race to become the party’s provincial chairman, and will serve for a second consecutive term.

Ollis ran a relatively public campaign for the position of leader, while Moodey ran the more traditional internal campaign. However, the final telling revealed that the Gauteng delegates preferred the candidate of colour, as the provincial arm of the DA now has its sights firmly set on winning the province in the 2014 national and provincial elections.

Contrary to the days of the Democratic Party, more than half the delegates at the Heartfelt Arena were black, and largely from traditionally disadvantaged areas of Gauteng. This is what most likely made the difference to delegates – Moodey is a black candidate with a strong, background as unionist and activist, and a solid track record within the party (he served as the provincial leader before Janet Semple, whose term ended on Saturday). In many ways, the new leader represents exactly the type of recruit the party wants to push up positions in its bid to transform its image away from the “party for whites” moniker it has.

Moodey’s task is an enormous one. Both the national leader of the DA, Helen Zille, and the party’s leader in Parliament, Lindiwe Mazibuko, said the next prize was the province of Gauteng. They both made it very clear that the reputation of the party now lies in its ability to capture the City of Tshwane, where the DA lost out by a seven percentage points, and also Gauteng. Johannesburg is within the radar, though it does not hang as low on the branches as Tshwane does. As leader of the party in the province, Moodey will have to lead the charge to seize the province from the ANC in 2014. In essence, he now carries the burden of the party’s growth.

After it captured Western Cape, Gauteng was always going to be an enticing target for the DA. It is the largest economy in the country, and the party already has more voters in absolute terms than it does in Western Cape. In purely partisan terms, it would be a devastating embarrassment for the ANC to lose Gauteng. The ruling party already smarts because the Midvaal municipality is DA-run. However, the number of people who vote for the DA will have to effectively double by 2014 (compared to the 2009 numbers) for the party to win the province.

Speaking to Daily Maverick, the new provincial leader indicated he had already applied his mind to the task ahead. “The first thing I have recognised is that the 1-million new voters we need are going to have to [come from] the ANC,” Moodey said. “So, why is it that we battle to make inroads in those communities? I believe we have never really introduced ourselves properly. The ground has been prepared through 18 years of broken promises. They are now waiting for us to introduce ourselves and tell them what we are about.”

He said his particular strategy would be to focus on people who previously voted ANC, but have since lost faith. Ollis, on the other hand, had said his strategy would have been to target new voters who will be casting their ballots for the first time in 2014.

Speaking of his new target market, Moodey said, “You first go for the lowest-hanging fruit. The people who have been forgotten and become disillusioned and refuse to go out to vote because they have not seen the DA as an alternative. It is those people that we will be targeting first. And I believe there is more than a million of them up for grabs.”

As a federally run party, there is plenty of emphasis on local power within the DA. Moodey said he recognised the party would have to brand itself differently in Gauteng, to meet the specific needs of the province. He said, “We have to employ a new marketing strategy to sell ourselves to a new constituency. That is what I am going to do differently.” DM