ANCYL: Forever defiance in our lifetime

ANCYL: Forever defiance in our lifetime 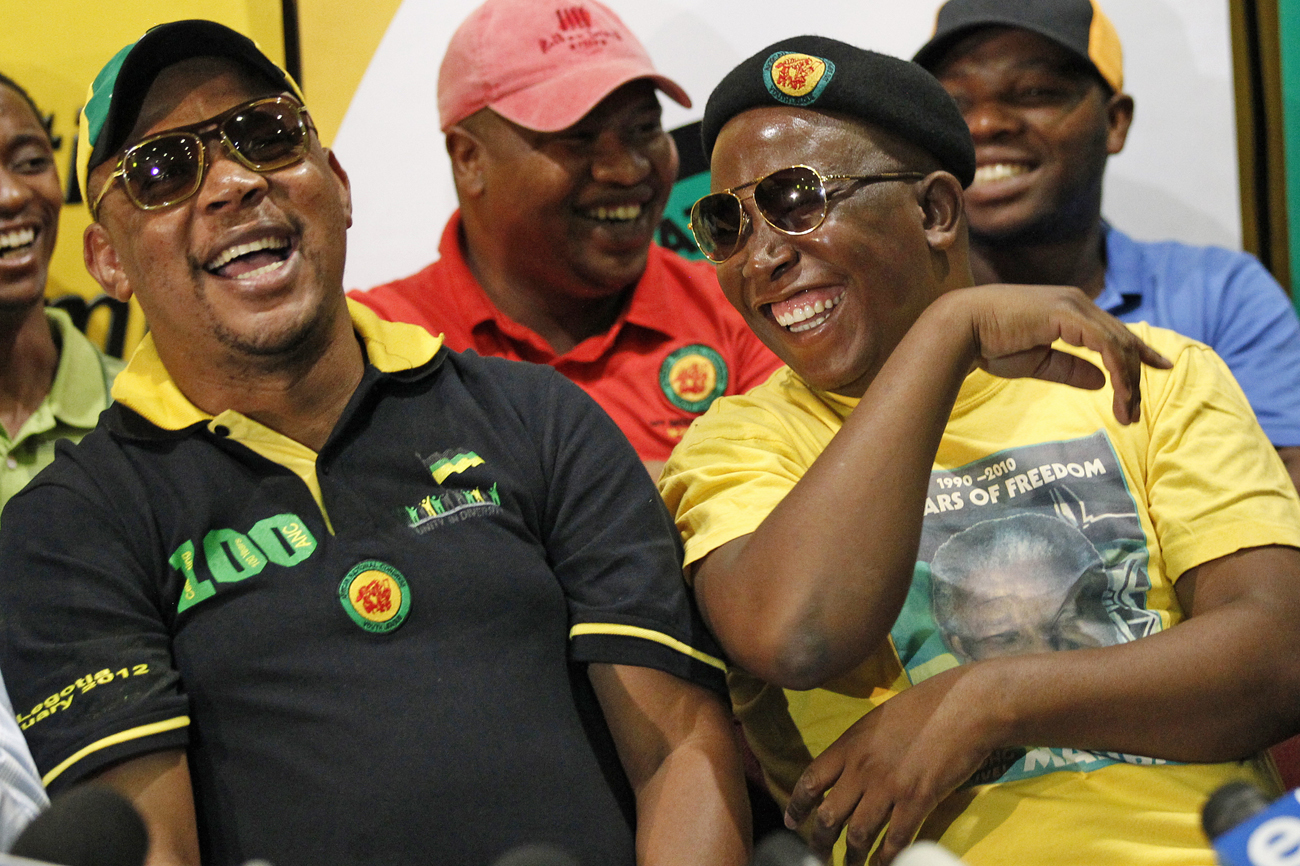 The Youth League made a big show of rallying its troops on Monday in the foyer of Luthuli House. Its choir simply intones the same old tune they’ve been singing for weeks now: Only they can recall their president Julius Malema. By SIPHO HLONGWANE.

The ANC Youth League has spent pretty much all its time in public since several prominent members were suspended from the party claiming it is the victim of a political conspiracy hatched by its enemies who don’t want “economic transformation”. Hence the charges against it are politically motivated. It’s also said it will gladly subject itself to the discipline of the ANC. Also, the ANCYL is autonomous and only it can sack its leaders. But, just in case the ANC really goes through with the decision to suspend its leaders, the league is prepared to beg to stay. It’ll negotiate.

If this sounds incoherent and contradictory, it’s because it is.

Then Malema’s decision to insist on a hearing on mitigation of sentencing backfired horribly. He is now facing expulsion from the party.

That was last week. On Monday, the ANCYL offered its first public statement since that expected decision. The league now wants to “plot a way forward”.

This being Malema’s ANCYL, there could have been only one outcome to that meeting. Power has been consolidated, favours have been called in and strings have been pulled. At the press conference, a sizeable chunk of the ANCYL NEC was there, and also several provincial leaders of the league. Malema sat quietly throughout the conference. The talking was left to the others. It was all in aid of the “It’s not just me, it’s the whole ANCYL” narrative.

The statement that came trod the same old ground: the statements for which Malema has been sanctioned for are actually ANCYL policy positions, the mean things that ANCYL secretary general Sindiso Magaqa said to public enterprises minister Malusi Gigaba were made in the name of the whole league, and the spokesman Floyd Shivambu was convicted for a statement he also made on the collective’s behalf. And besides, Floyd said he was sorry.

All the provincial leaders, with the exception of Western Cape, stood up to voice their support of Malema.

You might wonder what’s in it for the provincial bosses. Well, the simple fact is that making a move now would be a massively stupid idea. Because of the ANC’s annoying love affair with process, it might take all of 2012 for Malema’s demise to become final. He has been given two weeks from 1 March to appeal his expulsion before the national disciplinary committee of appeals, and if he does not succeed in getting the verdict overturned, he can still appeal to the ANC’s NEC – and even to the national conference in December. Malema still has some way to fall. He still has a lot of power.

In fact, ANCYL treasurer general Pule Mabe took time to hotly deny that he has been trying to usurp Malema’s throne. “Those behind this malicious intentions harbour ill-intentions and create unnecessary public spat with a view of defocusing us on the agenda that seeks to liberate a majority of South Africans, a program that our President the commander in chief of Economic Freedom has been leading fearlessly, we remain one and will continue to be one until the next elective congress in 2014,” verbatim from his own specially prepared statement – and we didn’t make this up.

A few hours after the press conference, another ANCYL press release arrived in inboxes around the country, after Sowetan, The Times, Independent Newspapers, The New Age and eNews Channel ran a story which claimed that Mabe had been booted out of the ANCYL NEC for campaigning to take over Malema’s leadership.

This isn’t the first time that Mabe’s name came up when the successor to Malema has been discussed.

For now, it appears Malema pulled the same trick that saw him re-elected as ANCYL president for a second term last year. It seems the riot act was read to someone – very probably to a few provincial leaders to make them come out in public support of Malema. Mabe may have also been given a stern talking to.

Now is not really the time to be sussing out how the power struggle between different leaders might play out in Malema’s absence. The big lion may be wounded, but his roar is still the loudest one in the den of cubs. DM