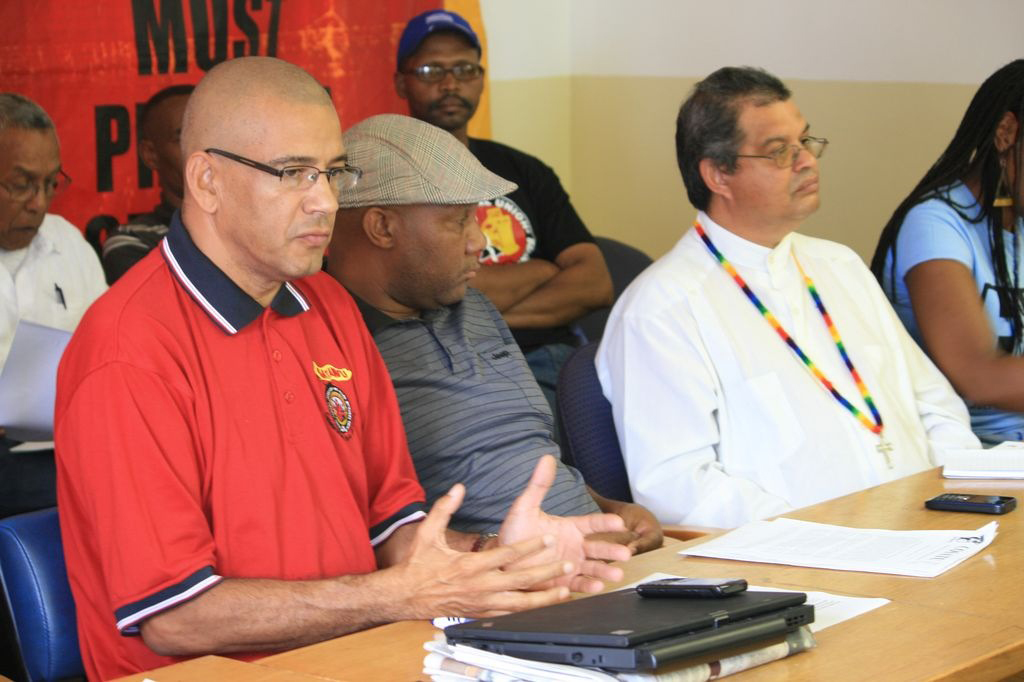 If it lives up to its billing, the Western Cape will on Wednesday experience the single largest mass protest in its recent history. Trade union federation Cosatu and civil society have bandied together to bring the province, and the nation, to a stand-still on 7 March in protest against labour broking, the tolling of Gauteng’s freeways, corruption and a hodgepodge of other leftie gripes. By OSIAME MOLEFE.

“(Labour broking is) nothing less than a form of human trafficking, reducing workers to commodities hired out to companies like sacks of potatoes, usually with no benefits, poverty wages and no job security,” Dan Melapi, Cosatu Western Cape chairman said on Sunday.

The federation has been lobbying for a number of years to end the practice, where a labour broker acts as the go-between workers and employers, theoretically adding flexibility to an otherwise rigid labour market. Cosatu, claiming that the system is inherently designed to allow the abuse of workers’ rights, has so far rejected the government’s moves to improve regulation rather than scrap the system outright.

Flanked by Cosatu provincial secretary Tony Ehrenreich and a grouping of civil society organisations, including the Treatment Action Campaign, Black Sash and the South African NGO Coalition, Melapi went on to say that the unions’ members and affiliates would also be marching against the proposed e-tolls on Gauteng’s roads.

Wednesday’s march will be part of (potentially) the first wave of nationwide Cosatu-led mass action against general poverty and inequality. In the Western Cape, marches are also scheduled to take place in George, Worcester and Vredenburg. Protest marches are also planned in most urban centres in the other eight provinces.

A second wave of nationwide protests could take place on 30 April, according to Ehrenreich, but that is not confirmed yet.

Ehrenreich condemned government spokesman Jimmy Manyi’s brazen warning last month that the e-tolling would go ahead on 30 April, no matter what anybody had to say. Ehrenreich and the other organisations represented said they found it outrageous that publicly elected representatives were in effect refusing to listen to the people that had put them in office.

“There have been a number of concessions made in the discussions that have happened so far, we don’t believe the concessions have gone far enough. It goes to the principle of privatisation,” Ehrenreich said.

People Against Suffering, Oppression and Poverty director Braam Hanekom and Black Sash programme manager Nkosikhulule Nyembezi said they did not believe the tolls to be just an issue for Gauteng or the middle class alone.

Nyembezi said that while public transport was exempt from e-tolling, in making demands of regular payments from users, it gave no consideration to workers in the informal sector. The system compromised the sustainable livelihoods of vendors who used their own cars to transport fruit and vegetables to sell on street corners or those who transported newspapers and scrap metal for recycling, Nyembezi said.

“You can’t lift the transport costs without affecting food prices. One of the biggest costs in the food manufacturing sector is transport, so they can’t think that prices won’t increase if they increase the price of transport,” Hanekom said.

Hanekom, whose organisation fights for the rights of immigrants to this country, added that labour broking exploited vulnerable foreign workers and made false enemies among the working class. The problem was that the legislative framework allowed the exploitation to take place, Hanekom said.

Cosatu concedes that the multiplicity of gripes and the different voices expressing them creates the risk that issues may drown each other out competing for attention, but believes the sheer size of the protest, more than anything else, will ensure that government listens attentively. Ehrenreich expects there to be in excess of 35,000 people at the march in Cape Town, including school children and their teachers, because the protest is drawing from a pool wider than union members. Emergency services, however, will continue to function as normal, he added.

“We foresee a circumstance where there won’t be a lot of education happening on the day of the strike, but we will pledge to make up the lost time because we don’t want to prejudice the children but we want to make sure that the issues that affect them are deal with,” he said.

It is not too late to stop Wednesday’s strike, according to Ehrenreich. All government need do is come out on Monday with an announcement that the labour broking has been abolished and that e-tolling has been scrapped. Now, how likely is it that will happen? DM