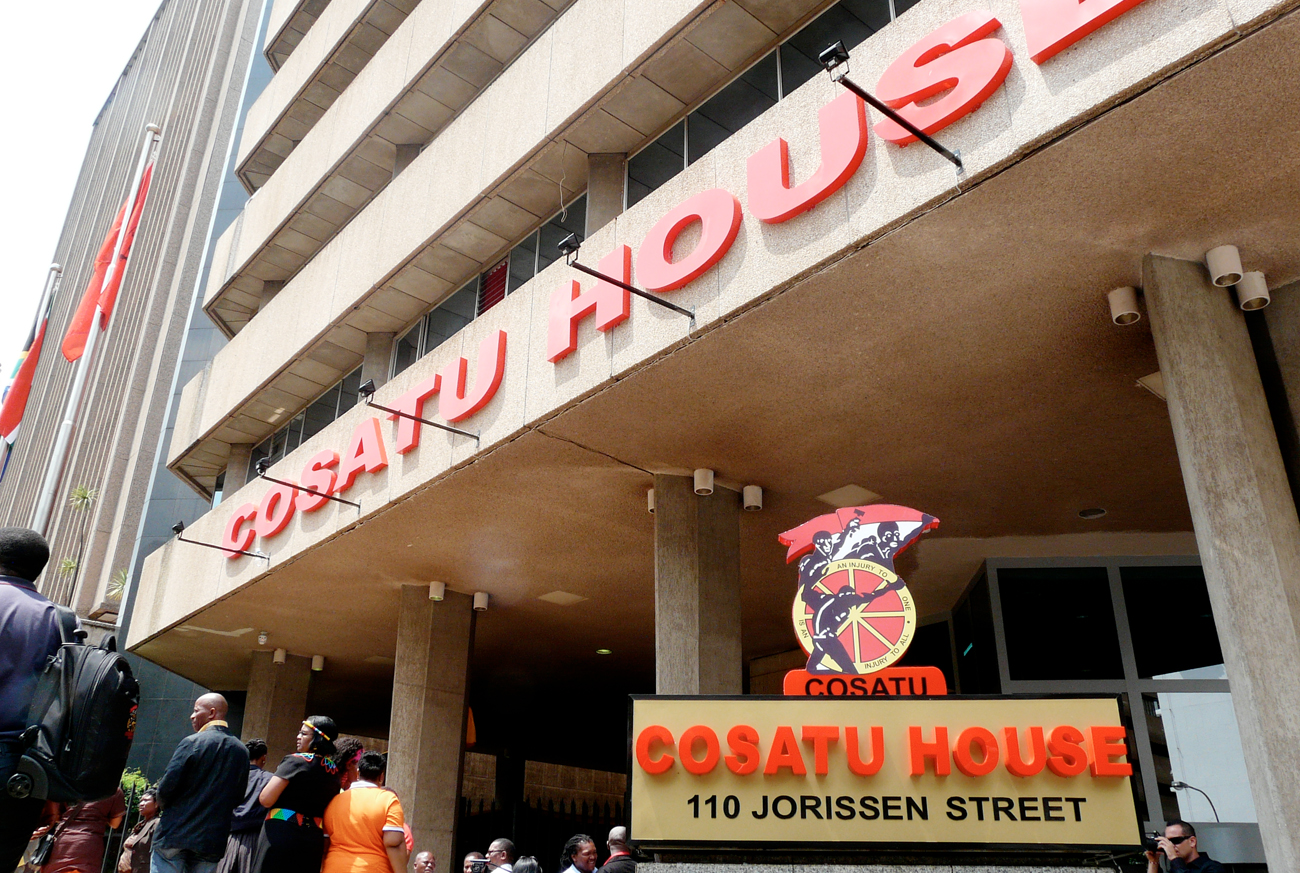 Cosatu opened its new headquarters in Braamfontein on Wednesday, and it was an opportunity for the unionists to let their hair down a bit, have a bit of a dance and a flute or three of supermarket bubbly. ANC president Jacob Zuma was invited along for the fun. You know, no politics, just back-patting and smiles. Well, almost no politics. By SIPHO HLONGWANE.

The Congress of South African Trade Unions have purchased, refurbished and opened a new headquarters in Braamfontein. Their old building, which sat like an old, brown and bedraggled sentry on Leyds Street just before Queen Elizabeth Bridge, has been replaced by a slightly better looking and more modern one on Jorissen Street. The new Cosatu House may spring straight from the humourless imagination of a 1970s architect, but you wouldn’t mistake it for anybody else’s HQ if you drove past. The union federation went to the trouble of commissioning someone to put up gigantic Soviet-red letters spelling out COSATU HOUSE across the front entrance, and a big, plastic effigy of the union badge squats before the front entrance.

On Wednesday Cosatu president S’dumo Dlamini, the general secretary Zwelinzima Vavi and the president of the ANC Jacob Zuma spoke at the opening ceremony. Zuma got a plaque out near the front entrance, proclaiming that he had declared the building open on 29 February 2012.

The nine-storey structure cost Cosatu some R50-million to purchase, via its investment vehicle, the Kopano ke Matla Investment Corporation. It boasts swish offices and boardrooms, a training and cultural centre, and a gym with steam room and sauna. Vavi even boasted that the entrances boasted bulletproof glass and other impressive security features. This is a building designed to withstand a minor siege.

Why, you ask? Well, those security doors really tell the story of Cosatu’s history.

The trade union federation was founded in 1985 and almost immediately came under massive attack by apartheid forces. In 1987, the first Cosatu House was bombed. In 1998, Adriaan Vlok the former minister of law and order appeared before the Truth and Reconciliation Commission alongside 22 other state security officials, to admit that they had planted the two bombs in the building. Though no one had been killed, the building had been so badly damaged that Cosatu was unable to use it. They only managed to establish new premises on Leyds Street in the early 1990s.

In many ways then, the new HQ will stand as a symbol for the union’s immense resilience. Its members now number in the millions. When the old Cosatu House building was opened, Vavi told the guests at the opening, they had numbered only 130,000 or so.

“All those memories shape the history of this federation,” Vavi said.

Cosatu will share the building with the South African Communist Party.

When it was Zuma’s turn to speak, he announced that nobody in a democratic South Africa would bomb the new Cosatu House. He also reiterated his call for closer cooperation between Cosatu, the SACP and the ANC in the tripartite alliance. “We may disagree on the strategies and tactics in achieving our objectives as a tripartite alliance, but our goals remain the same,” he said.

“The ANC needs to continue working with Cosatu,” Zuma said.

Zuma then took time to scold the media for apparently misunderstanding what he said at the National Union of Metalworkers of South Africa (Numsa) political commission. He complained that he had been quoted as slamming ANC Youth League president Julius Malema, when in fact he had  merely pointed out what the ANC expected of its youth. He said that the press did not understand politics at all.

He also said that his call for workers to swell the ranks of the ANC wasn’t an attempt on his part to subvert the union section of the tripartite alliance. “The point I was making is that if the African National Congress is the leader of the tripartite alliance and society that must change our society to a democratic one, then workers must be represented in it. Because [the ANC] is broad church with churchgoers, communists and capitalists in its ranks, the question you must ask is: who influences the ANC and in what direction?

The point is that it is a weakness for workers not to be in this church,” he said.

So there you have it. All is hunky dory in the tripartite alliance. And when Zuma speaks of the youth, he’s not speaking about anyone in particular…

Not that the tongue-lashing could cast a damper on the party. As the president’s cavalcade sped away, the venue was filled with the sound of popping bottles of bubbly. DM