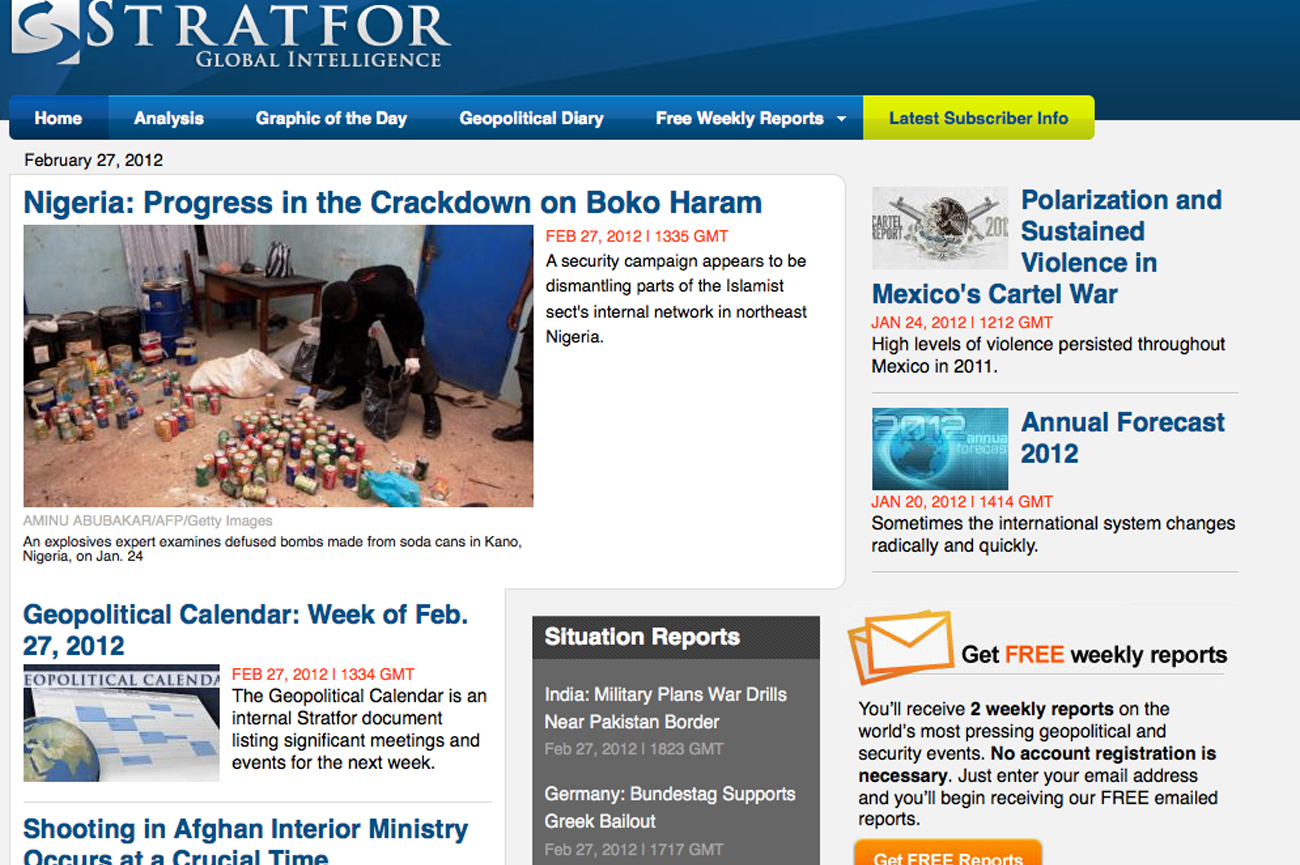 After an extended absence, anti-secrecy organisation WikiLeaks published a cache of emails from Stratfor, a US private intelligence firm. WikiLeaks accuses Stratfor of collaborating with dubious sources and targeting activists in its work. The company itself has slammed the leaks, and the extremely revealing nature of the emails is going to put a lot of people's noses out of joint, including many South Africans. By SIPHO HLONGWANE.

In January this year, George Friedman, the chief executive officer of Strategic Forecasting Incorporated (Stratfor) announced in a statement that hackers had breached the company’s security and obtained sensitive data.

That data has now surfaced in the hands of WikiLeaks, which began publishing the cache of emails along with a large number of international media partners on Sunday. The large cache has been dubbed The Global Intelligence Files and according to the WikiLeaks press release, it shows that Stratfor peddles in confidential information.

WikiLeaks said, “[The emails] reveal the inner workings of a company that fronts as an intelligence publisher, but provides confidential intelligence services to large corporations, such as Bhopal’s Dow Chemical Co., Lockheed Martin, Northrop Grumman, Raytheon and government agencies, including the US Department of Homeland Security, the US Marines and the US Defense Intelligence Agency. The emails show Stratfor’s web of informers, pay-off structure, payment-laundering techniques and psychological methods.”

So far, only a few hundreds emails have been released.

WikiLeaks also claims that the cache will reveal who Stratfor pays for advance information from diplomats and government officials around the world to give them insider knowledge of events, which the company was allegedly preparing to profit from.

When the leak was first detected by Stratfor in January, Friedman said in his public statement, “We are what we said we were – an organization that generates its revenues through geopolitical analysis. At the core of our business, we objectively acquire, organize, analyze and distribute information.”

Stratfor has called the leak “deplorable” and has refused to comment on the veracity of any of the published emails. The company claims that some of the emails have definitely been tampered with.

“Some of the e-mails may be forged or altered to include inaccuracies; some may be authentic. We will not validate either. Nor will we explain the thinking that went into them,” the company said in a message posted on Facebook.

In an interview with Reuters, the former WikiLeaks spokesman and poster boy Julian Assange put a different spin to the work that Stratfor does.

“Here we have a private intelligence firm, relying on informants from the US government, foreign intelligence agencies with questionable reputations, and journalists. What is of grave concern is that the targets of this scrutiny are, among others, activist organizations fighting for a just cause,” Assange said.

Among those scrutinised, according to the emails, include WikiLeaks itself, and the Bhopal activists The Yes Men.

So far, the most tantalising email to emerge is one that details a plan by Friedman to set up a hedge fund with the help of Goldman Sachs’s Shea Morenz, which would use the intelligence it gathered around the world to guide its financial activities.

The new fund, according to an email memo by Friedman “…would allow us to utilize the intelligence we were gathering about the world in a new but related venue – an investment fund. Where we had previously advised other hedge funds, we would now have our own, itself fully funded by Shea. Shea invested over $2 million in Stratfor”.

The fund, called Stratcap, is set up to be delinked from Stratfor, through various offshore share structures, but will definitely fall within the control of Stratfor. “Do not think of StratCap as an outside organisation. It will be integral… It will be useful to you if, for the sake of convenience, you think of it as another aspect of Stratfor and Shea as another executive in Stratfor… we are already working on mock portfolios and trades,” Friedman wrote.

South Africans are listed among the international investors in Stratcap, WikiLeaks alleged.

Friedman founded Stratfor in 1997 after studying political science at the City College of New York and then teaching Dickinson College for 20 years till in 1994. In 1994 Friedman founded the Centre for Geopolitical Studies at Louisiana State University. It described itself as doing integrated economic, political and military modelling and forecasting.

Stratfor, listing among its client the Central Intelligence Agency and the US Marines, is understood to have become very influential in post-9/11 US foreign policy. Friedman himself is an outspoken Republican.

Stratfor has maintained a great interest in South Africa, particularly the Zuma presidency. In 2007, the-then ANC deputy president met with US businesspeople at a meeting facilitated by Stratfor in Austin, Texas. After that meeting, Friedman described Zuma as a “very gracious man. I learned a great deal from him about South Africa and about leadership,” he said.

In an article it published on its website, Stratfor considered the power tussle between Zuma and what it saw as a Sotho-Xhosa ethnic alliance opposed to him.

The Stratfor analysis said, “Zuma is waging an aggressive re-election campaign, and his ANC rivals, including Motlanthe, have yet to form a stable and credible counter-alliance. Should the opposition continue to falter, it likely will decide not to challenge Zuma. In that case, the Sotho elites likely would bide their time until the 2017 ANC leadership race and 2019 national presidential election.

“By that time, Zuma will have customarily stepped down after finishing his second term as party and state president, and a pan-Sotho alliance would have a better chance at fulfilling its ambitions,” the company wrote.

On Monday, Mail & Guardian editor Nicholas Dawes said that he and two of his investigative reporters had met with a Stratfor representative, but the newspaper had never made a deal with the company for information.

“Journalists maintain relationships with sources from many spheres of society because we need to gather information that helps us to understand our world and to tell stories,” Dawes wrote. “Sometimes these relationships involve the sharing of information that is not yet in the public domain, as a story is researched. This process requires careful ethical management because our counterparts may be people who have dubious agendas or problematic credentials, and because we have to protect our own integrity and that of our other sources.

“Notwithstanding any hygiene measures we could have imposed, however, we were uncomfortable about binding the M&G to any deal with Stratfor, both because of the potential ethical risks and because of the perception that we are contracting with an organisation with links to foreign government agencies and companies,” Dawes wrote.
Speaking to iMaverick, Dawes said that journalists meet with all sorts of people as part of their work. “What I characterised [in the article] is the open nature of what the meeting were about,” he said. “What we discussed is pretty open stuff.”

Dawes said that a meeting with any source is not an endorsement of their views or activities.

On Monday evening, several blogs and websites which claimed links to Anonymous (the hacker group which claims to have got the data from Stratfor) claimed that Friedman had resigned from Stratfor. This information was apparently obtained through a new hack were an email sent internally by Friedman was intercepted. It must be stressed that no reputable news houses or Stratfor have reported Friedman’s resignation and thus the rumours of his resignation remain just that for now: rumours.

Even though the company itself has labelled the data as tainted, it would appear from the emails that have already been published that no confidential information was redacted. Names and email addresses appear as is. As more data gets published, there’s a great possibility that confidential information such as the banking details of sources and clients could be thrown into the public domain. How Stratfor could survive a storm caused by such a revelation is hard to see. DM

Photo: Stratfor has been hit hard by Wikileaks. SCREENGRAB.