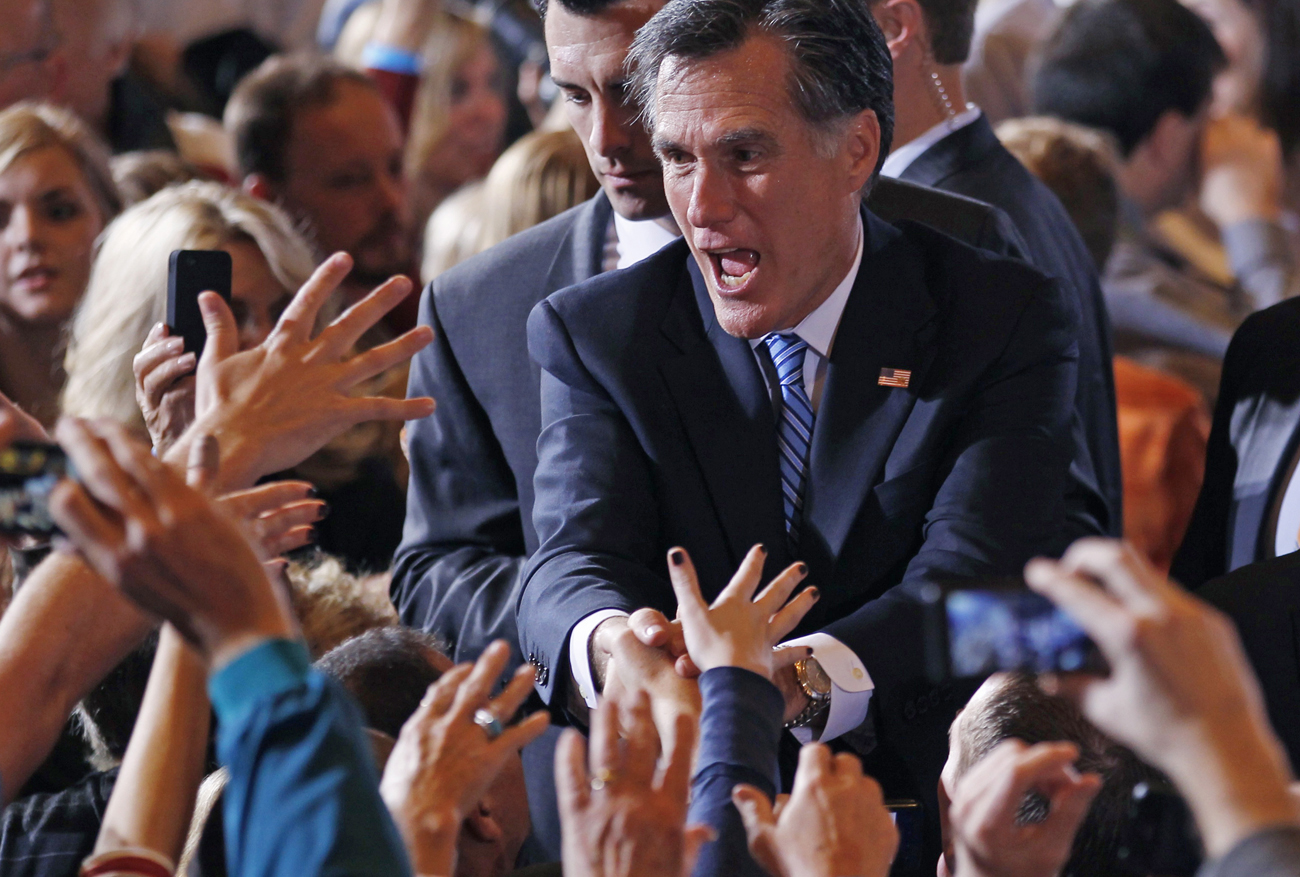 American presidential elections are about the domestic economy. However, little is known about the views of a candidate on entering the race, this is so fixed in the minds of his aides, he is seen as their property to shape. The world beyond the USA matters little. By J BROOKS SPECTOR.

Voters were asked to pick the issue they believed to be the most important for them at this point. Forty percent said the economy, 12% said health care, 11% social security and 10% the budget deficit. Everything else totalled only 28%. The war in Iraq drew 0%, Afghanistan 1% and international terrorism 2%. Iran wasn’t mentioned. Concurrently, with the exception of gay rights, Obama’s highest favourable ratings were strongly concentrated on foreign affairs while negatives were all in economic issues. This is a curious reversal of decades of Democratic party economic supremacy and being weak on security.

On 3 February, Mitt Romney trounced Newt Gingrich and Ron Paul in the Nevada Republican. Coupled with Romney’s Florida win, he has gained frontrunner status for nomination. On Sunday’s Meet the Press, Gingrich told host David Gregory, “Our goal is to get to Super Tuesday where we’re in much more favourable territory. We believe by the time Texas is over we’ll be very competitive in delegate count.” Gingrich’s strategy appears to be to keep trudging through the Super Tuesday contests, hoping to do well in southern states, and then, in a desperate effort, win the Texas primary on 3 April.

The Las Vegas Sun Times wrote: “Romney cruised to an easy victory in the Nevada Republican presidential caucuses Saturday by relying on a campaign organization he spent four years building and carefully maintaining. That organization became a firewall of sorts that allowed him to fend off a series of threats from Republican rivals who surged in popularity, including picking up victories in early states, but had no similar turnout machine to fall back on in Nevada.”

In his last two victories, Romney benefited from some large sums of money spent by the superPAC closely aligned with his campaign outspending Gingrich by five to one, if you believe his own numbers. This in spite of Nevada gambling mogul Sheldon Adelson’s major bet on Newt and his gift of gobs of cash to Newt’s superPAC.

Photo: U.S. Republican presidential candidate and former Speaker of the House Newt Gingrich looks at his watch as he speaks at a news conference after the Nevada caucus in Las Vegas, Nevada, February 4, 2012. REUTERS/Eric Thayer.

With this latest win, Romney moves on to Colorado, Missouri and Minnesota, and then on to Super Tuesday on 6 March when a number of states have their primaries and caucuses. This means the early style of the action with those interminable debates becomes increasingly hard to do.

Simultaneously, it makes money even more important. From now on, campaigning means the buying of expensive advertising. And accumulating the kind of money needed means finding friends who can contribute via the usual channels as well as newly important Section 527 superPACs that are far less restricted in how to raise money – or how to report timeously on who gave it to the superPACs.

So far Republicans have spent much energy berating Obama’s handling of economic policy – and then arguing among themselves about who could do better. But the focus on domestic economic issues may pose a trap for Republicans. In the past four months, national statistics have been showing a gradual but clearly perceptible drop in unemployment – down from around 9% to just 8.3% in January 2012. Analysts say that the economy needs to generate at least 150,000 new jobs per month to keep on this trajectory – and many economists now say this is eminently doable.

Other measures of economic health (business confidence, advance orders for capital equipment) are pointing to further economic gains. But, because of the way unemployment is calculated, people who have actually given up on the job search may return to job hunting. Paradoxically this can hike unemployment numbers in the short term, renewing the Romney-style argument that he knows how to create jobs.

Romney has demonstrated he has a tin ear over the economy that may lead to some rough moments when he faces the Democratic ‘A Team’, come the autumn. Over the past months he has said corporations are people too, that he loves to fire people, that earning around $350,000 a year in speaking engagements is pocket change and that “I’m not concerned about the very poor”.

The problem for Romney is that the cumulative effect of such soundbites can easily be converted into the message of, as Gingrich has already charged, Romney is the avatar of unfeeling ‘vulture capitalism’. And this comes just as the national conversation has turned to questions of fairness and equity in the economy, taxes and preferential treatment of big banks and corporations.

But it is also possible this domestic economic discussion can take a detour into international issues. The narrative of this year’s election remains unsettled. In recent days, the tension between the US and Iran has ratcheted sharply up.

In the New Yorker, Steven Coll recently noted: “Iran remains a perennially grim subject of presidential oratory and last week Barack Obama, while delivering his third State of the Union, added another entry:  ‘Let there be no doubt: America is determined to prevent Iran from getting a nuclear weapon, and I will take no options off the table to achieve that goal’.”

Leaving such options on the table can be a cautious, back-handed way of threatening war, Coll added. And on the same day as Obama’s speech Israeli Prime Minister Benjamin Netanyahu told the Knesset, “Only a combination of crippling sanctions and putting all the options on the table can make Iran stop its nuclear drive.” There is, of course, no solid proof the Iranians are building a bomb, but the ineffectiveness of a recent IAEA inspection visit failed to allay concerns.

In recent comments, Santorum, Romney and Gingrich have all been spoken approvingly about bombing Iran’s atomic sites or assassinating its scientists. With the exception of Ron Paul, the Republican contenders have vied with each other to come across as the alpha male in dealing with Iran.

This stems from a mix of genuine beliefs. Firstly, agreement with the principle of the importance of military strength and the use of force in foreign affairs, a calculation that this support for the positions of Israel’s rightwing government will produce electoral dividends in the form of fundamentalist/born again/evangelical voters, the possibility of more enthusiastic financial support from rich men like Sheldon Adelson, and even more fervent backing of neo-conservative writers like William Kristol and others associated with Commentary and The Weekly Standard. While they can hope, they do not realistically expect Jewish American voters to abandon their generational support for the Democratic party and its liberal social platform.

Beyond Iran’s inscrutable nuclear future, the ongoing violence in Syria and Egypt may also bring foreign policy closer to the conversation in the 2012 electoral campaign. The fact that multilateral diplomacy at the UN has been unable to generate effective international involvement in Syria may well be held up as yet one more reason not to rely on organisations such as the UN – as Obama has – to do anything substantive when it is hard going.

Similarly, the violence in Egypt could lead to an argument that the Arab Spring brought disorder to a vital region and the stability of the oil trade, led America to abandon long-time friends such as Hosni Mubarak and such dewy-eyed optimism now threatens the security of Israel, the international transport network via the Suez Canal and America’s remaining friends in the region who are less than ideal democrats.

And the Middle East isn’t the only foreign policy issue that could transform the tenor of the 2012 election. A collapse in eurozone rescue efforts and debt defaults would have major, and unpredictable, impacts on the economic recovery in the US. Further trouble in the Chinese property market could have major effects on US bond purchases raising interest rates dramatically to cope with the falloff of Chinese bond purchases. There is even the chance the Russian presidential election could produce a violent crackdown on anti-Putinists or charges by Putin that the US was behind the unrest and supported his opponents in the election there. Either way, not good.

Any, or all, of these issues could make a dramatic change in the way Americans have been thinking about this election so far. If some of these issues merge with voter fears about the domestic economy, it could spell trouble for the Obama camp in November, and give a ticket headed by Mitt Romney a fighting chance. The downside for Romney is that he has to somehow avoid looking pleased that things have suddenly gone sour – Americans like a fighter. In the face of such problems, Obama would have to assume just that role – and push the blame on the Republican-dominated Congress for thwarting his economic plans – thereby turning the election into a referendum on economic fairness in a dangerous world. DM