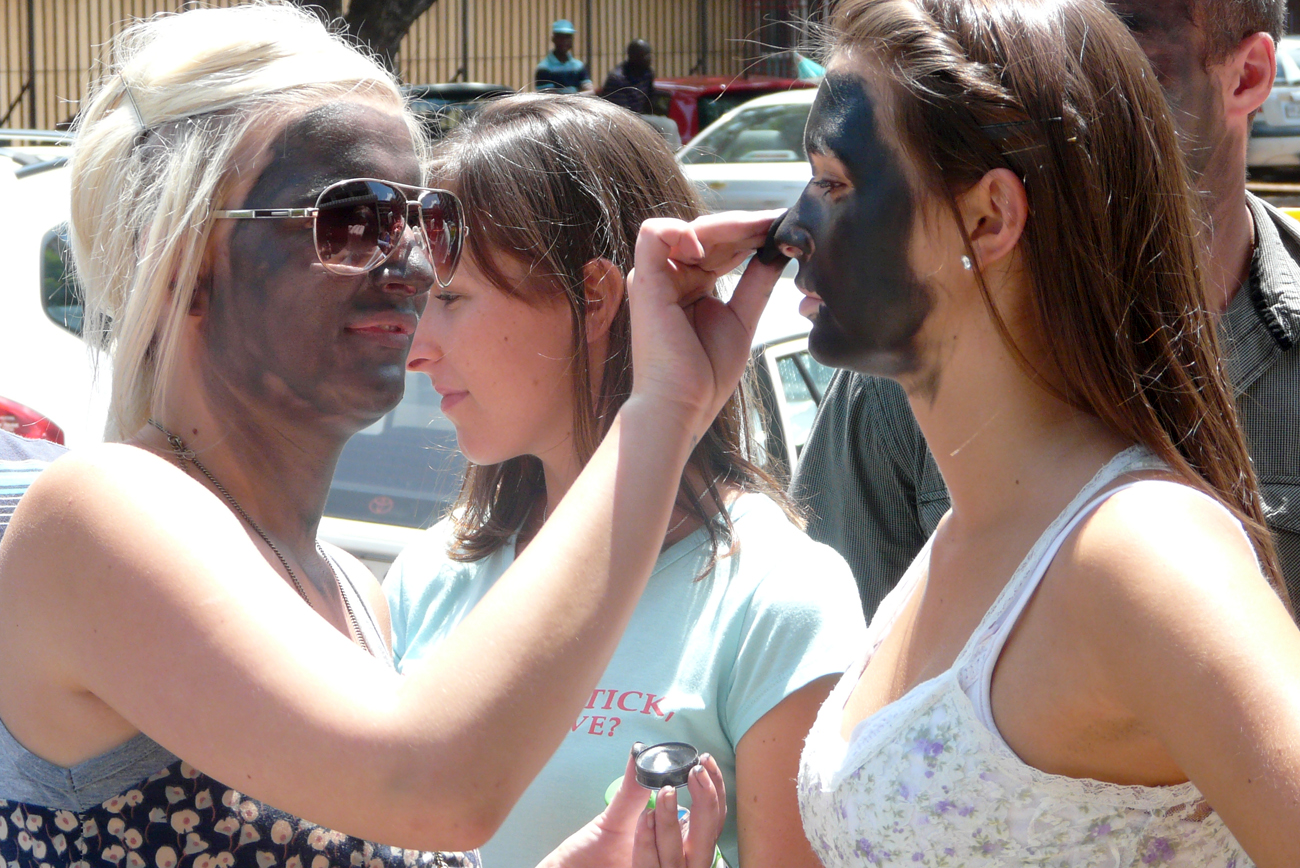 The message that the AfriForum Youth delivered to the department of higher education and training was erudite enough: make more space available at the veterinary faculty of the University of Pretoria so that academically gifted white students aren’t left out in favour of black students. What wasn’t as clear is why they chose to protest using “blackface”. By SIPHO HLONGWANE.

The message that a handful of AfriForum Youth protesters delivered to the department of higher education and training (DHET) offices in Pretoria on Monday morning was rather clear: the University of Pretoria’s Veterinary Science Faculty did not accept 30 highly distinguished applicants on the basis of their race. This is because the DHET, which partially funds the faculty, has decreed that the university has to reflect national demographics, which means that white students, who could have otherwise get in on their academic record, got excluded.

And it isn’t like the excluded students can just go study somewhere else either. The faculty at UP is the only one of its kind in the country.

There were 11 AfriForum Youth protesters in total, including two students who are among those who didn’t make it into the faculty and a parent.

AfriForum Youth wants the DHET to “address the shortage of veterinary surgeons in the country” as its uppermost concern. They propose that the department increase funding to the university so that it can accept more students.

Speaking outside the DHET building in Pretoria, Charl Oberholzer, the AfriForum Youth chairman, said, “We want the minister to look at the solutions we gave him today. The solution is to make more money available to make the veterinary science department bigger, to allow more people access to veterinary science, and to give young students the right to choose their careers.

The memorandum was accepted by Diane Parker, the acting deputy director-general for universities, on behalf of the minister.

According to information obtained from the university via a Promotion of Access to Information Act request, the faculty splits student applications into “designated groups” and “white students”. Of the 140 applicants that would be accepted, only 22 would come from the white group. This, said Oberholzer, is racial categorisation and means that it will not be the 140 best applicants who will make it into the faculty. The AfriForum Youth leader conceded that the faculty itself acknowledged that it was in a difficult position, but this was because this was the condition for accepting the department’s earmarked funding.

Oberholzer is a master’s in communications student at the university, and is locked in a separate dispute with the university over the results of last year’s students’ representative council elections. He has served in previous years as the president of the SRC at the UP.

The AfriForum Youth leader indicated that he was well aware of how controversial using blackface (a practice that has its origins in 19th century vaudeville theatre, where a white actor would play a grotesque caricature of blacks, while covered in black paint) in this protest would be. He said they did it because white students who were excluded from the veterinary science faculty felt that the policy dished out an experience to white students that can be equated to what blacks feel about blackface.

Oberholzer said, “The message we do want send is that painting ourselves black simply means how ridiculous it is to put so much emphasis on the colour of our skin. It is very controversial today to paint yourself [sic] another colour, but that is exactly how controversial the policy is. And students who apply to the faculty, that is exactly how they experience the policy.”

Oberholzer said that he and his organisation had nothing against transformation, it was the use of quotas that they had beef with.

“Empowerment is important and no one can take that away. We do believe in empowerment, but not the quota system,” Oberholzer said. “All students need to have access to education. That is why we are not saying that black students should be substituted with white children, we are saying: make more space to allow students in.” DM