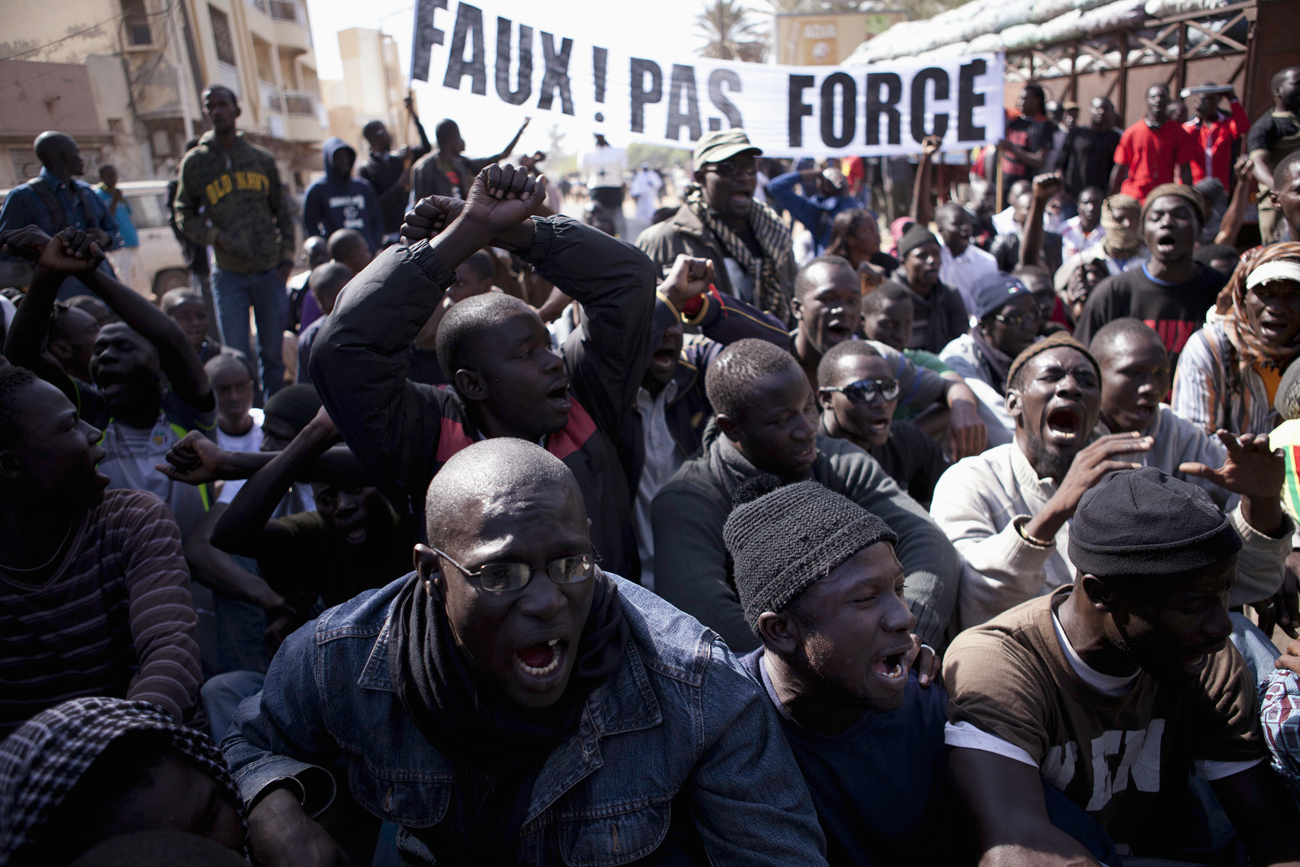 Less than a month before Senegal’s elections, the country’s top court decided who was and wasn’t allowed to run for president. In was incumbent Abdoulaye Wade, term limits be damned; out was singer Youssou N’Dour. Senegalese opposition reacted furiously, but it’s going take a much more coordinated response to unseat Wade. By SIMON ALLISON.

You don’t have to look far for a symbol of Abdoulaye Wade’s presidency. If you’re in Dakar, you just have to look up. It’s a monstrous, 49m statue of the “African Renaissance”, built to the specifications of the president himself. It depicts a topless giant of a man surveying the Atlantic Ocean, a woman clutching his rippled chest and a baby balanced rather precariously on his bulging bicep. Completed in 2010, It was to be Wade’s lasting legacy. But perhaps not in the way he envisaged.

Wade said the new monument would bring in huge numbers of tourists, an as yet unclaimed proposition, but also demanded 35% of the revenue generated because, he said, it was his inspiration and creative vision.

These murmurings of discontent against Wade’s presidency have, in the run-up to the presidential elections of 26 February, amplified into a furious opposition movement tired of Wade treating Africa’s strongest democracy as his personal fiefdom. Demonstrations have been getting bigger and denunciations of the president more vociferous, culminating on Friday in a night of riots in Dakar. Protesters overturned cars, threw rocks and burnt tyres. One police officer was killed. The rioters were dispersed with teargas and truckloads of riot police. Wade dismissed their concerns: “Stop these displays of petulance which will lead to nothing,” he said. “The electoral campaign will be open. There will be no restrictions on freedom.”

The riots were sparked by a court judgment which confirmed that Wade was eligible to run for a third consecutive term as president of Senegal – despite the fact that Wade’s administration amended the constitution to limit presidents to just two terms. Wade argues that as this amendment was only passed after he had begun his first term, that first term shouldn’t really count. As expected, the court bought this argument. At the same time they threw out the high-profile candidacy of superstar musician Youssou N’Dour on the grounds that he didn’t have the requisite number of certified signatures on his application.

The ruling has galvanised the opposition. “We are asking the people to remain alert and to resist Abdoulaye Wade,” said Abdoul Aziz Diop, spokesman for opposition coalition M23. “If Wade tries to impose himself on us…we will resist.” And from PTI Party leader Amath Dansakho: “Abdoulaye Wade has declared war on the people. The decision that we have just made will prove to Wade that this is a country of free people. We will render the country ungovernable,” he said.

This is easier said than done. Wade was already taking measures to protect his government, arresting 11 protesters. More arrests are expected. And he remains popular. Few analysts expect him to need a run-off to secure his next term. This would mean him winning more than 50% of the vote in the first round. He has particularly strong support from Senegal’s influential Mouride community. The Mouride Brotherhood is an Islamic sect comprising about one-sixth of Senegal’s population, and with an even larger influence; Wade counts himself among its membership.

With less than a month left, Senegal’s opposition has their work cut out for them if they intend to deprive Wade of a third term (or second, but who is counting). Making the country “ungovernable” might not be the best way to do that. Senegal remains a democracy, one of Africa’s strongest, and elections will go ahead. Better to fight Wade at the ballot box, by presenting a unified candidate with a genuine chance of at least taking Wade to a second round, where he will be a lot more vulnerable. But it might already be too late for that. The threats of violence are the last resort of opposition members that know they can’t prevent another five years of Wade’s government. DM Photo: Members of a Senegalese anti-government youth movement Y En A Marre (We’re Fed Up) chant slogans during a rally against President Abdoulaye Wade in the capital Dakar, January 27, 2012. A Constitutional Court decision regarding President Wade’s controversial bid to run for a third term during next month’s elections is due on Friday. REUTERS/Joe Penney