The DA youth poster that caused the storm 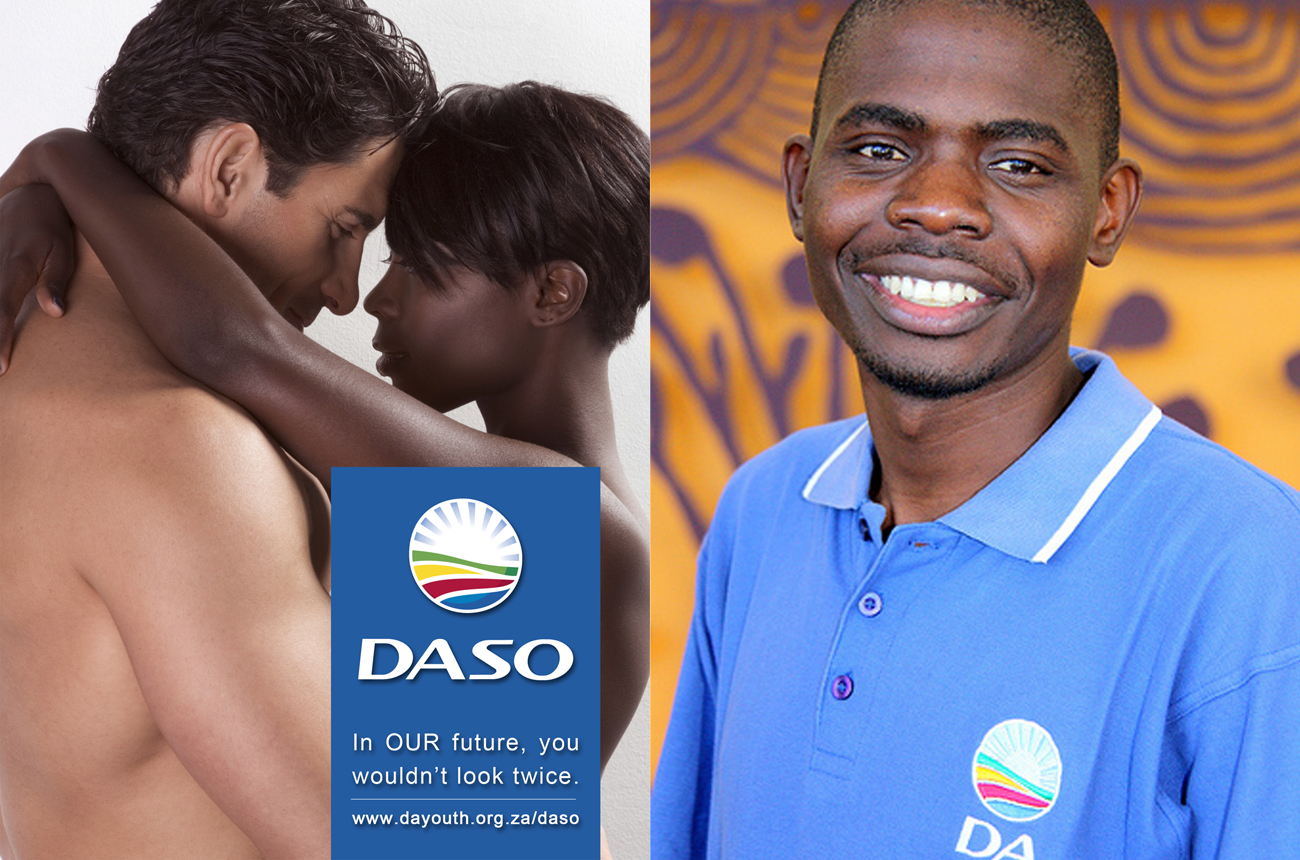 What was the idea behind the Daso poster showing a naked interracial couple that set the social media abuzz and, with the help of a few online news sites and radio stations, the public in general? It certainly got attention, but did it manage to make a meaningful contribution to race discourse? And what long term effect might this have on the DA, the parent body to Daso? By SIPHO HLONGWANE.

It all started when people connected to the DA Youth, like the leader Makashule Gana, sent out a message on Twitter, with a link to the poster, on 23 January. The poster depicted two naked people in an embrace: a white man and a black woman. The picture carried a tag saying, “In OUR future, you wouldn’t look twice”.

To say that the picture caused controversy in the social media would be putting it lightly. It generated a huge amount of Twitter traffic, and even spawned a few spoof images. The picture was also posted onto Facebook, where it garnered a breathtaking amount of outrage, most of it carrying undertones of disapproval at the nudity and miscegenation that was on display.

If the straightforward intention of the poster was to prod people into a state of shock, it was on Facebook where it hit the jackpot. However, things were a little different on Twitter. Though they did get the “how dare you mix races” reaction on Twitter (and quite a few unfunny attempts at humour), a lot of the anger was about a perception that this was a ham-fisted attempt to jolt people into reacting angrily about race. That itself caused offence.

The poster itself is part of an awareness campaign by the Democratic Alliance Students Organisation (Daso) – a part of the DA Youth – that is aimed at campuses.

DA Youth leader Makashule Gana said to iMaverick that the point of the poster was to “start” a debate on race [one might argue that it has never ended – Ed] among all South Africans, not just students. “We chose the students because we believe they are the leaders of tomorrow, and they have the capacity to discuss the future that they want to see,” Gana said.

The copy in the poster makes a very specific claim about non-racialism, in essence, that it is to be found in a future dreamed of by the Daso. One interpretation of this is that the ideals upon which a democratic South Africa was founded are best to be found in the Daso, or that it is only they who can lead the country to this Promised Land. The capitalisation of “OUR” future certainly lends itself to the latter interpretation.

Gana said that it wasn’t their intention to make an exclusive claim to non-racialism. He said, “We have never imagined ourselves as the only custodians of non-racialism. There are many people in this country who believe in the idea of a non-racial society. This is our contribution to the debate.”

The Daso fully anticipated the response. “The country is still polarised along racial lines. The important thing is that people are talking. We have achieved what we wanted, we can’t always bury our heads in the sand pretend as if race is not a factor,” said Gana, who in his capacity as leader of DAY (and thus Daso) had final say, and signed off on the poster.

One of the oddest responses came from the Christian Democratic Party, which somehow managed to make this about crime and farm murders. “In a country with high levels of Aids and an overdose of crime, especially the high incidence of farm murders this year, this poster sends the opposite message to the country than needed,” party leader Theunis Botha said in a statement.

Over the last few years, the only youth organisation that has dominated and led public debate has been the ANC Youth League. It helps that the ANCYL is attached to the largest and dominant party in the country, but there has barely been a chirp from DAY or any other youth body, save for a statement here or there from the likes of the Young Communist League, the IFP Youth Brigade and the AfriForum Youth.

Gana said that he is well aware of this, and is confident that this poster (and the uproar) it caused would help make the DAY more relevant. He said, “The poster will assist in positioning the organisation better in the public space. We can’t always be seen as reactive party, we need to drive debates amongst young people. We will lead discussions going forward… We will continue to raise topical issues that will have an impact in the future we want to build. We will not shy away from raising controversial issues, like we have done with youth wage subsidy.”

However, according to independent communications strategist and author Sarah Britten, what the DAY/Daso may have achieved is harming the Democratic Alliance brand in the long-run, especially among the young, black professionals it hopes to attract to its voter base.

“This is my major criticism of the ad from a marketing point of view [is that] it’s a short term awareness win, but a longer term positioning mistake,” she said. “What the DA haven’t foreseen is how an ad ostensibly aimed at a niche audience – students on campus – could backfire once it’s exposed to a broader one. I’m assuming they’re aiming this ad at racists at both ends of the spectrum.

“The trouble is, based on the comments I’ve seen, they’ve alienated a key potential source of growth for them, the middle class black 20-somethings who are disenchanted with the ANC,” she said.

The reactions by people connected to the campaign betrays a lack of self-awareness about how the poster and its message play off. The DA has always carried a strong “we don’t see race and you shouldn’t either” message. To try and have a neutral debate about race is impossible if it’s going to be led by the carriers (whether this perception is deserved or not is another debate) of such a message. It’s a bit like the ANCYL trying to have a neutral debate about land or the nationalisation of mines.

The DA has struggled so far to maintain a good balance in its message between acknowledging and dealing with present manifestations of apartheid, and “moving on”. There has been a lack of appreciation for what affirmative action has done to move talented black individuals into spaces they would otherwise have never occupied, in universities and work places. Part of this failure by the DA is not their fault: the discourse around race was almost permanently crippled in the post-Mandela years. We racialised everything, which muddied the waters and eroded trust. However, it is for the DA to decide to use a less patronising tone, at the very least, when addressing race.

There’s a valuable lesson here for communicators of all stripes: it is more difficult to make people think than it is to poke an angry reaction out of them, especially if what you’re doing is forcing them to assume a “backward” position, then admonishing them for doing so (maybe we should be congratulating ourselves a little more for the progress we’re making – it would certainly help to bring a little more calm to such discussion). And in South Africa, where the issue of race is still viewed with rose-tinted spectacles, there is “progress”, at least in the sense of what we deem to be shocking and controversial. An interracial couple no longer falls into that category. If it did, beer and network operator advertisements wouldn’t use that imagery so much.

“What’s considered publicly acceptable has changed, so even though there are plenty of racists out there (as we’ve seen from the comments), the official stance is that there’s nothing noteworthy about interracial couples,” Britten said.

“This is a problem that would have been avoided had they quietly challenged audiences to think instead of being so aggressive in their pigeonholing.” DM