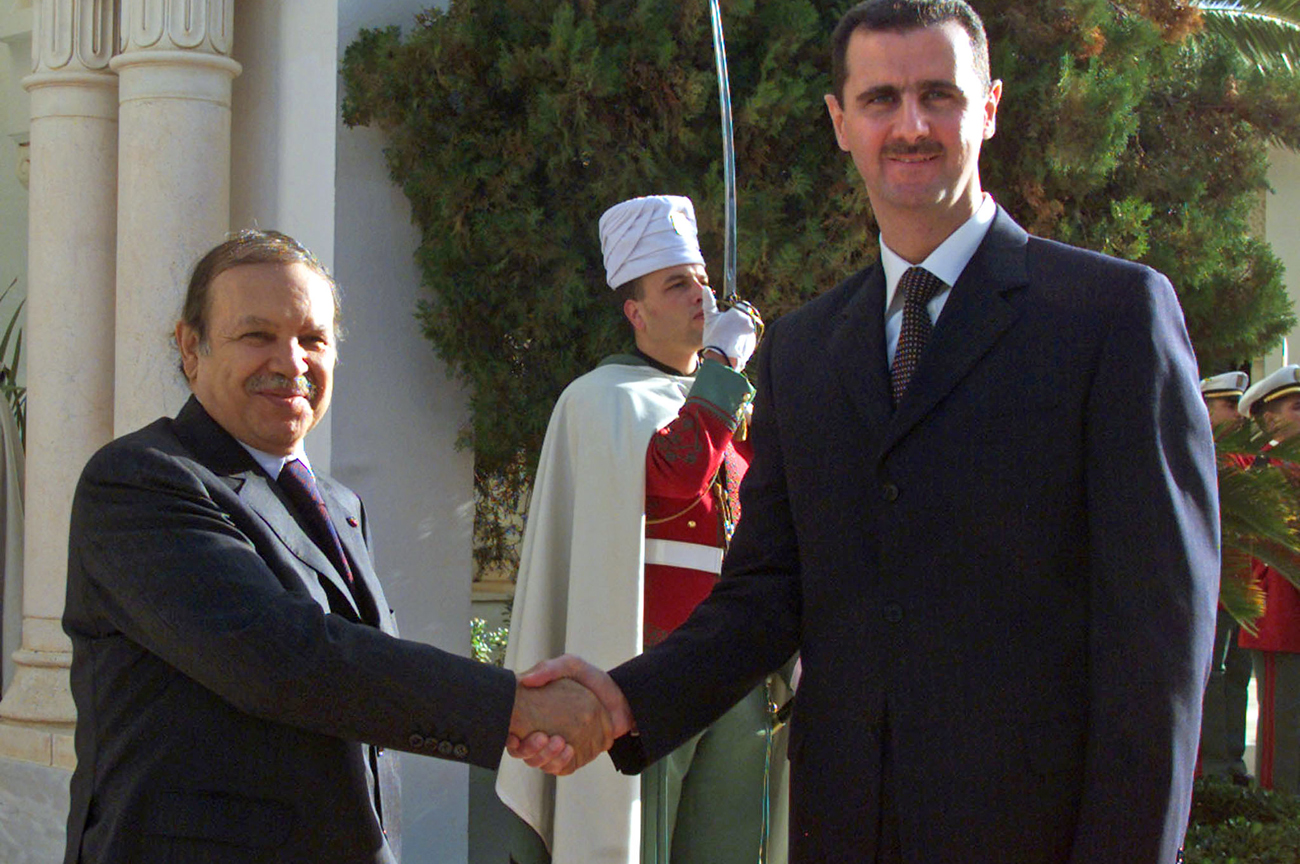 Despite continuing reports of violence in Syria, the UN Security Council has been unable to act on Syria since last October, when China and Russia vetoed a proposed resolution threatening possible sanctions against Damascus if it didn't stop the violence. Although Russia and China are both well known for their contrarian stances in international relations, Russia has especially been singled out for criticism over its support of embattled President Bashar Al-Assad. Iran is, of course, doomed to be the villain in the story but Algeria has also now voiced its approbation of Al-Assad’s reform programme. By KHADIJA PATEL

On Thursday Turkey claimed a Russian ship carrying weapons docked in Syria in violation of an EU embargo on arms shipments to Damascus. Greek officials say the ship was allowed to leave Cyprus because it claimed to be docking in Turkey. Turkish foreign ministry official Selçuk Ünal, citing information from the Turkish navy, said the ship docked at the Syrian port of Tartus instead.
While Turkish media have urged caution with the report, adding that it could not be independently verified, the Syrian port of Tartus is also Russia’s only naval base abroad.

Russia – or the Soviet navy as it was then – won the Tartus base in 1970 for supporting Bashar Al-Assad’s father, Hafez Al-Assad, lead a bloodless coup in Syria. The base lay forgotten and neglected until 2008 when Vladimir Putin ordered a major refurbishment. At the same time, Al-Assad found the opportunity to go arms shopping in Moscow. On his list were MiG 29 fighter jets, Yak-130 jet trainers, air-defence systems and P-800 Yakhont anti-ship missiles.

Bashar, like his father, has been obsessed with strengthening the dizzying array of the state security apparatus in the country. Syria’s “Mukhabarat”, military intelligence, the best known of the country’s various state security systems, has traditionally been the subject of folklore and fear under the Al-Assad dynasty. The Syrian-Russian relationship has been a mutually beneficial one but as Al-Assad battles to affirm his legitimacy as Syrian leader, it has also been a highly contentious relationship.

In November last year Russia, as well as China, vetoed a French-proposed measure to sanction Syria in the wake of a UN report documenting 3,500 deaths over six months of unrest. The US ambassador to the UN Susan Rice walked out of the UN meeting in apparent disgust, saying she was “outraged,” that opposition to the resolution was a “cheap ruse by those who would rather sell arms to the Syrian regime than stand with the Syrian people”.

Russia has, however, remained undaunted by criticism of its support for Al-Assad, echoing the Syrian leaders sentiments of a grand conspiracy. On Thursday, the head of Russia’s Security Council Nikolai Patrushev told Russia’s Kommersant newspaper that he had seen intelligence indicating plans for a foreign military intervention into Syria were well advanced.

“We are getting information that Nato members and some Persian Gulf States, operating according to the Libya scenario, intend to move from indirect intervention in Syrian affairs to direct military intervention,” Patrushev said.

“This time it is true that the main strikes forces will not be provided by France, the UK or Italy, but possibly by neighbouring Turkey which was until recently on good terms with Syria and is a rival of Iran with immense ambitions.” Intriguingly Patrushev claims America, in cahoots with Turkey, was already refining options for a no-fly zone that would allow armed Syrian opposition fighters to mass in designated areas.

Nato has vehemently denied the Patrushev’s claims, insisting it has no plans whatsoever to meddle in Syria.

Al-Assad however is unconvinced. He is suspected to be secretly bolstering his armed forces in preparation of any future international military intervention into Syria – all the while battling an uprising against his rule as well. The United States and European Union have banned arms supplies to Damascus, while the Arab League and Turkey have also imposed sanctions of their own.

It has fallen to Turkey to monitor the comings and goings on Syria’s borders for any suspicious activity. Turkey’s acrimonious relationship with Greece has certainly amplified reports of Greek-Cypriots allowing the Russian vessel passage to Syria, but the Turkish outcry over the Russian ship docking in Syria has not been the first instance of Turkey raising the alarm over suspected arms shipments to Syria this week.

On Tuesday a Turkish provincial governor said Turkish customs officials intercepted four trucks suspected of carrying military equipment from Iran to Syria. The governor of Kilis province said the trucks were confiscated at the Oncupinar border crossing into Syria after police received information about their cargo.

Turkey is currently negotiating with senior members of the Iranian government to begin talks with the West over its contentious nuclear programme. Turkish foreign minister Ahmet Davutoglu visited Tehran last week and on Thursday met with Iranian parliamentary speaker Ali Larijani in Ankara. Whatever the differences between Iran and Turkey are on Syria, it appears not to have affected their relations with each other. Despite the pious protestations of the Russians, Turkey and Iran seem to be getting along just fine.

If Turkey is successful in forcing Iran to talking terms with the Western world, it remains to be seen how such a development would affect Syria, if at all.

Al-Assad has been putting on a show of bravado over the past two days, addressing large crowds of his supporters while reports of artillery fire on civilians continue to emerge. The much-touted Arab League observer mission in Syria suffered a setback when an Algerian observer resigned from the mission, calling it a farce. Anwar Malek, who had travelled to Syria with the Arab League to gauge Al-Assad’s progress in implementing the Arab League’s roadmap, went rogue on Wednesday, speaking to various media outlets about the frustrations of the Arab League monitors. Malek, who withdrew from the monitoring team this week, said three colleagues had already left Syria because they believed their two-week-old operation had done nothing to stem Al-Assad’s violent crackdown on dissent.
Algerian foreign minister Mourad Medelci, however, distanced himself from Malek’s comments, insisting Syria’s government had indeed taken steps to defuse the crisis in the country.

“The government has taken some steps. Perhaps not enough, but some steps in the sense that there has been a withdrawal of heavy weapons from the cities that are having problems now,” Medelci said.
“There has been a release of a few thousand prisoners, but there are many more not yet released. And there has been an opening up of the media. Although this opening is not complete, it is real.”
Ahead of a meeting with US Secretary of State Hillary Clinton, Medelci voiced a rare confidence in Al-Assad’s intentions to implement the Arab League’s roadmap, raising questions about Algeria’s allegiances in the conflict in Syria. Algeria, of course, was one of just two countries, along with Syria, to vote against the Arab League resolution that called on the United Nations to impose a no-fly zone over Libya early last year, criticising policies of armed intervention.

Algeria is certainly not a friend of Al-Assad in the same vein as Iran and Russia, but in Medelci’s willingness to believe in Al-Assad’s capacity for reform, Al-Assad may have won a convenient ally in the Arab League. On the Libyan war, Algeria opted for the African Union approach with striking similarities to South Africa, refusing to cave to international pressure and preferring instead to offer lame platitudes of neutrality. That neutrality may be as valuable to Al-Assad as a friend with spare guns. DM