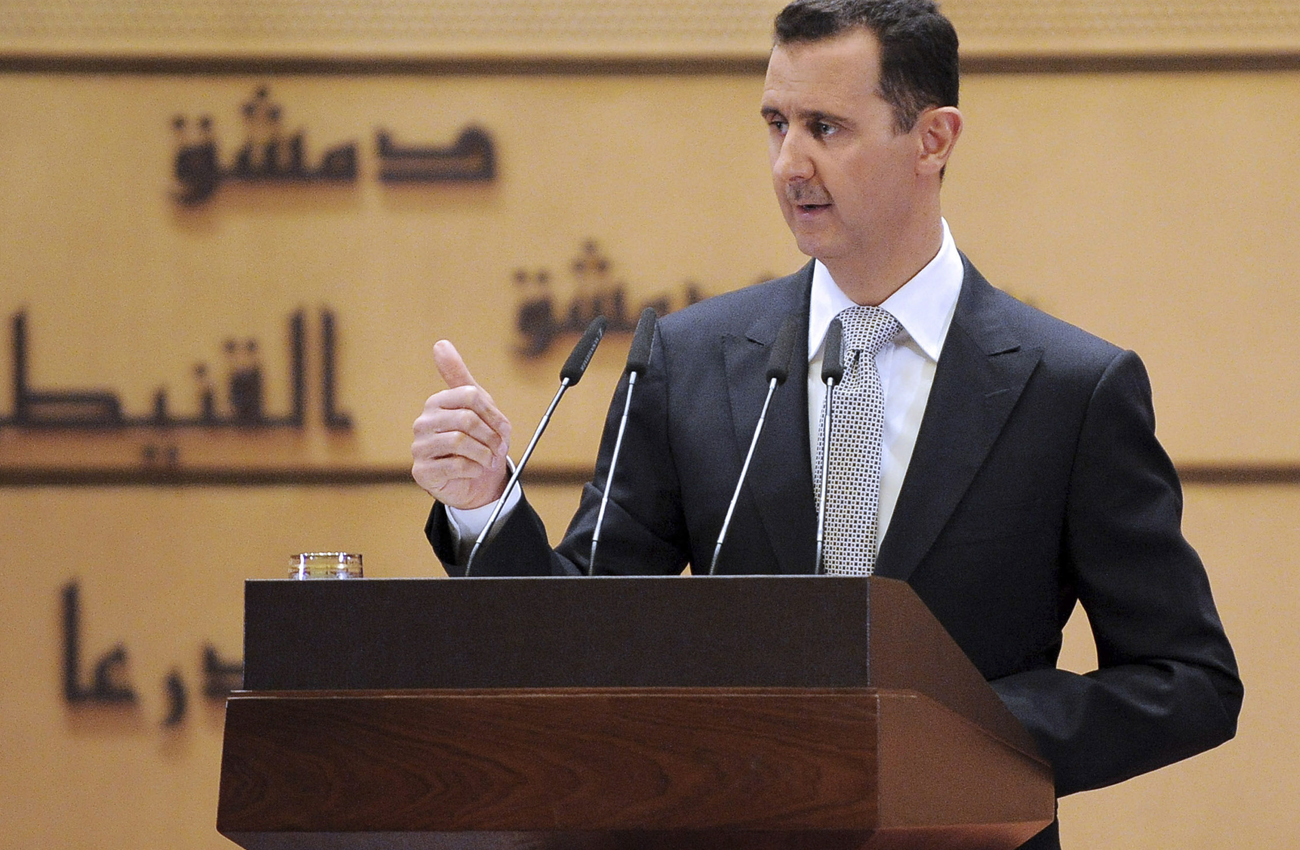 Syrian President Bashar Al-Assad spoke defiantly on Tuesday about the “internal” situation in Syria. He spoke at length about the failures of the Arab League and shrugged off Syria’s suspension from the organisation. The speech compares poorly to the theatre of Gaddafi’s oratory but, much like the Brother Leader, Al-Assad did blame protests against his government on an elaborate conspiracy. By KHADIJA PATEL.

As reports of violence continue to emerge from embattled regions of Syria, President Bashar Al-Assad told an audience at the University of Damascus the “external conspiracy is clear to everybody”. Since the uprising against his rule began 10 months ago, Al-Assad has blamed a foreign conspiracy and media fabrications for the unrest that the United Nations says has claimed more than 5,000 lives. “Regional and international sides have tried to destabilise the country,” Al-Assad said.

Labelled a “Zio-American Plot” by the state-run Sana news agency, while others opt for a “US-Zionist-Saudi” plot instead, these theories posit an alternative narrative to the Syrian uprising.

While the Syrian Observatory of Human Rights alleges government forces have opened fire on peaceful protesters killing thousands, the Syrian government contends the uprising is part of a calculated campaign aimed at overthrowing the Al-Assad government and replacing it with a regime “more compatible” with American interests in the region. “Regional and international sides have tried to destabilise the country,” Al-Assad said.

In his speech on Tuesday, Al-Assad described Syria as the vanguard of Arabism with antagonism to Israel to explain the foreign plot against his government. It is through a perspective of the conflict between the Syrian government and its dissidents through the prism of the Israeli-Palestinian conflict that has informed Al-Assad’s government’s response to the uprising.

Syria’s state-appointed Grand Mufti, Sheikh Ahmad Badr el-Din Hassoun, the most senior Muslim authority in the country, is reported to have said Syria has been targeted by Western nations because of its “independent decisions and its support for the Palestinian struggle for liberation.”

The Israeli-Palestinian prism on the conflict is however not the only facet of the purported conspiracy hatched against Al-Assad’s Baathist government.  One pro-regime Syrian official in Damascus told the Abu Dhabi based National newspaper the ongoing instability in Syria was aimed at empowering Turkey. According to this theory, the increasing unrest in the country is part of a Western conspiracy that aims to put the region under Turkish control. “The West wants to put the region under Turkish control, like in the Ottoman days,” the pro-regime figure in Damascus told The National.

Turkey has attempted to mediate between Al-Assad and dissidents but Turkish Prime Minister Recep Erdogan got tired of what he termed “lies” fed to him by Al-Assad. Turkey responded to continuing reports of violence in Syria’s restive provinces by imposing stringent economic sanctions against Damascus. On Monday Erdogan warned Syria was headed toward civil war and stressed Turkey would play a pivotal role in preventing the conflict from descending into civil war. Erdogan however stopped short of determining a military intervention in Syria. “The structure which has now emerged is heading to a religious, sectarian and a racist civil war. This has to be prevented,” Erdogan said. “Turkey has to make its priority to take a role here. Because a civil war, which can emerge here, would also put us in distress. It also poses a threat for us.”

Sectarian tensions have been highlighted during the impasse. Butheina Shaaban, the de facto spokeswoman of the Syrian state, said to a Ba’ath party conference: “The second thing that is being targeted in Syria is the beautiful coexistence in this country. As you have seen, this region is targeted to make it a sectarian, parochial, and ethnic-based region.”

As tensions between Sunni Saudi Arabia and Shia Iran continue to simmer, there is also a latent Sunni-Shiite dimension to the crisis in Syria. Al-Assad’s Ba’ath Party is dominated at its upper echelons by members of the Shiite sect of the Allawites, while the biggest protests against Al-Assad have been in cities that are predominantly Sunni. Destabilising the Syrian regime then, is seen by the Syrian government, at least, as covert warfare against the Iranians.

Syria’s foreign minister Walid Al-Moallem is reported by the state news agency to have described Syria’s relations with Iran as “deep-rooted and not at the expense of relations with any Arab countries, particularly gulf countries.”

“If they wish to continue what was achieved during 10 years, then we’re ready, and if they wish to stop or conspire, then we are ready,” Al-Moallem said.

A protracted challenge to Al-Assad’s rule certainly does have significant regional implications. Iranian leaders have echoed Al-Assad’s allegations of a conspiracy, calling the uprising “a mischievous act of Westerners, particularly Americans and Zionists.”

Such is the tenacity with which this conspiracy is explained that an American think-tank publication, “Paths to Persia” from the Brookings Institute has been latched on as evidence of the American/Israeli/Saudi conspiracy. The paper was meant to propose novel methods in US engagement with Iran, but proponents of the conspiracy believe that the paper is equally relevant to the current situation in Syria. Aisling Byrne from the Conflict Forum in Beirut, Lebanon, believes the paper is “essentially a step-by-step guide detailing options for instigating and supporting a popular uprising, inspiring an insurgency and/or instigating a coup.” And in fairness, the Brookings paper is particularly damning. “An insurgency is often easier to instigate and support from abroad … Insurgencies are famously cheap to support … covert support to an insurgency would provide the United States with ‘plausibility deniability’ … [with less] diplomatic and political backlash … than if the United States were to mount a direct military action … Once the regime suffers some major setback [this] provides an opportunity to act,” it states.

The Syrian government believes that the US has grown weary of military intervention in the style of Iraq and Afghanistan and now favours to wage proxy wars in the vein of Libya. The Syrian regime fervently believes that opposition groups are receiving financial and military aid to the tune of millions of dollars – not from the US – but the Americans’ principal allies in the Gulf: Saudi Arabia and Qatar.  For their part, the Syrian opposition are derisive of Al-Assad’s claims.

In the absence of independent media in Syria, neither Al-Assad’s claims of an armed insurrection nor the daily reports of casualties from the Syrian Observatory for Human Rights have been independently verified. Key to Al-Assad’s claims of a conspiracy is media collusion against the Syrian regime. “We have more than 60 televisions stations working against Syria,” he said.

And while Al-Jazeera has been apportioned the greatest share of the blame in the grand smear campaign against Bashar Al-Assad, one commentator As’ad Abu Khalil has accused Arabic news stations Al-Jazeera and Al-Arabiya of adopting a bias in favour of the Syrian opposition. “Demonstrations are declared a success even before they take place. Thus, Al-Jazeera and Al-Arabiya declare a demonstration massive the day before it starts. Not once, have the media stated that a particular demonstration was not massive, or that protests this week were less intense than last week, when protests – naturally – go through ups and downs,” he says.

Khalil is however similarly scathing of Western media coverage of the Syrian uprising. “Western media insisted that all claims about armed elements of the opposition were mere fabrications by the regime. Yet, when an opposition “army” was announced, and when news of armed clashes in Homs and other places appeared, there were no explanations in the Western press. There was no attempt to reconcile the claims and the later reportage,” he says.

The strategic importance of Syria to the broader region has seen a variety of actors, like Saudi Arabia and indeed Turkey and Qatar, react strongly to the uprising.  There is little doubt that political powers are jostling behind the scenes in various attempts at influencing the outcome of the current impasse. Are these reactions to events within Syria part of a greater plan to wrest control of the region from anti-Western sentiment?

His speech on Tuesday was branded a reflection on local events but it translated instead into an opportunity for Al-Assad to lament foreign influence in local events. The “external conspiracy is clear to everybody”, he said.

Al-Assad has then pinned his survival on deflecting local problems to foreign enemies. DM