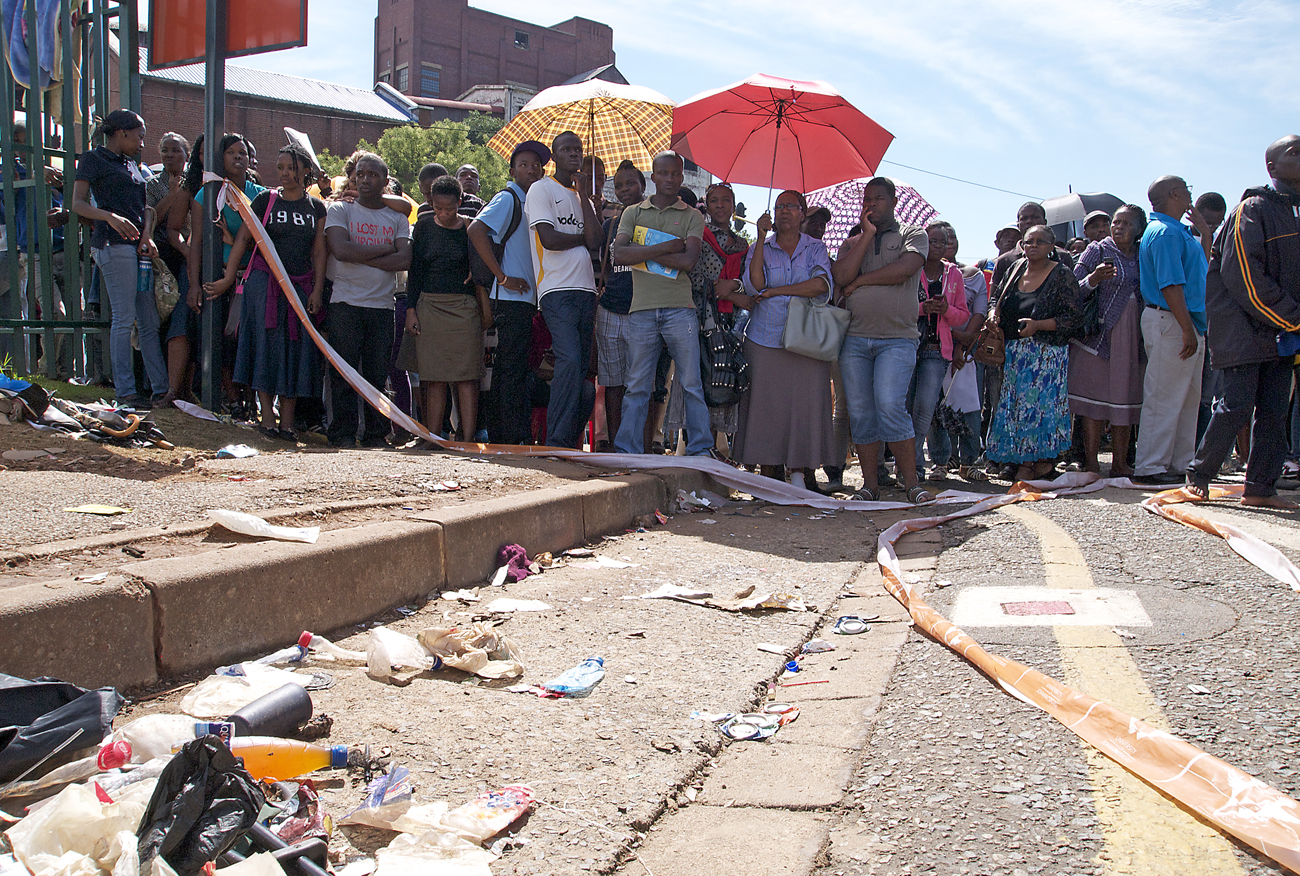 The mother of a prospective student died in a stampede at the University of Johannesburg on Tuesday in which 20 others were injured. The tragedy should have been averted and no one wants to take the blame. Just as they didn’t want to see the trouble coming. By GREG NICOLSON.

It was not too hard to figure out there would be a lot of tense people at UJ on Tuesday. South Africa’s university system has room for 150,000 first-year students. One-hundred-and-eighty-thousand matriculants whose results qualify them for further study won’t get a place. The University of Johannesburg received 85,000 applications for 2012 but can only take 11,000 students. When prospective students arrived at the Bunting Road campus for late registration on Monday, many of those places were already filled through conditional and unconditional offers. When they returned on Tuesday there were still 6,000 people desperate to get inside and have their applications processed.

But the university failed to control the crowd or tell them they could enter at a trickle until all were processed. Inside the gates there was significant security presence and fences had been erected to direct prospective students to the registration tent. Johannesburg Metro cops were positioned outside the campus to direct the flow of traffic. But there was no collaboration and no one marshalling the queue.

At around 7:30 students threw blankets onto the palisade fence so they could climb over while the crowd pressed at the gate in anticipation. They were jammed among thousands of bodies and thought they would be crushed until the gates were opened, they later said. With the situation out of control, the gates were opened and the crowd stampeded through. “No one stopped the madness until someone was hurt,” said one parent, referring to the Metro cops who continued to direct traffic. “That’s the law in South Africa: someone has to get hurt before anyone will do anything.” Another parent was trampled in the rush and died while her son was inside the university waiting to be processed.

Both the University of Johannesburg and the police denied responsibility. The university said that because it happened outside the campus, where thousands were forced to wait, it’s not their fault. The police say they were there to direct traffic. Vice chancellor Ihron Rensburg said the contingency plans failed because the university was not observing the situation. JMPD spokesman Wayne Minnaar said, “Some police were managing traffic, not controlling crowds.” After a turnout of 30,000 for late registration last year, the university tried to avoid any incidents by letting in more applicants at a time. But the slight change wasn’t enough. The university’s student representative council condemned the lack of planning. It asked why applications for all campuses were processed at Bunting Road and said there were insufficient staff and resources to ensure the registrations ran smoothly. The SRC’s offer to help marshal the crowd fell on deaf ears. It also recommended the university try to inform applicants of the courses for which they could apply before arriving at the registration tent.

The university seemed only to take responsibility for communication on campus. Those who registered commended the institution for its handling of their applications, but outside was a different story. At 10:00 management interrupted registrations by holding a press conference in the tent rather than another of UJ’s facilities and suggested the campus would remain closed. It wasn’t until 14:00 that a flyer was handed out at the gate telling the large crowd to go home because no more applications could be taken. “That’s the first thing we’ve heard in two days,” said someone in disbelief.

It’s likely the tragedy will force the department of higher education to review both the late application process and increase its emphasis on further education and training (FET) colleges. Minister Blade Nzimande said last-minute applications were “something we are seriously considering that maybe we should not consider ‘walk-ins’. We think that the price we are paying is too much.” The alternative is a centralised admission process being tested in KwaZulu-Natal.

Both Nzimande and Rensburg explained that the high numbers of university applicants were due to negative perceptions about FET colleges. They said they hoped to educate young South Africans about the options available for tertiary education. “We can’t go and punish UJ for what is a national issue,” said the minister.

There are still 50,000 places left at FET colleges where the department is offering R1-billion rand in bursaries and scholarships to poor students. DM