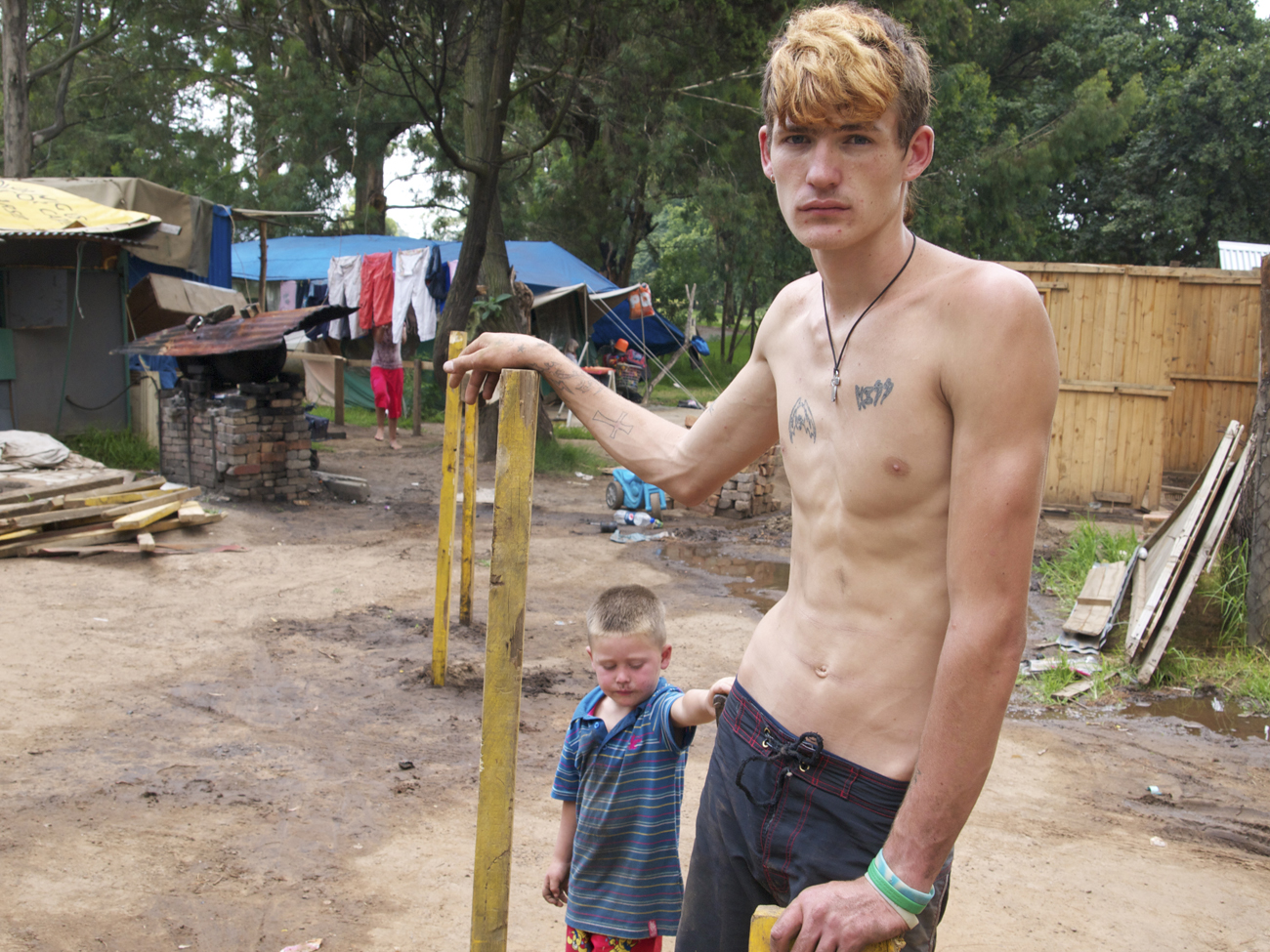 On a Sunday afternoon, Coronation Park seems like the perfect place to be. Couples picnic on the lawn under the shade of trees while families fish for carp at the dam. At a first view, the informal settlement, known for being a white squatter camp, in the northeast corner still looks like a caravan park. There’s space to park a car between the shelters and residents are relaxing on camp chairs outside their plots. But walking through, there are all the signs of poverty. The shabby shelters – tents, corrugated iron shacks, caravans and shipping containers – don’t have electricity, hot water or sanitation.

“It sucks here,” says Wayne Engelbrecht, 18, as he digs foundations for a fence around his family’s shack to keep thieves at bay. His sixth year in the settlement, he says there’s too much stealing and fighting and he wants out. It’s a common theme. Many of the residents have come from a life with at least the basic luxuries and want to return to formal housing, even if it’s an RDP house in a township where there’s been threats against white resettlement.

Jobs are scarce here, so would Engelbrecht work under Julius Malema, maybe as a gardener or in maintenance? “Never in my whole life. He likes bringing down the name of white people.” Fair enough, who wants Juju barking “you bloody agent!” every time you want a day off? But would Engelbrecht ever work for a black family? “No, I don’t work for black people. Never. It’s meant to be the other way around,” he says candidly without a care for how it might limit his future.

Sitting at the entry to the settlement, Hans Beukes, 54, and Charlotte van Nieherk agree. Both refuse to work for Malema, despite the pay, and both say they wouldn’t work under a black boss. Pressed, van Nieherk says she might while Beukes responds, “I work for myself, look after myself.” Why not a black family? “I won’t work for a black guy. I just won’t. I just won’t.”

Malema, who was speaking at Thaba Nchu in Free State on Friday, drew attention to the struggles faced by many black South Africans. He said improving the conditions of the poor, those who go hungry and live in leaky shacks, motivates his political career. “I am the child of a domestic worker,” he said to explain why domestic workers is a close issue. He denied the Youth League’s call for “economic freedom in our lifetime” was meant to exclude whites. “We never said they should be sent to sea. We just want to share the cake.” However, when he says he wants more white domestic workers, it’s hard to ignore the implied yet obvious message that whites will have to step down the ladder of wealth and privilege for “economic freedom” to happen.

As the ANC celebrates its 100-year anniversary, it seems everything needs to correlate to South Africa’s experiences of a century ago, so here goes. “Between 1890 and 1939 the most burning political issue was the existence of a large white underclass consisting mainly of Afrikaners. On the farms most of the bywoners and tenants had outlived their usefulness and now represented a rural proletariat, passively rotting away. In the cities and towns the poor lived on the periphery of white society. They were barely literate, had few skills and were often unemployed or unemployable,” says Hermann Giliomee in The Afrikaners.

In Coronation Park it seems the problem is back. Residents with work experience complain that they are either too old or too white to get a job, while many of their children have dropped out of school, leaving them uneducated and inexperienced. It’s a growing problem. According to the Institute of Security Studies, white unemployment in South Africa nearly doubled between 1995 and 2005, although it remains a fraction of black and coloured unemployment and is slightly lower than that among Indian South Africans. Between 2002 and 2006, the number of white households without access to housing doubled and according to the 2001 census, 10% of white South Africans live in poverty, said trade union Solidarity. We’ll get a better idea when the recent census figures are released.

Willem Trollip, 55, doesn’t need to know the statistics. After battling cancer, he was fired from his job for being a health risk to the company. Unable to afford rent, he sold his belongings for a pittance and moved with his wife and 16-year-old daughter to Coronation Park three months ago. Every day he looks for work but thinks he doesn’t tick the right boxes. “I’m not worried about my life,” he says, before describing the survival skills he learnt in the army. “It’s my family that’s suffering. It’s difficult. If I get a chance to get out of here…” He doesn’t finish the sentence so I ask if he’d work for the Youth League leader? “Not a problem at all. I’m doing what I can to get a couple of bucks.”

On the dirt path leading away from Trollip’s “home” sits Danie Lourens, 64. “I would work for Malema,” he says. Then he discusses the firebrand’s call for white domestic workers: “He may have a point and it’s not impossible. If you see how many white people are unemployed, it will happen. I know what happened during apartheid and it’s inevitable. It will happen.”

So despite some entrenched racial divisions, there are at least a few candidates in Coronation Park for Juju’s job openings. If the trend continues, they’ll welcome the offer. DM