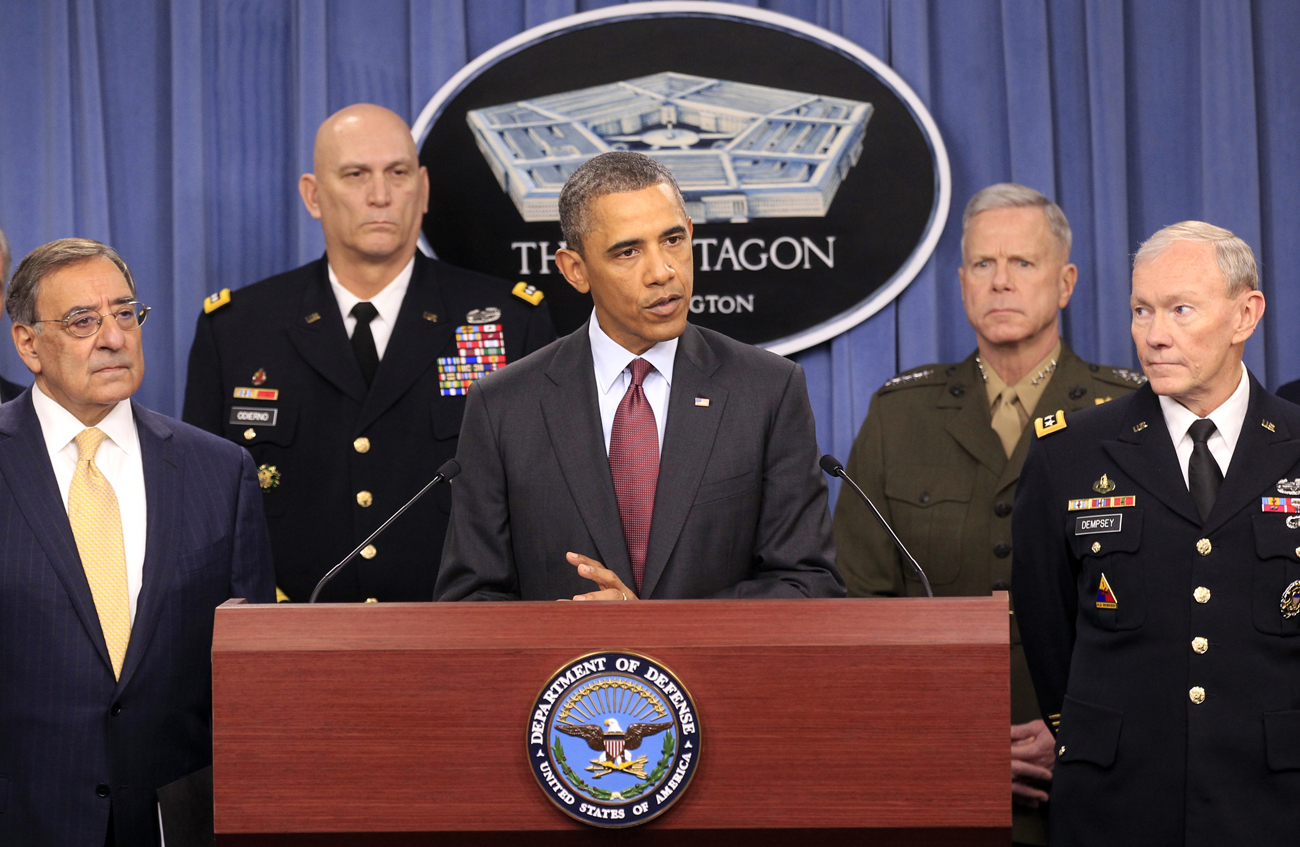 Following the continuing blood-letting on Capitol Hill over the US budget and incoming budget reductions in the years ahead – as well as the possibility on the horizon for even more draconian cuts if Congress and the president do not come to agreement on the budgetary way forward for the decade to come – the Obama administration has now announced a new defence posture and grand strategy coat-cut to fit its limited budgetary cloth. By J BROOKS SPECTOR.

In attempting to soften the blow, President Barack Obama explained the Pentagon’s basic budget would still be larger than it was during much of the Bush administration, even as it was primed to absorb cuts of around $450-billion in the years ahead – and perhaps as much as $500-billion more if that budget tangle is not resolved. Nonetheless, the nation will still have the largest military budget on the planet – and so there still should still be enough to go around to keep most defence enthusiasts happy enough. The country’s defence budget is more than the next 10 nations’ together, although a significant chunk is personnel costs for the country’s all-volunteer force.

In an unprecedented public move designed to send a message that the president has been hands-on with this plan in his role as commander-in-chief, Obama joined defence secretary Leon Panetta and the chairman of the Joint Chiefs of Staff in the Pentagon’s press briefing room on Thursday to release the bare bones of the plan. This time around, it was just an eight-page outline, but when more details will follow, that’s where vociferous congressional defence budget supporters – and a Republican presidential candidate – will certainly try to get their oar in.

Besides responding to the imperatives facing Obama’s administration in his ongoing tangle with Congress over budgets, this new defence strategy is also designed to acknowledge a weaning away from major ground forces commitments like the ones in Iraq and Afghanistan, which Obama inherited from George W Bush.

From the cold war period onward, the US military has been designed to be a force capable of fighting two “real” wars and a minor police action (and, if one is a real pessimist, one apocalyptic nuclear war to wrap things up for all time). Under the new strategic direction, however, the US is planning a military establishment that could tackle one major hot war and a lesser, less long-term holding action, although the Pentagon has been loathe to describe its capabilities in that manner, worried that opponents – both in Congress and abroad – would sense weakness. Instead, as the AP reported, Panetta says “the US will have to make some trade-offs and take some extra risks under the new military strategy laid out to absorb federal budget cuts.”

However, this new strategic concept now makes explicit that countering terrorism is one of the military’s top priorities, as it shifts focus away from major ground operations and toward naval and air operations in the Pacific. The new strategy also puts much more of a premium on working with Nato allies (such as in the Libyan experience), as well as lower-cost options like joint exercises and advisory missions.

Secretary Panetta agreed that future budgets would clearly mean smaller US armed forces and some greater risk, but this was not equivalent to choosing between national security and fiscal responsibility. Putting the very best face on it – especially since he had recently gone on record that major defence budget cuts could be an existential national security threat – he insisted this new direction was something the Pentagon would have had to do anyway in the post-Iraq world. The fact that the money wasn’t there simply made the government embrace the shift it was about to carry out anyway.

Earlier media reports had said Obama himself had insisted on keeping all of the country’s 11 aircraft carrier battle groups, rather than dropping one of these ultra-expensive task forces – instead cutting ground troop strength in the Army and Marine Corps and stretching out some of those seriously expensive new weapons system procurement projects. The recent jostling and sharp elbows in the Persian Gulf with Iran may have helped underline that decision.

A senior national security official – Washington-speak for someone like the White House National Security Advisor or one of Panetta’s top deputies – added “We’re at a key juncture with the Iraq war behind us and a transition ahead of us in Afghanistan, so it’s a natural time to look at what national security challenges we expect to face in the future and how we’ll tackle them…” This new design “…will shape a more agile, adaptable, leaner, and technologically-capable force that remains the finest military in the world – even at a time when the nation has to tighten its fiscal belt.” And in a letter issued with the new document, Obama added, “We must put our fiscal house in order here at home and renew our long-term economic strength.”

Meanwhile, the Politico blog put this course adjustment in its election year political context – and remember, just about everything in 2012 needs to be seen in the context of the upcoming election. Politico argues that because this is a selective deep trim, rather than an across the board buzz cut, that it builds on a previously announced bulking up in the Asian-Pacific region as a counterbalance to the growing Chinese military presence, and that actual military commanders (and not just those nefarious green eyeshade wearing, sharp-penciled, number crunching budget office warriors) were involved in the planning means it will be that much harder for Republican hopefuls to pick it apart with the knowing connivance of military insiders.

But they will try, of course, probably pointing to these budget cuts – which they helped bring into being, of course – as proof Obama is soft on Iran, North Korea and everybody in between. Analysts note, however, that the Obama administration seems to have inoculated itself, so far, against a charge of being flaccid on national security, what with the demise of Osama bin Laden and the presumably successful drawdown in Iraq, and even the hints and murmurs of a settlement for Afghanistan. In a pre-emptive response to such charges, Obama said at his Pentagon press appearance that the United States would “avoid repeating the mistakes of the past when our military was left ill-prepared for the future” – a not so subtle dig at the Republicans.

More dangerous for the administration, however, is the likelihood defence contractors – such as Boeing with its tremendous facility in Wichita, Kansas – are poised to shutter some of their plants and lay off workers just as the country enters the final months of the presidential campaign. It would be an irony, indeed, if the most immediate, direct result of this new strategy meant the Obama administration would face the charge of shedding jobs in an economy that is still struggling to recover – just as the country goes to vote on whether he gets four more years in the White House. DM Photo: U.S. President Barack Obama speaks about the Defense Strategic Review at the Pentagon in Washington January 5, 2012. Obama unveiled a defense strategy on Thursday that calls for greater U.S. military presence in Asia and envisions cutting troops in Europe as the Pentagon seeks to reduce spending by nearly half a trillion dollars after a decade of war. From left to right are Secretary of Defense Leon Panetta, Chief of Staff of the Army Gen. Ray Odierno, Obama, Commandant of the Marine Corps Gen. James Amos and Chairman of the Joint Chiefs of Staff Martin Dempsey. REUTERS/Kevin Lamarque