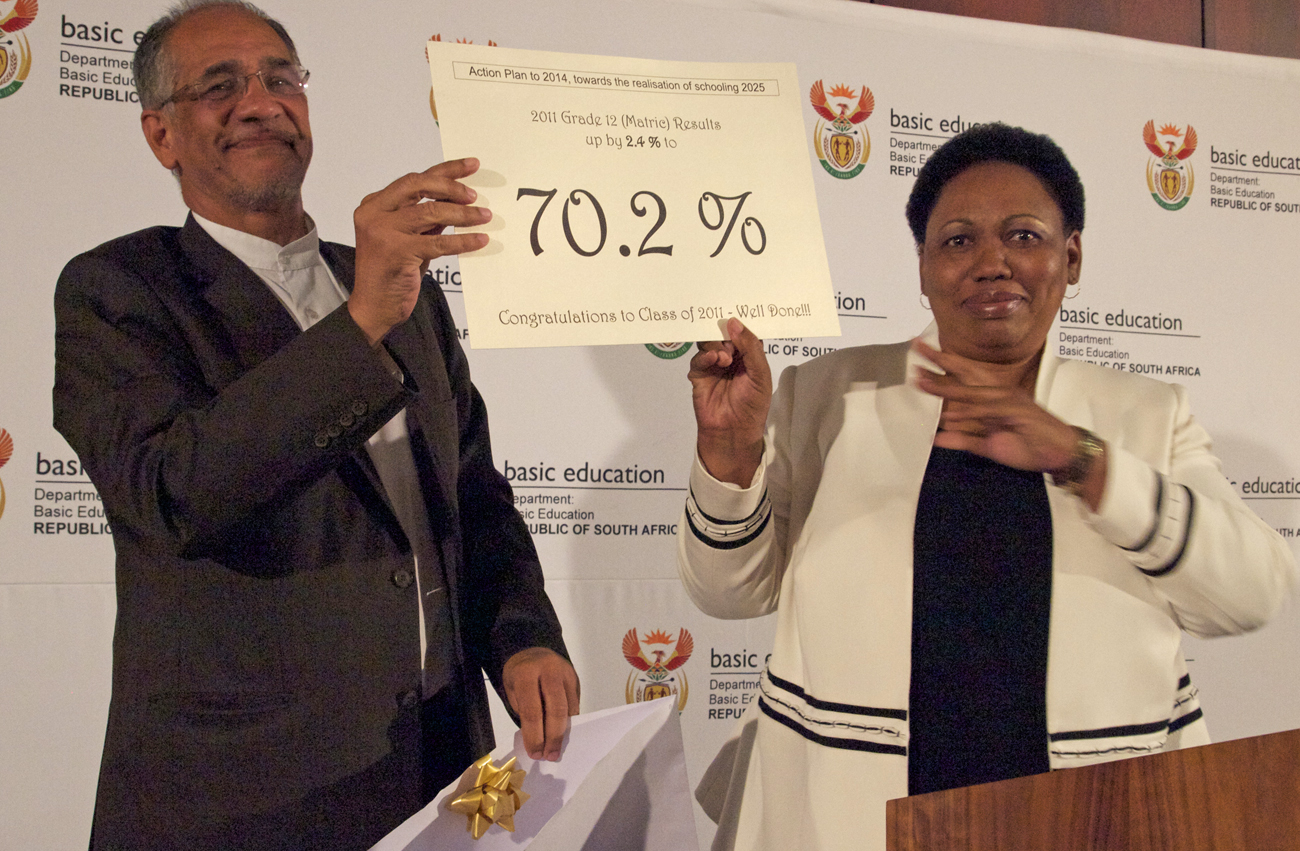 Basic education minister Angie Motshekga announced on Wednesday that 70.2% of South Africa’s matriculants had passed the 2011 exams. It was received as a step in the right direction, but it won’t save our beleaguered education system. By GREG NICOLSON.

The pass rate was a 2.4% improvement over the 2010 result and showed a steady increase since the introduction of the national senior certificate in 2008. Of the 496,090 students who wrote their exams, 348,117 passed. As expected, students from Western Cape achieved the top results with a pass rate of 82.9%, followed by Gauteng. Limpopo, Mpumalanga and Eastern Cape, which achieved a dismal 58.1%, were the worst performers. On Tuesday the Independent Examination Board announced that 98.3% of students passed its exams for private schools, a 1% improvement since 2009.

A massive 40,000 fewer full-time students sat their exams in 2011 compared with the previous year but department of education director general Bobby Soobrayen said there was no sign of gatekeeping.

In 2010 there was a surprise 7.2% increase over the previous year’s result despite a month-long break for the Fifa World Cup and a nationwide teachers’ strike. Motshekga hailed the 2011 results as a turning point for education and credited them to the hard work of the previous few years. She said teachers were coming to terms with the new curriculum and the “examination results confirm the maturity and stability of the education system”.

On Wednesday night, President Jacob Zuma was one of the first to congratulate the class of 2011. “[He] has hailed the ascending pass rate as a step in the right direction,” said his spokesman Mac Maharaj. But that’s merely an acknowledgment of what we all know: the South African schooling system is in crisis. Motshekga herself said it back in 2009. “Management in our schools is often weak and lacks leadership and commitment. Our systems are also often inefficient.” That’s why the improved results for a second consecutive year are such a win for Motshekga. While she’s been able to plug a few holes in the leaky education system, the problems are so diverse worries of it sinking linger.

A happy Motshekga attributed the success to supporting quality leadership in schools. But the figures aren’t all rosy. To pass, students had to achieve 40% in their home language, 40% in two other subjects and 30% in three subjects. The overall pass rate says little about the quality of education. A better indicator is that 24.3% of students qualified to study a Bachelor’s degree, a 1% increase on 2010 and a 4% improvement since 2008. However, the  28.5% who qualified to study a diploma represent a drop of almost 9% since 2008. But for the students who reach university, at least a third are likely to drop out in their first year and after five years just one in three will have a degree.

Improving quality has been one of department of basic education’s key focuses and it has prioritised a number of subjects. Almost 6% more students passed physical sciences in 2011, but accounting dropped 1%. One of the most worrying results was the 1% drop in students that passed mathematics. The pass rate for the subject has hovered around 45% since the introduction of the revised curriculum in 2008. “We remain concerned about the number of passes in mathematics, 104,033 in 2011, which is less than the 124,749 of 2010. The pass rate for mathematics was 46.3% in 2011, a decline from 47.4% in 2010,” said Motshekga.

She acknowledged the challenges facing the education sector. In a press conference after the announcement she stated the department would be more aggressive in pushing curriculum in 2012 and that good school leaders need to be supported. She also said she’d be more decisive in administering education in districts where state government has intervened.

For the results to lead to widespread institutional change, Motshekga will need to use the newly published information to implement her department’s 2014 and 2025 plans. With the national senior certificate and now the annual national assessment, the department has a trove of information on student performance. The question is, can it use this information and improve the quality of education delivered while reducing the current inequality in learning?
Last year we saw the national department take over the administration of basic education in Eastern Cape. But as yet there’s little sign of the political will to confront the enormous challenge of delivering quality basic education to every scholar in the country. DM