Obama: America’s Iraq War is OVER 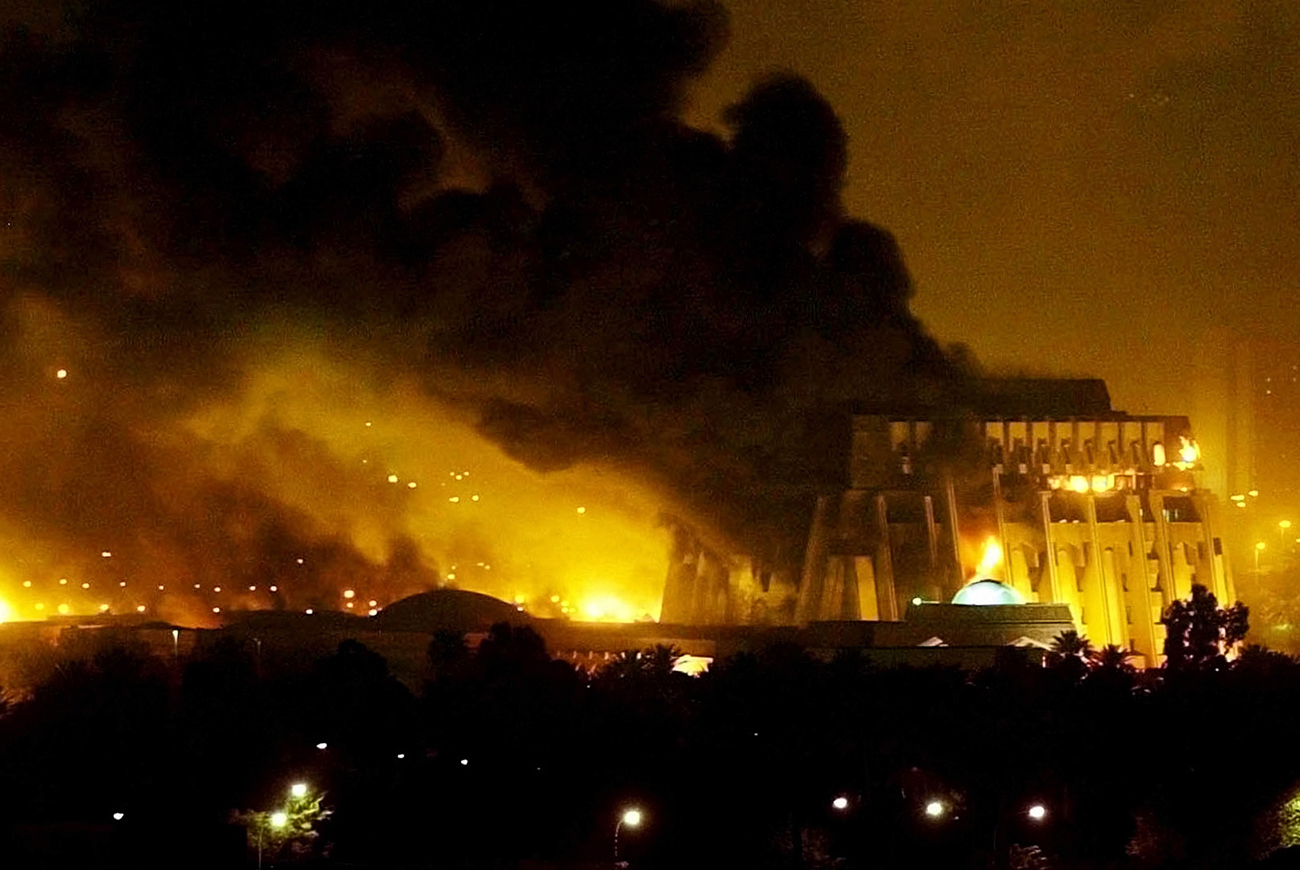 It was not quite the accomplishment of the prophet Isaiah’s iconic injunction that “they shall beat their swords into plowshares, and their spears into pruning hooks; nation shall not lift up sword against nation, neither shall they learn war any more”. There are still US forces in Afghanistan, Iraq is not like Iowa – or New Hampshire. But, regardless, speaking to newly returning troops at Ft. Bragg, and to Americans and the rest of the world via live television on Wednesday, Barack Obama announced the American war in Iraq is over – finish and klaar. By J BROOKS SPECTOR.

While personnel stationed in Iraq still number around 16,000 – the last US soldier there will be home for Christmas. And for the first time in nearly a decade, no American uniformed service members will be gearing up for their new deployment in Iraq. Active US frontline military activities actually ended a year earlier – the remaining forces were then designated for a variety of support efforts that included logistics, training and advisory roles.

The cost of this mission has yet to be fully calculated, although some economists say the final tally will reach some three trillion dollars when all the bills are counted in the years ahead. Then there are the more than 4,400 American lives (as well as those of British forces and other cooperating nations), and many, many thousands more Iraqis – uniformed soldiers, insurgents, irregulars and the civilians who always get caught in the crossfire of “friendly fire”. And of those many dollars expended, no one will ever be able to say precisely what didn’t get fixed or built as a consequence of this waste of treasure. Or how much better the nation’s finances would have been had this war never been fought in the first place. And what, ultimately, was accomplished by all this blood, sweat, toil and tears? On the plus side, an unpleasant authoritarian ruler with a real mean streak, and his sons and sycophants who were much worse, no longer lord it over millions of hapless Iraqis. Real elections do happen there now. It is even possible a partially made-up nation from parts of the old Ottoman Empire that has deep divisions between Shiite and Sunni communities, Arab and Kurd, may yet evolve into a relatively stable, increasingly democratic state that is itself a positive influence on the nations around it. It’s possible.

In all of this, of course, Iraq has now endured half a generation of terror explosions in government buildings, bus stations, mosques, schools, churches and markets; improvised explosive devices throughout the country’s roads; and yet other forms of sectarian violence.

This war has been with us so long, it may take a moment to think back to its beginnings. Back in the first Bush administration, at the peak of an American triumphalism atop the new world order following the collapse of Soviet-style communism, Saddam Hussein’s invasion of neighbouring Kuwait in 1991 triggered a 45-nation coalition to turf it out of that small but very rich nation. Under the command of General Norman Schwarzkopf and guided by General Colin Powell back in Washington, a force of nearly half a million men drove the Iraqis completely out of the theatre of operations in Kuwait, and forced their pell-mell stampede back towards Baghdad. But this massive force was not deployed to conquer the capital or settle things once and for all with Saddam Hussein. And so, fast forward to the George W Bush’s administration that came into office in 2001. U.S. President George W. Bush delivers a speech to crew aboard the aircraft carrier USS Abraham Lincoln as the carrier steamed toward San Diego in this May 1, 2003 file photograph. REUTERS/Larry Downing/Files

After a decade of sometimes unsatisfying UN no-fly zones over Iraq, those difficult to enforce oil embargoes and related sanctions; on flimsy or thoroughly constructed evidence, this new Bush administration announced to the world that Iraq had spent the past decade constructing its shadowy, but much-feared weapons of mass destruction – chemical, biological and perhaps nuclear ones as well. Colin Powell, now secretary of state, went before the UN General Assembly to make the case that Iraq had contravened the understandings that followed after the original Gulf War, and was now poised to launch a still more lethal round two. Oh, and of course the international climate had irrevocably changed after Al Qaeda’s 9/11 attacks on the New York World Trade Centre and the Pentagon.

Egged on by administration hardliners like vice president Dick Cheney and defence secretary Donald Rumsfeld, Bush determined it was the right time to rid the world of that ever-troublesome dictator. The psychoanalysis can be left to others but whatever Bush’s internal reasoning; it became a fatal miscalculation and an act of extraordinary hubris. Given the intensely patriotic climate in the US as American forces began their forays into Afghanistan in search of Taliban and Al Qaeda forces (and most especially Osama bin Laden) in the wake of the 9/11 attacks, the Bush administration chose that moment to bring down Saddam Hussein’s regime for its second simultaneous war in Asia. Those supposed WMDs, the regime’s supposed support for international terror groups, a need to finish what had begun a decade before, the bolstering of both Israel and the weaker Arab regimes in the region allied with the US, and a desire to impose American-designed stability on the region and secure the world’s unfettered access to the region’s natural resources all came together in a sprawling, untidy rationale for the new invasion that brought US forces crashing into Baghdad. Former Iraqi leader Saddam Hussein looks on during the third day of his trial, for genocide against Kurds in the 1980s, in Baghdad August 23, 2006. REUTERS/Daniel Berehulak/Pool

The immediate result of the end of Saddam’s regime was an outbreak of chaos, looting and violence across the country as the American proconsul rule virtually collapsed under the weigh of the problems. This growing instability then morphed into much grimmer warfare between the different political and religious factions and parts of the different regions of the country, as well as between Iraqis and Americans.

Despite that ill-omened “Mission Accomplished” banner draped across the island of a US aircraft carrier in praise of the president, the mission dragged on through the rest of the Bush presidency and then through three years of Barack Obama’s administration for good measure. It skewed the Bush presidency into becoming a war presidency in which everything was measured against Iraq, even as it drained the nation’s finances, eviscerated the international support for the US that had come about in the wake of 9/11, and poisoned even further the American national political discourse. While Americans were fighting the Iraq War – or fighting about it – the Bush administration decided to fight that war without taking the hard economic decisions or raising the taxes needed to pay for it – borrowing for the war, mostly from abroad. This, in turn, gave a jump to the country’s global competitors – most especially China.

In the end, the national frustration with Bush’s Iraq War helped impel the junior senator from Illinois, Barack Obama, into the White House in 2008. Ironically, what had begun as an end the war, bring the troops home presidential campaign, by virtue of the financial crisis that erupted at the end of the Bush administration, transformed the 2008 presidential campaign and the Obama presidency into one that focused almost entirely on the rescue of the country’s economy. Fighting – and then ending – the Iraq war became a dreadful irritant to officials facing even more urgent battles at home. Riding popular agreement – even among the military – that it is high time American forces leave Iraq, Obama may well be able to argue in 2012 that he has ended the Bush administration’s great mistake – if anybody stops thinking about the economy long enough to consider foreign policy issues.

Ultimately, the Obama administration hammered out a plan to wind down the Iraq war – before the next presidential election – and add a troop surge and then a gradual withdrawal plan for US and allied commitments in Afghanistan, although that will probably be tangled with the difficulties in neighbouring Pakistan as well. As the end of the US troop commitment in Iraq drew nearer, the Obama administration seemed to shrug its collective shoulders and agreed to a departure from Iraq without a full-fledged “status of forces” agreement that would have provided the legal basis for residual deployments of troops in that troubled nation. Earlier in the week, Iraqi Prime Minister Nouri al-Maliki had visited Washington to meet with Obama so they could put their hands together to note the end of the US’ time in Iraq.

And, now, with Obama’s pre-Christmas, pre-election and pre-Republican primaries speech at Ft. Bragg, in which he said, “as your commander in chief and on behalf of a grateful nation, I’m proud to finally say these two words – welcome home, welcome home, welcome home,” he has sealed the end of the adventure. The ruthless, grinding evaluation of America’s 21st century Mesopotamian campaign will take place in earnest by the legions of military historians, political analysts, strategic theorists, novelists and filmmakers – all of whom will pick over the bones of one of the great strategic misadventures of the contemporary world. DM