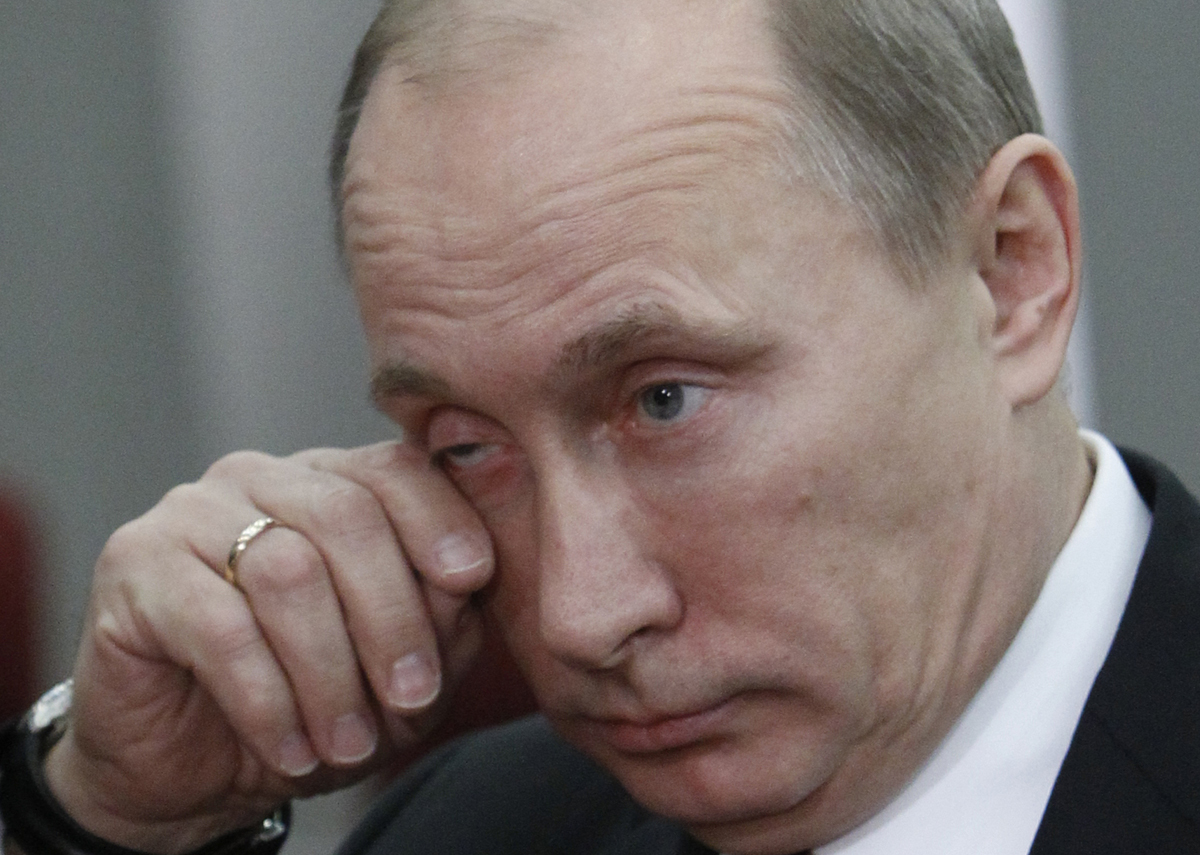 A few short weeks ago, it was generally assumed that the Russian electorate far prefers a strong and decisive leader to a democrat who plays by the rules. But the protests on the streets of Moscow on the weekend, and the jeering he faced at an ultimate-fighting contest in November, suggest that Vladimir Putin is not going to escape 2011 unharmed. By KEVIN BLOOM.

In August 2007, the Presidential Press and Information Office of the Russian Federation released a photograph of the country’s then head of state that was, in a word, unique. Vladimir Putin, the son of a factory worker and the grandson of Josef Stalin’s cook, was pictured in a river holding a fishing rod, his jaw clenched and eyes protected by mirrored sunglasses, his torso revealed in all its bulky and defined glory. The centre-point of the shot was clearly the president’s bare pectorals and biceps – this, the Kremlin knew, was the image of strength the Russian people wanted to see. Moreover, it was a strength the publicity people could be more than confident of portraying: just two months earlier, in June 2007, a public opinion survey conducted by the Levada Centre placed Putin’s approval rating at 81%, the highest of any leader in the world.

As Time magazine noted when it named him its 2007 Person of the Year: “Putin is not a boy scout. He is not a democrat in any way that the West would define it. He is not a paragon of free speech. He stands, above all, for stability – stability before freedom, stability before choice, stability in a country that has hardly seen it for a hundred years. Whether he becomes more like the man for whom his grandfather prepared blinis – who himself was twice Time’s Person of the Year – or like Peter the Great, the historical figure he most admires; whether he proves to be a reformer or an autocrat who takes Russia back to an era of repression – this we will know only over the next decade. At significant cost to the principles and ideas that free nations prize, he has performed an extraordinary feat of leadership in imposing stability on a nation that has rarely known it and brought Russia back to the table of world power.” Russia’s President Vladimir Putin fishes in the Yenisei River in Siberia as he makes a tour together with Prince Albert II of Monaco, August 13, 2007.  REUTERS/RIA Novosti/KREMLIN

What Putin also did was create wealth for a large swathe of Russians who’d never before known such abundance. In 2006, for instance, the number of “high net worth individuals” (people whose spending power exceeded $1million) in Russia rose 15.5%, compared with an 8% increase globally. Also, over the four years from 2002 to 2006, Russia’s GDP almost trebled, from $345bn to $984bn. By 2007 the Russian economy was growing at almost 7% per year; inflation had slipped from almost 16% in 2002 to single-digit figures; and exports had trebled to about $300 billion.

Then on Saturday 10 December 2011, Moscow witnessed its largest anti-government rally since the fall of communism. The focus of the protests was Putin himself, who since 2008 had acted as the country’s prime minister, and the people who were jeering him appeared to be the very people who’d prospered the most during his tenure. What angered these upper middle class urbanites was, incredibly, the results of the recent parliamentary elections, in which Putin’s United Russia party barely scraped by with a majority. Allegations of vote rigging and election fraud were rife, and an electorate who’d never seemed wedded to the principles of democracy before were now screaming for it in the streets.

Noted the New York Times: “It is a paradox, but one that has been documented by social scientists: the residents of Moscow and other large cities tend to express greater frustration with Prime Minister Putin as his government has helped make them wealthier. One explanation is the high level of public corruption here, which threatens new personal wealth. A second is a phenomenon seen in Gen. Augusto Pinochet’s Chile, that economic growth can inadvertently undermine autocratic rule by creating an urban professional class that clamors for new political rights.”

And the events of the past weekend weren’t the first inkling Putin had got that his bid to remain in power (by assuming the presidency for a third time, while placing Medvedev in the prime minister seat) was no longer as welcomed by the populace as it once might have been. At an ultimate-fighting match in late November – a “no rules” heavyweight contest between a Russian and an American, in which the former smashed the latter to a pulp – the bloodthirsty crowd, tough Russians who were a few short months ago the core of Putin’s constituency, booed and jeered the prime minister as he took to the stage to deliver a post-fight speech. This, as David Remnick reported in the New Yorker, had never happened to the man before – not in his two four-year terms as president, not in his three-plus years as prime minister. A protester, who is wearing a mask of Russia’s Prime Minister Vladimir Putin, attends a sanctioned rally in Bolotnaya square to protest against violations at the parliamentary elections in Moscow. REUTERS/Sergei Karpukhin

But was there more to the changing sentiment than a prosperous middle class grown tired of blatant political machinations? Could these events have had something to do with the watershed year that was 2011, when fed up citizenries expressed their anger everywhere from Wall Street to Tahrir Square?  Remnick suggested that comparisons should be made with caution: “Demographically, Russia is a much older, far more fully employed society [than Egypt]; its vast and unique geography, to say nothing of the determination of the regime, makes such an uprising far more difficult to conceive. Much of the middle class is still more interested in prosperity than in law or democracy. For many Russians, the experience of the nineties under Yeltsin, with its lawlessness, economic instability, and wild privatisation, was so disorienting, so disappointing, that they forgot about the new freedoms they had gained and came to refer to the period not as demokratiya but as dermokratiya (‘shitocracy’). And yet now something really was changing; there was a distinct shift in mood.”

A shift in mood perhaps more reflective of the Occupy movement than the Arab Spring. So when Putin wins the presidential election in March, as he almost certainly will do regardless of the protests, he’ll be asking himself a question that has not once crossed his mind in over a decade – will Russian stability really be his lasting legacy? DM