While COP17 hailed ‘a success’, SA slammed as mediator 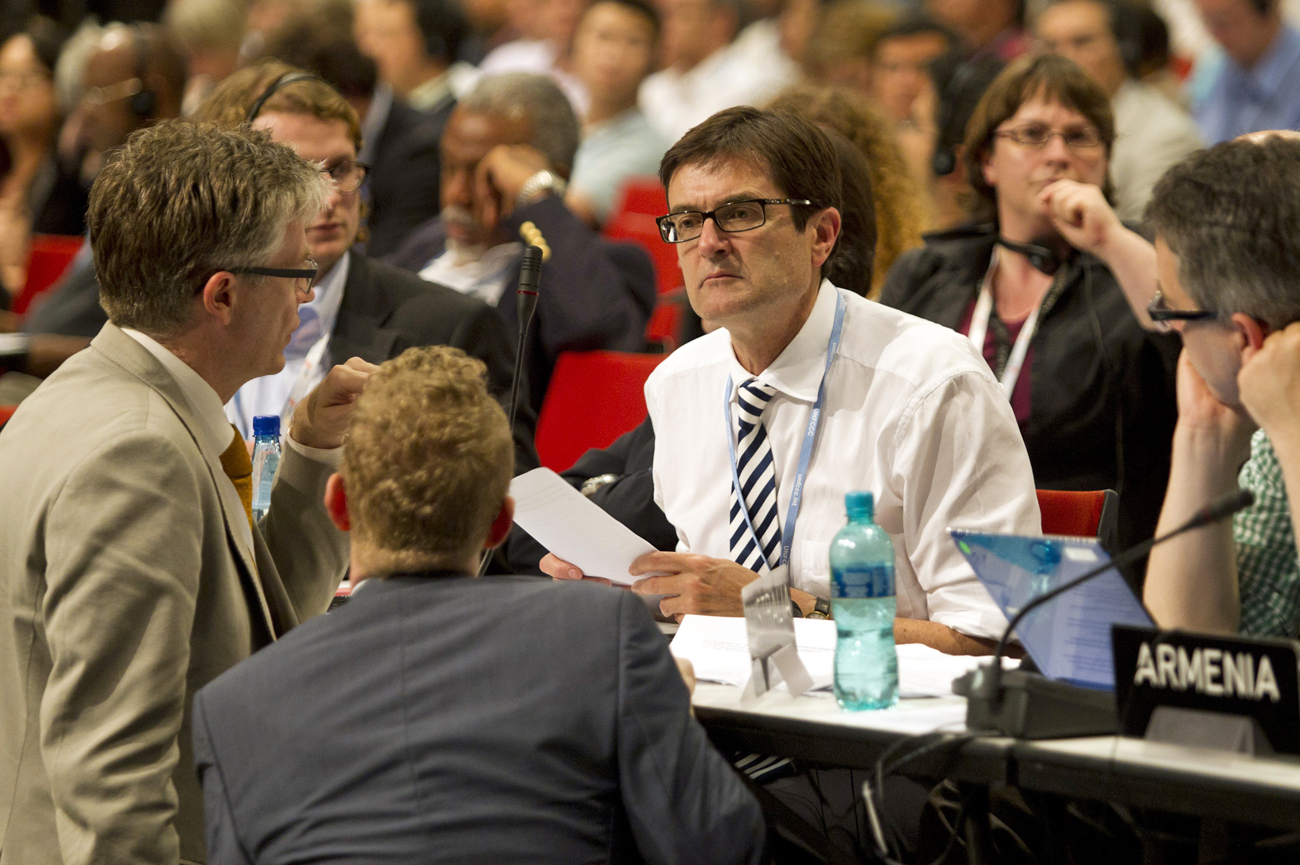 Almost 36 hours after they were originally scheduled to end, the UN’s two-week climate-change summit ended in Durban with a dawn agreement on Sunday. While the European Union has emerged COP17’s biggest winner, South Africa too has received some polite comments for “rescuing” the talks from disaster. Privately, however, delegates criticised South Africa’s unhurried mediation for forcing the talks into overtime. By KHADIJA PATEL.

After three days and nights of protracted negotiations, the UN’s climate-change summit was rescued from the brink of disaster with an agreement that commits, among others, China, India, Brazil, South Africa and the US to accept legally binding targets on greenhouse gas emissions that will come into force from 2020. With little information trickling out of the closed sessions at Durban’s International Conference Centre, the corridors abounded with rumours of holdouts and walkouts during the negotiations in the final three days.  Tempers flared during negotiations, inhibiting progress towards an agreement, South Africa recommended the annual 12-day get-together of the UN Framework Convention on Climate Change be extended by “some hours or days”.

As China, India, the Africa group and the EU battled to reach agreement in the extended hours of the summit, the chances of a new deal to prevent global warming dwindled away with the coffee supply. As parties looked to South Africa to do something to rescue the talks, even South Africa’s allies– Brazil, India and China- became fed up with South Africa’s style of mediation.  A deal had not been reached within the allotted time of the summit and negotiations in extra time appeared doomed to failure.

And South Africa’s allies were not alone in their criticism of the South African mediation. Disgruntled delegates from developed countries also decried the lack of progress made at the expense of the South African style of mediation.  After refusing an offer of help from Mexico, which boasted the success of the Cancun negotiations last year, South Africa was committed to continue shepherding the Durban talks in its own distinctive way.

Yet as late at 01:00 GMT+2 on Sunday COP president and South african minister of international relations and cooperation Maite Nkoana-Mashabane was herself uncertain of the final outcome. Imploring the parties not to abandon the talks, she said, “It is your choice what kind of history you want to make.”

The outcome of the protracted summit may well disprove criticism of South Africa’s mediation in the final, desperate days of the summit, but the punctuality of the eventual agreement will blight South Africa’s success. As delegates fretted over the ticking clock, South Africa continued to use “indabas” to force conflicting parties to listen to each other.

Trying to save what little face was left, Nkoana-Mashabane hailed South Africa’s style of mediation. “I believe the indaba laid the foundation for this conference,” she said.

UNFCCC executive secretary Christiana Figueres said last week praising the indaba process as a unique, African imprint on the climate change negotiations. “Just the fact that they are calling this an indaba has already put an African imprint on that consultation,” she said.

“It is the calling together of the elders to sit around a table when there is a divergence of opinion to listen to each other carefully in order to find collective wisdom for moving forward. That’s a beautiful description of what is going on here, and has helped countries come to the table to not only put forward their positions but listen.”

The final hours of negotiations in Durban proved extraordinary, not least for the way South Africa, and Nkoana-Mashabane in particular handled the final obstacles to a global agreement. At 03:00 on Sunday morning the EU clashed furiously with China and India over the language determining the legal form of a potential new treaty in the negotiating text. The EU plan to bind all countries to cuts was close to collapse after India inserted the words “legal outcome” into the negotiating text at the last minute.

As the EU warned the Indian addition would force them to walk away effectively collapsing the negotiations, Nkoana-Mashabane ordered China, India, the US, Britain, France, Sweden, Gambia, Brazil and Poland to meet in a small group or “huddle” to thrash out their differences.

Eventually, it was Brazil’s chief negotiator, Luis Figueres, who forced a compromise when he proposed substituting the words “an agreed outcome with legal force” for “legal outcome” in the text.

And thus the COP17 was rescued from disaster.

In the lead up to COP17, Romy Chevallier, a senior researcher for the governance of Africa’s resources programme at the South African Institute of International Affairs said the degree of inclusiveness of the Durban negotiations would ultimately determine the success of COP17. “The legitimacy of COP17 will be judged on its openness and the dialogue that the South African government conducts with all important stakeholders, in particular with civil society and business,” he wrote. Its success depends on South Africa’s ability to move the debate back to people and to dealing with environmental integrity.”

While it remains for government to effectively shift the debate into the public sphere, the success of COP17 was no small achievement. Climate change is one of the most divisive and complex areas today and a failure in Durban would have hindered the future of multilateral decision making. South Africa’s mediation efforts were aimed at securing an inclusive, transparent and multilateral process. While South Africa’s allies may have taken issue with the indaba process, the emerging economies all emphasised the need for multilateralism during the summit.

Tosi Mpanu-Mpanu, lead negotiator for the Africa group, explained multilateralism to be integral to the security of developing nations. Speaking at a press conference at the ICC last week, he said, “The multilateral process is of prime importance. It’s the only process that will cater for all our needs. Otherwise, this will be an era of cherry-picking.”

Behind the save-the-world rhetoric of global climate change negotiations lies a murkier realpolitik. The multilateral process is tedious, but in Durban, it at least lent a semblance of inclusiveness to the negotiations. DM