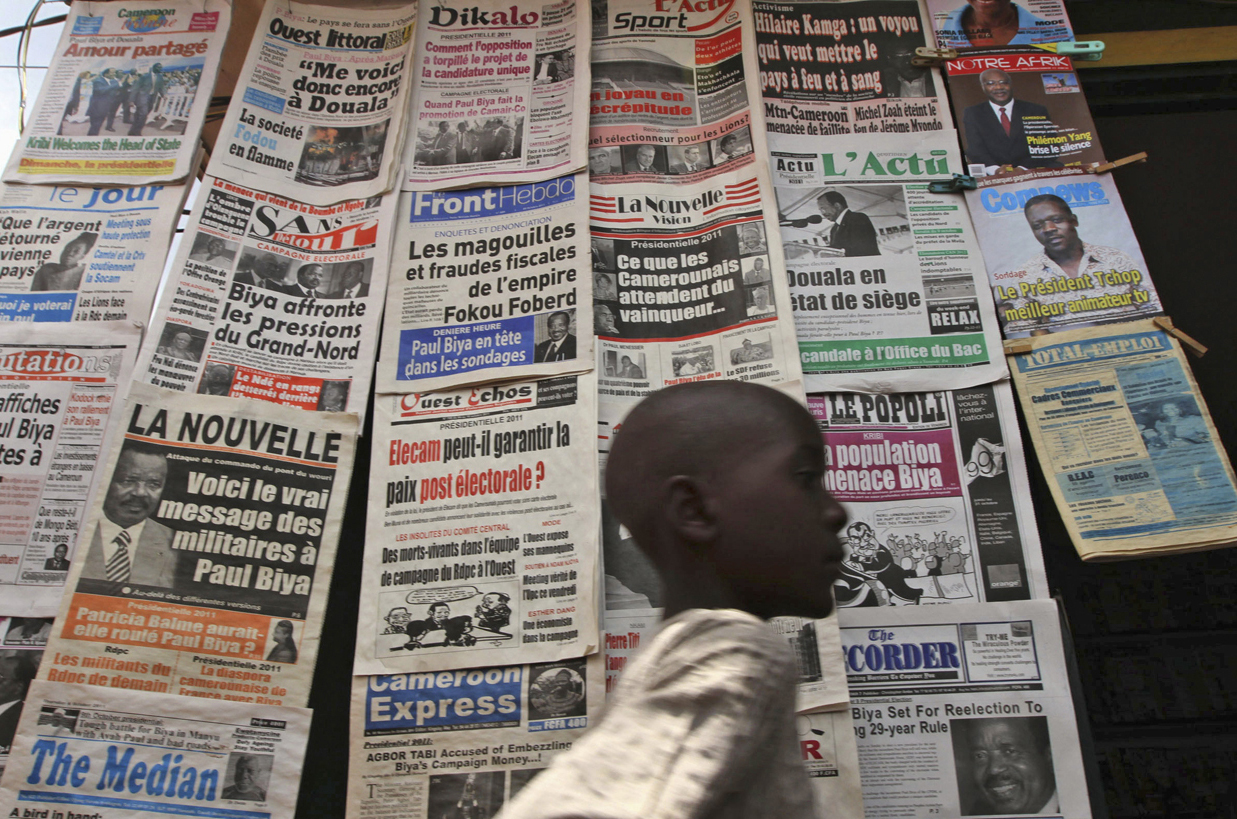 There are currently 52 journalists imprisoned in Africa, in nine countries. More than half the jailed journalists are held in that scourge of media freedom – Eritrea. The most disturbing news to come out of CPJ's recent report on journalists behind bars, is that the trend of imprisoning journalists – often on trumped-up charges – has seen a sharp increase over the last decade. And if the Protection of State Information Bill is passed next year, the 2012 CPJ report could very well see South African journalists join their colleagues across the continent in serving prison time for doing their job. By THERESA MALLINSON.

Last week the Committee to Protect journalists published its annual special report on imprisoned journalists. As you read this, there are 179 journalists in prison across the globe – 52 of them in Africa. The 179 imprisoned journalists include only those who were actually sitting in jail on 1 December – not people who were released during the year. Worldwide, 34 more journalists were imprisoned than at the time of CPJ’s 2010 report. This year’s count is the highest since 1996; in 2000 there were only 81 imprisoned journalists, but since then the number has been on the increase.  Although “only” perhaps isn’t the right word, as every one of those imprisoned in at the beginning of this decade, and all of those in jail now, are not merely statistics, but individuals whose lives – and careers – have been irrevocably altered by their time behind bars.

In Africa, by far the largest number of journalists are jailed in Eritrea, where, according to CPJ, there are currently 28 journalists in prison (the second-highest total in the world, after Iran). Said Abdelkader, Yusuf Mohamed Ali, Amanuel Asrat, Temesken Ghebreyesus, Mattewos Habteab, Dawit Habtemichael, Medhanie Haile, Seyoum Tsheya, and dual Eritrean-Swedish national Dawit Isaac have all been in prison for the last decade after President Isaias Afewerki launched a crackdown on free and independent media in September 2001. Television reporter Hamid Mohammed Said has been in jail almost as long – since 2002.

Seems like Afewerki likes to arrest journalists in batches, at times swooping down on whole newsrooms. Twelve journalists working for Radion Bana have been jailed and held incommunicado since February 2009. They are: Esmail Abd-el-Kader, Ghirmai Abraham, Issak Abraham, Mohammed Dafla, Araya Defoch, Simon Elias, Yirgalem Fesseha, Biniam Ghirmay, Mulubruhan Habtegebriel, Bereket Misguina, Mohammed Said Mohammed, and Meles Nguse. Even being part of the state media isn’t a get-out-of-jail-free card: Radio Bana was sponsored by the Eritrean ministry of education. And Habtemariam Negassi, who worked for a state-controlled television station, was jailed at the same time.

Then in early 2011, Nebiel Edris, Eyob Kessete, Tesfalidet Mebrahtu, Mohamed Osman, and Ahmed Usman – all working a state-controlled radio station – were also imprisoned. “While it is very difficult to obtain details from Eritrea, CPJ continues to gather information on the imprisoned from journalists who have recently escaped the country,” the report noted. “The government’s motivation in imprisoning journalists is unknown in most cases, but CPJ’s research has found an environment in which state media journalists are under the absolute control of Information Minister Ali Abdu.”

Right next door in Ethiopia, seven journalists are currently in jail – and there would be many more of them behind bars if so many journalists hadn’t chosen exile. According to CPJ, since 2001 at least 79 Ethiopian journalists have fled their native country.

Eritrean television journalists Saleh Idris Gama and Tesfalidet Kidane Tesfazghi have been imprisoned in Ethiopia since 2006; and this year Ethiopian nationals Woubshet Taye, Reeyot Alemu, Eskinder Nega have all been jailed, as have two Swedish journalists, Johan Persson and
Martin Schibbye. All five journalists jailed in Ethiopia this year have been charged with terrorism.

Meanwhile, four journalists in Côte d’Ivoire have been imprisoned this year: television presenter Hermann Aboa and print journalists César Etou, Didier Dépry, Boga Sivori. The latter three all work for a newspaper called Notre Voie, which has published columns critical of the government.

Four journalists are also being kept behind bars in Sudan. Abdelrahman Adam Abdelrahman, Adam al-Nur Adam, and Zakaria Yacoub Eshag were jailed in 2010. The three work for Radio Dabanga, a human-rights-focused station, which frequently highlights the situation in Darfur. Jamal Osman Hamad, an Eritrean journalist in exile, was imprisoned in Sudan in October this year, although CPJ research did not point to why.

Morocco imprisoned two journalists in 2011, Rachid Nini and Mohamed al-Dawas; as did Rwanda in 2010, when Agnès Uwimana, and Saidati Mukakibibi were jailed. In Egypt two blogger-activists are currently imprisoned: Maikel Nabil Sanad, and Alaa Abd el Fattah. Both of them have been critical of Egypt’s military rulers.

There is one journalist each jailed in Burundi, The Gambia and Libya. In Burundi, Hassan Ruvakiki was charged with terrorism this year; in The Gambia Ebrima Manneh has been imprisoned since 2006; and in Libya Hala al-Misrati has been held under house arrest by the rebels since August 2011.

So many journalists jailed on the continent doesn’t make for a lot of good news. Admittedly, with journalists currently imprisoned in nine countries, that does mean there are 46 countries in Africa without any journalists behind bars. But this doesn’t mean those countries haven’t jailed any journalists at all in 2011, simply that none were being held as of 1 December 2011.

Some common themes emerge from the sample of journalists in jail at the time of the CPJ report. With the exception of those jailed in Eritrea back in 2001, many of the journalists were imprisoned in the last couple of years. Several of them are detained without charge, and those who have been charged are often held on trumped-up terrorism accusations. Of the countries that are part of the Arab Spring, Syria in the Middle East has the most journalists in jail (eight), with Egypt imprisoning two and Libya one – although several journalists have spent time in jail there this year, including Manu Brabo, James Foley and Clare Gillis, who were released in May after being held for six weeks.

In South Africa, we are privileged that there are currently no journalists behind bars. Of course, should the Protection of State Information Bill be passed next year, this could very well change. And beyond our own borders, if media freedom is curtailed in South Africa, it will have repercussions for journalists throughout Africa. If the continent’s beacon of human rights has a law that could land journalists in prison, that makes dictators across Africa feel completely justified when they themselves throw journalists in jail. As South African journalists protest the Protection of State Information Bill in its current form, we should remember that we are fighting not just for our own right to freedom of expression and access to information, but for the rights of our colleagues across the continent. DM

Photo: A boy walks past a newspaper kiosk at the Carrefour Wada district in the capital Yaounde October 7, 2011. REUTERS/Akintunde Akinleye.