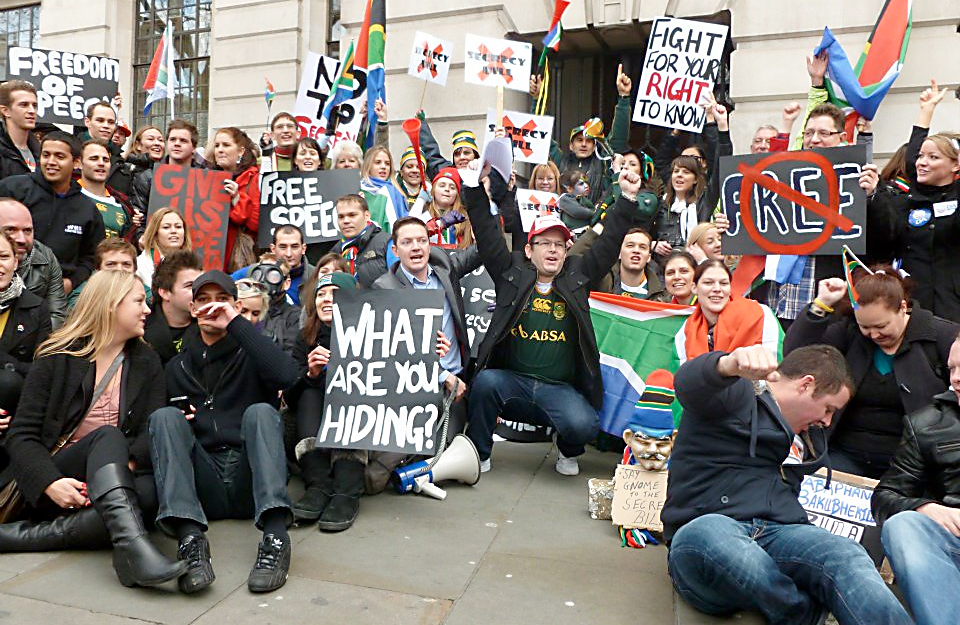 Last weekend a demonstration was held outside the South African embassy in London to protest against the Protection of State Information Bill. While the event was judged a success, the response of the ANC London branch revealed that party divisions are as alive across the ocean as they are back home. By REBECCA DAVIS.

The London protest last Saturday was a combined initiative between the popular expat blog Pharside and the DA Abroad. Around 100 people participated, with the event having “more of a party air than an angry one”, according to The South African newspaper (distributed free around London). Global chairman of the DA Abroad, Ludre Stevens, told Daily Maverick that the organisers wanted to make sure that the protest “didn’t smack of party politics, so we made sure that the advertising and feel of the event was South African first and open to everyone”.

This idea appears not to have impressed the head of the ANC London, Xolani Xala, who criticised the initiative on the wall of the Facebook event, set up to advertise it in advance. In a posting on 28 November (last Monday), Xala described the DA Abroad as “just like popcorns jumping in a pan” and “opportunists”. Interviewed by The South African after the protest on Saturday, however, Xala said “To march without giving notice to the ANC London branch is an act of cowardice and being disrespectful”. Stevens responded by saying that he had informed Xala personally about the march, and pointed to Xala’s 28 November Facebook posting as proof that ANC London was indeed aware of the event in advance.

Stevens rejected the claim that the DA Abroad had acted opportunistically in setting up the protest, telling iMaverick that “we will pursue every opportunity available to us to defend our democracy and our country”. “We hope our fellow ANC countrymen will join us,” Stevens said. “It’s not about party politics; it’s about making sure we don’t return to a secretive government.”

London is the headquarters of the DA Abroad, but the organisation also has regional hubs in Australia, South Korea, Netherlands and Namibia. It was set up in November 2009 in response to the results of the SA general elections of that year, which revealed a strong support base for the DA among South Africans in the diaspora. Of the roughly 12,000 votes cast from overseas – with 7,833 from London – 77% went to the DA. With estimates of up to half a million South Africans based in the UK alone, there’s a lot of incentive for parties to work with those expatriates to win some useful votes.

In 2009’s elections, the ANC was found to have much weaker support among expatriates, nabbing only 8% of the vote. According to the Mail & Guardian, discussions about the need for an ANC Abroad began in 2009 as well, but it was only in February of 2011 that the ANC London branch was formed, the first outpost of the ANC in the UK since 1994. Xala, a fiery 28-year old who had previously been heavily involved in the campaign to allow expat South Africans to vote overseas, was elected the branch’s first head. Interviewed by the M&G in March of this year, Xala stated that one of his aims was to “unite South Africans abroad”.

His angry rhetoric around the Secrecy Bill protest suggests that his mission may not be succeeding just yet. Xala did not respond to Daily Maverick’s repeated requests for comment on the issue. The DA Abroad’s Stevens denied that the relationship between the two groups was consistently hostile, however, describing their interactions as “congenial”. “We recently shared a platform with them at a very positive South African Youth Development Conference in December, and we frequently attend the same South African events here in London,” Stevens told Daily Maverick.

In fact, Stevens said, the inspiration for the idea that South African political parties can make a difference to the country from abroad came from the ANC’s activities in London during apartheid. “We learned from their example,” he says. DM