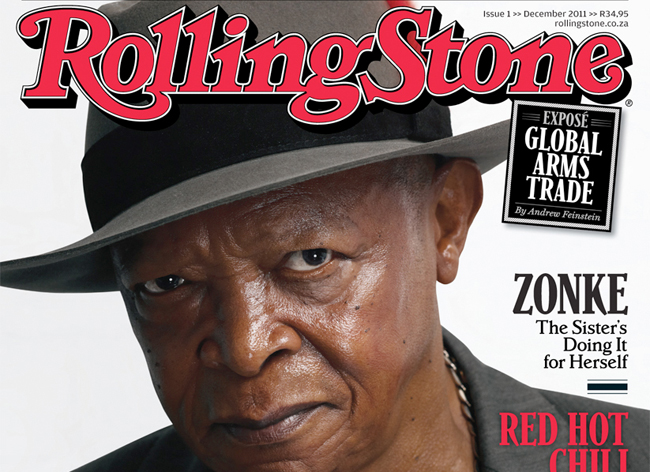 The world’s most iconic music magazine, Rolling Stone, was launched in South Africa on Wednesday. The title promises coverage of “everything from young visionaries and icons to politics, movies and more”. BY REBECCA DAVIS.

For its first edition, Rolling Stone chose jazz musician Hugh Masekela for the cover. It’s not in the least surprising, but canny nonetheless, because in terms of South African musicians, Masekela’s life is as rock ’n roll as they come. Forget squeaky-clean Freshlyground, move over, boring Parlotones. Hugh Bra epitomises the hard-living, drink-and-drugging rocker that the Rolling Stone title has become famous for chronicling.

“We chose Hugh Masekela to launch with because it’s important to stick to Rolling Stone’s iconic heritage, and in terms of South African music, you don’t get any more iconic than Masekela,” Rolling Stone’s creative director Georgia Gardner told iMaverick. “He’s seen as the elder statesman of South African music, but a lot of people don’t know his story, which is as rock ’n roll as they come.”

The cover story on Masekela, written by editor Miles Keylock (well-known for his arts journalism on the local scene), is a rollicking read, its flavour a hat-tip to the gonzo stylings of Hunter S Thompson and Lester Bangs – both of whom helped propel the US magazine to legendary status. Here’s a taste:

The South African version of Rolling Stone joins 16 other editions worldwide. It’s being produced by the local group 3i Publishing, under license.  The brains behind it all is 3i’s CEO Mohammed Khan, who approached Keylock to run the show and then took a proposal to Rolling Stone in New York. They said yes, and the result is currently at your local CNA.

The plan is to split the content 50/50 between locally-generated stories and ones from the international stable. RS also hopes that some of its local content will get picked up by the other national Rolling Stones titles – “We’d like the relationship to go both ways,” says Gardner. As with the US title, the focus won’t be restricted to music, although that is its raison d’etre: politics and lifestyle will also feature. Their first edition includes a fashion spread with Afrikaans punk rockers Van Coke Cartel. In addition, its maintaining a busy website and building a rapidly-growing presence on social media.

South Africa has seen many high-quality magazines come and go (a moment’s silence for Maverick please). In the current economic climate, isn’t it a little, well, risky to be launching a R34, 95 glossy? Gardner laughs. “If nobody took risks, nothing would get done,” she says. “And so far we’ve experienced overwhelming support from readers and, importantly, advertisers.”

What the magazine has in its favour that other now-deceased titles have not, is the is well-established and highly regarded Rolling Stone brand. The US version, founded in 1967, has proved adaptable at changing format and strategy to match the tastes of the time, and this has seen its circulation increase in recent years – no mean feat considering the current media landscape. The film Almost Famous, released in 2000, telling the semi-autobiographical story of a teenage journalist writing for the magazine, also helped secure its place in the public consciousness.

The South African franchise, in other words, has big shoes to fill, but Gardner hopes that the local title will retain an independent character. “We imagine it will be more similar to titles in comparable markets like Brazil and Chile,” she says. “There’s such a wealth of local activity to cover, we’ve been reining ourselves in.”

The magazine will cover all musical genres in South Africa while retaining a “rock attitude”. Keylock has said he considers the magazine’s potential to “start cross-pollinating cultural conversations” to be one of the most exciting possibilities for the magazine. Non gender-specific and non race-specific: technically this means that the magazine’s demographic is boundless, but it remains to be seen how successful it will be at capturing a genuinely universal audience. Good luck to them – for now, Gardner notes, “We’re having a lot of fun.” DM