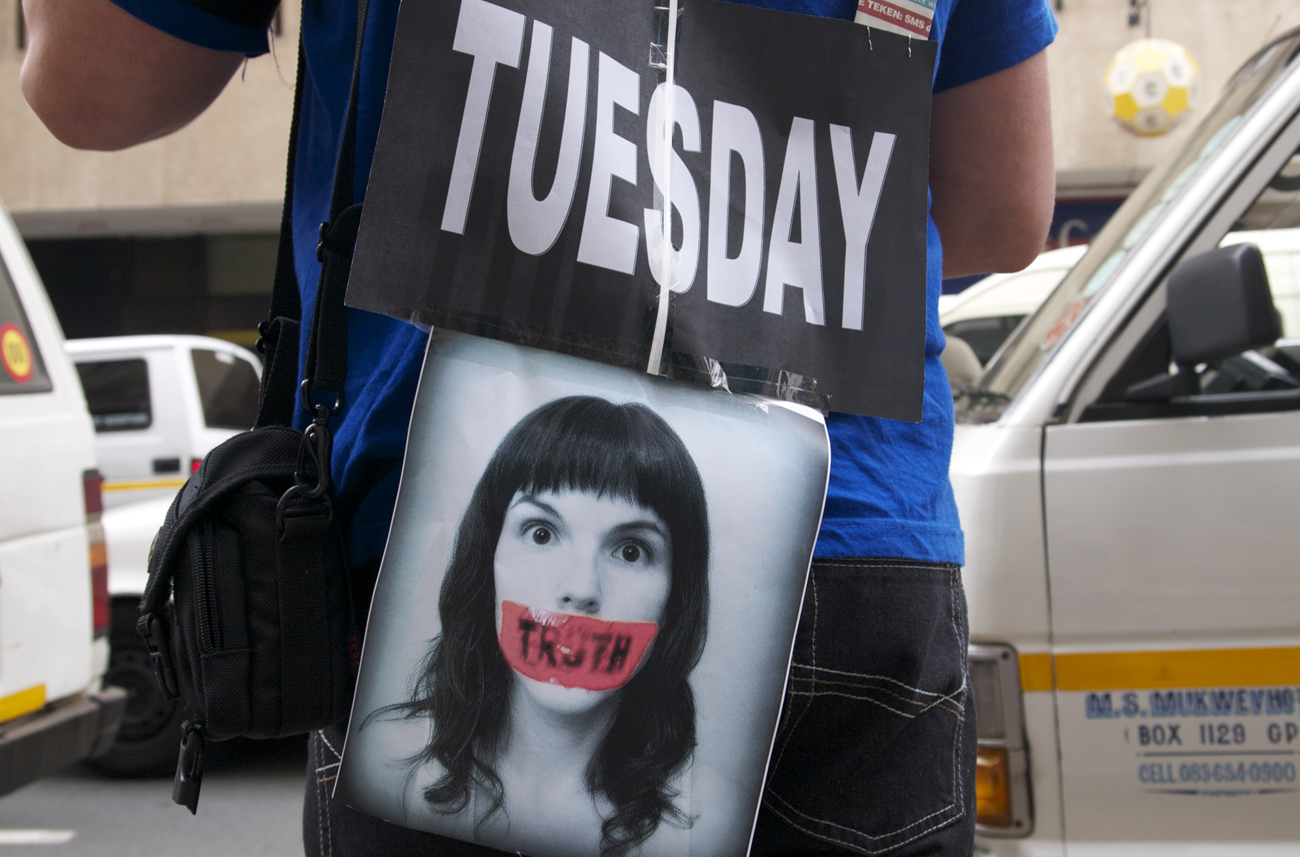 Protests against the Protection of State Information Bill took place around South Africa on Tuesday morning in the lead up to the bill being voted on in the National Assembly in Cape Town at 2pm. The Right2Know Campaign organised a series of pickets, while concerned citizens donned black clothes or armbands in reference to the National Press Club's “Black Tuesday” campaign. The bill was passed by Parliament on Tuesday afternoon, but civil society is set to continue fighting the controversial legislation. By GREG NICOLSON, THERESA MALLINSON, MANDY DE WAAL and REBECCA DAVIS.

In Johannesburg, about 100 people gathered outside the ANC’s headquarters at Luthuli House early on Tuesday. Comprising local media and civil-society groups, protesters lined both sides of Sauer Street and waved placards at the passing traffic as they called for the right to access state information.

DA Gauteng parliamentary leader Jack Bloom was among the protesters, as was Werner Teubes, the DA Youth League constituency chairman. “We’re fighting against the same laws as the ruling party fought for. We’re fighting for the same laws our parents fought for,” Teubes said. “Ninety-percent of the population fought for what we’re here for today and I honestly think each and every South African should be here today.” Teubes said he would start a seven-day hunger strike outside Luthuli House, should the bill be passed – as ensued later in the day.

Wits journalism professor Anton Harber said the bill would have an influence on how he teaches future students. “I suppose things we’ve been taking for granted, we can’t any longer,” Harber said. “We’ll have to put more energy into convincing students that they won’t have a right to do their jobs and they have to fight to protect it.” Harber, however, welcomed the challenge: “I look forward to fighting something like this.” He added that the bill would not stop investigative journalists from doing their jobs. In Orlando West, Soweto, about 20 or so protesters gathered at the Hector Pieterson Museum Square to make their voices heard. Passing motorists hooted, while protesters blew whistles and chanted “Let the truth be told”, in-between singing struggle songs. Right2Know Gauteng coordinator Raashied Galant said: “What is important here is the intention wasn’t to stage a mass protest. These people here are from organisational structures; they’re not just individuals, but representative.”

Right2Know Gauteng organiser Bongani Xezwi removed the “Let the truth be told” sticker from his mouth just long enough to talk to iMaverick. He viewed community engagement around the so-called Secrecy Bill as crucial, and said the Right2KNow Campaign would continue to engage with more community structures in Soweto, Pretoria, Thembisa and the East Rand. “This bill undermines our human rights and access to a free flow of information. That makes us voiceless,” Xezwi, said. “From today we’re having to fight this to the end.” Virginia Setshedi, the director of the Lesbian and Gay Equality Project, also attended the Soweto picket. “Our organisation sees this struggle as very important because the proposed bill threatens hard-won rights enshrined in the Constitution,” Setshedi said. “If this bill goes through, any other rights that are in the Constitution that are under threat can be easily set aside.” Setshedi also noted that LGBTI individuals don’t exist in isolation, but are part of society and part of a community that needs access to information.

Nobuhle Dube from the Soweto Electricity Crisis Committee felt strongly about fighting the secrecy bill. “Our government must tell us the truth because they have said we are living under democracy, but there is no democracy if they do like this,” Dube said. “And if we don’t fight, our kids are going to suffer.”

In Pretoria 15 or so protesters made up in vigour what they lacked in numbers, chanting slogans and waving placards outside the ANC’s Tshwane regional offices in Pretorius Street. Regional ANC officials were oblivious of the protesters but the police had obviously been informed, and there were two large SAPS riot vehicles parked outside. A smaller police car patrolled around the area as the protests took place and police personnel strolled past keeping an eye on activists. Right2Know Campaign spokeswoman, Gaahele Mokgoro, said the activists would go outside SA’s borders to seek assistance to get the bill overturned before it became law. “SA is supposed to be a shining example of democracy in Africa, but by signing this bill the government is telling the world that it is shutting down people’s right to know. We are going to be asking for help outside of the border from people to show their support,” said Mokgoro. “We want people to demand that the bill not be passed, that it should be scrapped altogether. If this bill is passed, South Africa is only one step away from becoming one party state.”

Mokgoro said it was ironic that as African countries like Kenya and Nigeria were launching open democracy projects and enacting anti-secrecy laws South Africa was doing the opposite. “The world is opening up access to information and this country should be moving toward an open and free society for all instead of closing access to information and classifying documents,” she said.

Protests were also staged in Vereeniging, Durban and, of course, the big one outside Parliament in Cape Town on Tuesday afternoon. There were about 300 people gathered outside Parliament at 1pm, in advance of the parliamentary vote taking place an hour later. It was a who’s-who of media and activist circles, with the country’s biggest newspaper editors rubbing shoulders with representatives from civil-society organisations. The crowd in general appeared well-heeled, with many clearly having popped out to protest during their lunch break. Placards ranged from pithy (“Cry the Beloved Struggle”), to more longwinded (“You have not converted a man because you have silenced him”) to slightly inaccurate (“Arab Spring – South African Autumn” – apart from anything else, isn’t it spring here). It being Cape Town, there was even a surfboard held aloft with “Stop the Secrecy Bill” painted on it.

During practically any protest outside Parliament, there comes a time when someone will climb upon the statue of Louis Botha on horseback. On this occasion, they did so to symbolically slap muzzling masking tape over the mouths of Botha and his steed, even though the two had been quite silent beforehand anyway.

Organisations like Equal Education were given the megaphone, along with the media bigwigs, in accordance with the idea that the bill would affect the average citizen as acutely as journalists. Equal Education made the point that criticism about restricting access to information could be levelled at the DA as well as the ANC. Policy head Yoliswa Dwane told the crowd that Equal Education has on occasion requested information from the provincial government and been denied it. “We are talking to our government as a whole,” she said. The South African Nationals Editors Forum’s Mondli Makhanya was equally impassioned, addressing the ANC members within the Parliament to remind them of their history. “When they press that green button they will be betraying generation after generation after generation of South Africans,” Makhanya said, invoking the spectre of apartheid figures like Adriaan Vlok and PW Botha as analogous. Some of the biggest cheers were reserved for Mail & Guardian editor Nic Dawes, who was at pains to reiterate the point that the general public would be affected as well as journalists.

The mood was defiant and upbeat, despite the knowledge that the bill was sure to be passed. A rendition of the national anthem was sung lustily. By the time the MPs inside Parliament actually voted, most protesters had dispersed.

The ruling ANC majority used its full force of numbers to bulldoze the Bill into law with 229 votes in favour, 107 against and two abstentions. This result sparked unprecedented frenzy on social media platforms such as Twitter and Facebook. Some of the most important concerns about the bill include that it legislates jail time (of up to 25 years) for whistleblowers, and does not allow for a public-interest defence.

All of South Africa’s media editors walked out of Parliament en masse when the bill was eventually voted on. South Africa’s rand almost instantly shed 13c to come to rest at R8.46 to the US dollar. The bill still has to be voted in by the National Council of Provinces, before going back to the National Assembly, and then on to President Jacob Zuma to be signed into law. If Zuma gives his assent – and there is no reason to suspect he will not do so – several organisations, including Cosatu, the South African National Editors Forum and the Right2Know Campaign, have vowed to mount a constitutional challenge against the legislation. DM