Mac against the media wall

Mac against the media wall 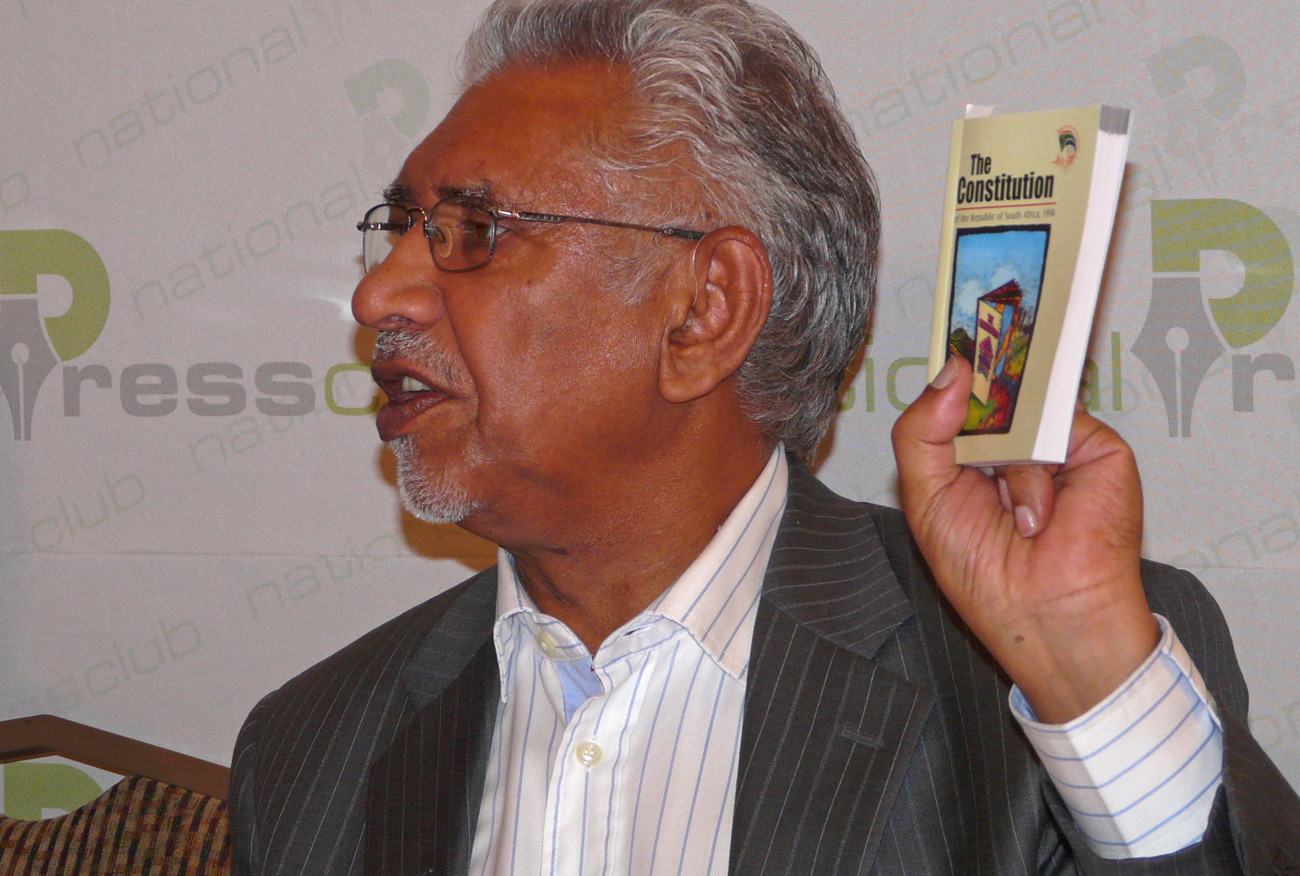 The president’s spokesman Mac Maharaj has had time to think things through following the Mail&Guardian and Sunday Times reports alleging - yet again - he accepted bribes for tenders as transport minister all those years ago. On Tuesday, he was ready with a slightly more nuanced answer. But he still refused to answer whether or not he had lied to the Scorpions. And for now, it appears that the M&G is headed for a sticky showdown in court against Maharaj. By SIPHO HLONGWANE.

What would Mac Maharaj say to the media, after it had accused him of being a liar and corrupt cabinet minister? In the morning when, 1,500km away, the SA Parliament decided it prefers to chart a dystopian future for the entire country, a fistful of journalists crowded into a small room at the Sheraton Hotel in Pretoria to find out.

How Maharaj would deal with the allegations from the M&G and the Sunday Times was always going to be fascinating. His interview with Justice Malala on Sunday morning has already passed into legend for the bad light in which he painted himself. The allegations from the media that Maharaj took bribes from a company that would later be implicated in arms deal corruption are about eight years old. This latest round of media investigations and allegations aren’t nearly as intense as the last, but this time something has given.

The M&G acknowledged it was basing its story on a recording of a full-day interrogation of Maharaj by the Scorpions, which had subpoenaed him under Section 28 of the National Prosecuting Authority Act. Disseminating a S28 hearing is barred by S41 of the act, except with the express permission of the national director of public prosecutions. Maharaj leapt on that, and threatened to charge the M&G as well as investigative reporters Sam Sole and Stefaans Brümmer for contravening S41 of the Act.

The M&G responded by blacking out the story, but Maharaj went ahead and charged them anyway.

“Media diversity and the freedom of speech and expression are vital to a vibrant democracy,” Maharaj said, as the press conference kicked off.

Pre-empting the inevitable question, he said, “I have always maintained the view that I have not been involved in corruption and bribery in the awarding of those two tenders. I want to reiterate my denial.”

He also said an investigation by the Scorpions had failed to result in him facing criminal charges.

The Sunday Times story published on 20 November claimed it found a paper trail linking Maharaj’s wife to Thales, a French company that was awarded a controversial R265 million credit card tender licence by the transport ministry under Maharaj, via convicted fraudster Schabir Shaik. The killer punch is a never-before-discovered consultancy between Thomson-CSF (as Thales was known then) and Minderley Investments, a company belonging to Shaik and registered in the British Virgin Islands.

Thomson-CSF is one of the companies that allegedly paid millions in bribes to various South African government officials to win tenders to supply weapons to the armed forces. According to the Sunday Times, the Scorpions could never find this link, which sunk their investigation into Maharaj.

What the Scorpions did do was subpoena Maharaj, his wife and Shaik under S28 of the NPA Act. The presidential spokesman admitted as much on Tuesday. He insinuated that what the M&G had was not factual, and this wasn’t a debate about whether or not he had lied to the Scorpions, but about the issue of balancing rights. He said that the NPA Act took away certain Constitutional rights (he dramatically flourished a copy of the Constitution as he said this) but also protected evidence provided under these circumstances in S41 of the Act. Therefore, the M&G had no right to the recording, nor did it have a right to publish the information it obtained from the recording.

The only thing in the Sunday Times story that was new from all the years of allegations is the agreement between Shaik and Thomson-CSF, Maharaj pointed out, and even that was led by the qualifier: it is believed.

“For the first time, I have evidence of criminality by the media. The Mail&Guardian. It is for the police to investigate the case and decide if it sustainable. The courts will decide who will prevail,” Maharaj said. He said there was an acknowledgement by the M&G that it has S28 recordings.

Ironically, Maharaj also said he had argued in court that S28 violated his Constitutional rights.

What the M&G stands accused of – and Maharaj used the analogy of knowingly buying a stolen television – is complicity in the dissemination of S28 information. But when asked why he didn’t take this up with the NPA, where the leak must have taken place, he said he had once tried to tackle the authority on the matter and it had burned him. “I am not prepared to open myself to loose balls that will hit me,” he said.

Maharaj’s two arguments are centred on the M&G’s alleged complicity in the theft of evidence and the fact that he wasn’t charged by the Scorpions the first time.

Rudi Krause, Maharaj’s lawyer, confirmed the charges had been laid at a Johannesburg police station. “They (the M&G) have been charged for a contravention of Section 41, subsection 6 of the NPA Act and we have also asked the police to investigate the possibility that the recordings in the possession of the Mail&Guardian may have been stolen from a safe location either within the National Prosecuting Authority or the Directorate of Special Operations [the Scorpions].”

Krause said his client had not said the M&G helped steal the recordings, but that “theft is a continuous affair”, meaning those who knowingly possess an item after the fact are guilty of theft too. On that basis, the police had been asked to investigate.

The M&G said it would be writing to the director of public prosecutions on Tuesday to request permission to publish the information in its possession.

M&G editor Nic Dawes has also indicated the paper thinks certain parts of the NPA Act wouldn’t pass Constitutional muster, but had decided to fight the issue within the available legal framework. DM