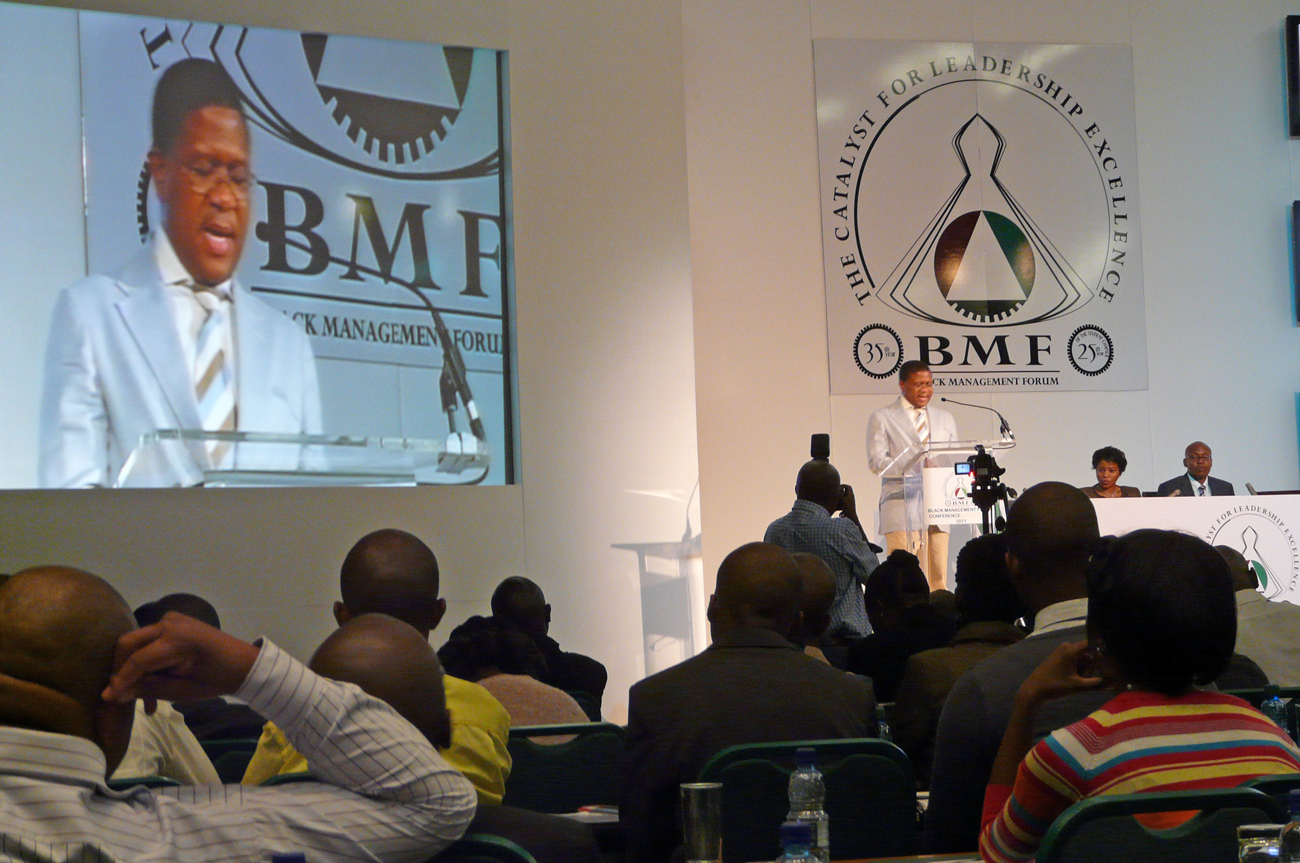 You have to hand it to sports minister Fikile Mbalula. Scant weeks after a model stepped forward to claim she was pregnant with his child, the story seems to have blown away. It wasn’t by mistake, though. Oh no. The minister has crafted a careful comeback strategy. Other scandal-beset politicians take note. By SIPHO HLONGWANE.

It isn’t often sports minister Fikile Mbalula makes a speech literally cribbed from the Polokwane Resolutions. But he did so at the Black Management Forum’s annual general meeting at Gallagher Estate in Midrand on Friday. Having to discuss the “land issue” Mbalula outlined the ANC’s line on these things. He avoided the sort of personal charisma and charm associated with the Mbalula brand, and delivered a straight-off political speech about as uncontroversial as you can make the vexed land issue in South Africa. Why choose this particular style on the day?

His starting point? “The Freedom Charter states that the people shall share the wealth of the land,” he said. “We have not yet achieved economic freedom. It should include fundamentally altering the distribution of wealth to the hands of the majority.”

He mentioned the ANC believes these inequalities stem from apartheid and that the strategic sectors of the economy (mining and agriculture) were almost exclusively set aside for whites. He broadly outlined government’s plan of redress and, without saying it in as many words, aimed to strike the balance between the need to urgently address poverty and inequality without resorting to populist methods that would ruin the country.

If you’ve heard this before, that is because it is the exact ANC line of land redistribution and reform.

Mbalula urged the BMF to lobby for a closing of the inequality gap and said it should be jealously defending progressive policies.

He explained his two-hour tardiness (unusual for him) by saying he was actually supposed to be at a meeting in preparation for a sports indaba that starts this week, but had set time aside to speak to the BMF.

But why the dull-as-doornails speech? This is a man on a very long political career path, which is only really beginning. You must not be unambitious. So said Mbalula at a dinner hosted by radio station, Yfm a couple of months ago.

Mbalula may be many things, but he is certainly not unambitious. Three weeks ago, he was charged by a model who approached newspapers including the City Press with infidelity. She claimed she was carrying his child. Now it’s almost completely forgotten.

Perhaps Mbalula recognised the need to brush the issue aside before it hindered his ambitions. He first wanted to sue City Press to prevent them publishing the story. Then he swung about and adopted the opposite strategy: he helped the controversy end as soon as possible. He apologised to his wife and the public.

He then momentarily forgot his strategy when he claimed that he was the victim of a political conspiracy. That only helped to prolong the issue.

Then the #razzmatazz swung into action: Mbalula announced a commission of inquiry into cricket, to be headed by Judge Chris Nicholson.

He has now appeared at the BMF conference, punting the ANC line on transformation and employment equity. He will probably continue along similar lines until we’ve all, but forgotten about his adultery.

Mbalula does have a serious problem on his hands though. The ultra-ambitious Malema, his primary backer for a top-six position in the ANC, has run into serious trouble. Operation “Make Mbalula the ANC SG” isn’t working. If he is to convince ANC voters that he is the right man for the job, the last thing he will need is a sex scandal hanging over him. Not only does it make him look bad, it draws unhappy comparisons to a certain polygamist president.

Hence the need to get out there and show a man of action, who is both eager to tackle the tough situations and politically astute and progressive. So far, the #Razzmatazz comeback tour is going fantastically. DM