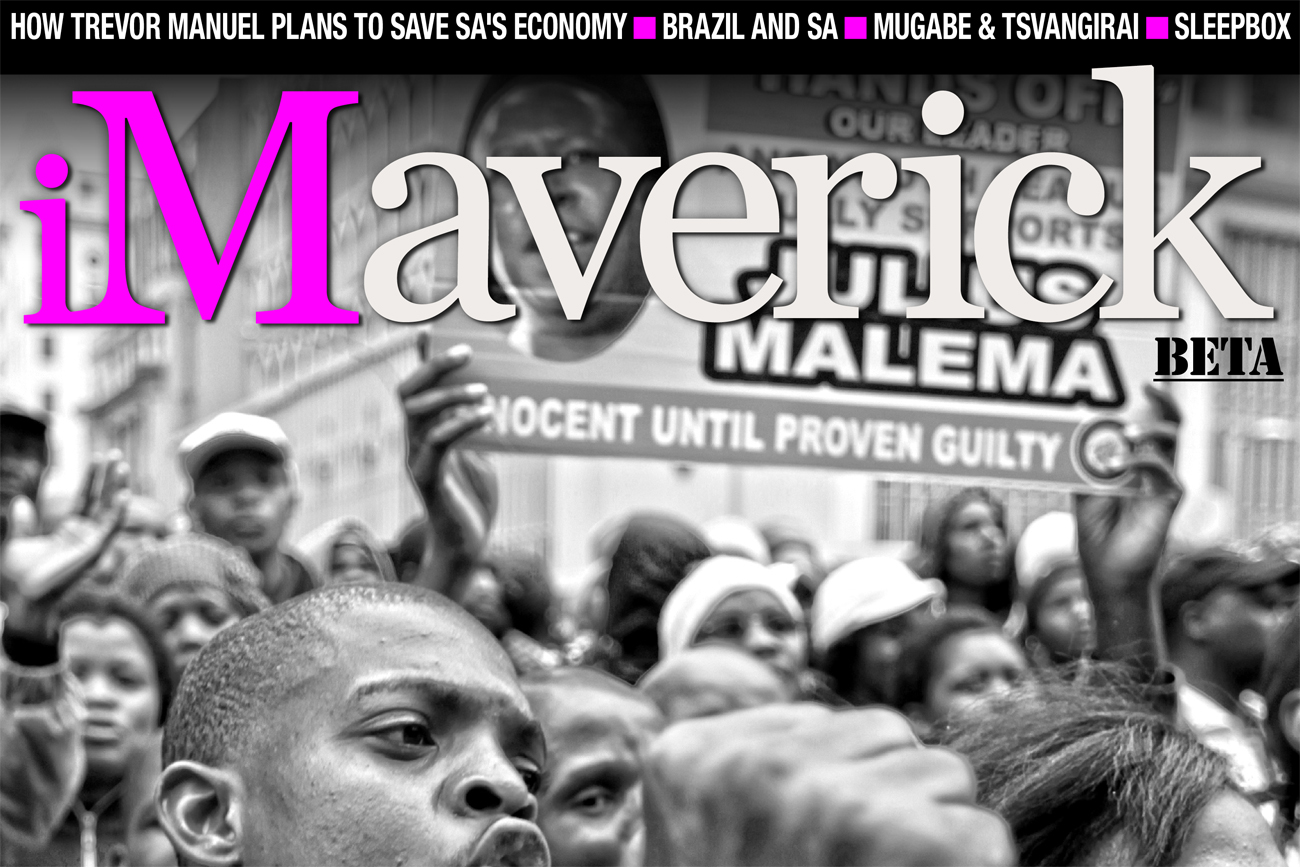 Can Julius Malema do it alone?; How Trevor Manuel plans to save South Africa's economy; Brazil & South Africa, and their World Cups; Tsvangirai on Mugabe; and what exactly is a sleepbox? By iMAVERICK TEAM.

After a complaint was laid about Clive Derby-Lewis’s latest application for parole being denied, Public Protector Thuli Madonsela is set to hold talks with the minister of correctional services about his current medical treatment for cancer. Somehow, we don’t see this leading to him walking free on medical parole. By THERESA MALLINSON.

Sudan made good on all its war-talk by bombing a refugee camp last week. Nothing unusual there, except for the fact that the camp is in another country – the newly independent South Sudan. Not that Khartoum particularly respects South Sudanese sovereignty. By SIMON ALLISON.

South Chinese villagers wielding clubs and stones attacked an industrial park, incensed by reports that an official had sold land without compensating them, police and media said on Sunday in the latest flare-up over commercial development. By CHRIS BUCKLEY (Reuters).

Brazilian police seized control of Rocinha, the largest slum in South America, on Sunday morning. The raid was part of an ambitious urban pacification project designed to turn Brazil’s reputation for violent crime around. Why the sudden rush to sort out the decades-old problem? There’s a World Cup coming, of course. By SIMON ALLISON.

Israeli Prime Minister Benjamin Netanyahu said on Sunday the full extent of Iran’s nuclear programme was not reflected in a recent UN report, which said that Tehran appeared to have worked on designing an atomic bomb. By ARI RABINOVITCH (Reuters).

Thousands gathered in Rome to celebrate the political demise of Silvio Berlusconi on Saturday, whistling and shouting insults as the 75-year-old media magnate drove to hand in his resignation as prime minister. By CRISTIANO CORVINO and GABRIELE PILERI (Reuters).

@BIRGITTAJ SPEAKS OUT AGAINST US COURT RULING

Did you know that the US government is allowed to access your Twitter account? Well, that’s according to a court ruling handed down on Thursday, which saw a judge rule against three WikiLeaks volunteers who sought to keep their Twitter-account information private. By THERESA MALLINSON.

The ANC’s national disciplinary panel verdict in the case of the ANC’s middle ground versus Julius Malema is the end of a chapter in our politics. And thus begins a new chapter. There are several questions to be asked, several issues that we are only now beginning to see as important that are now being raised. By STEPHEN GROOTES.

ANALYSIS: HOW THE NATIONAL PLANNING COMMISSION PLANS TO SAVE SA’S ECONOMY

So, here it is. The culmination of all the National Planning Commission’s work for the last 18 months: The National Development Plan. The document that tells us what we want South Africa to look like in 2030, and what we need to do to get there. We have a vision statement, and a plan that addresses the nine challenges earmarked by the diagnostic report. There’s a lot that the document delves into, and it is going to keep political analysts in bread for years to come. Obviously, we were most interested in the economic implications of the plan. How do we get from where we are now to 11 million more jobs in 2030? By SIPHO HLONGWANE.

Rocks and bottles littered the path of Schubart Park residents who marched on Thursday demanding access to housing. The state government came to the party, but will the municipality? By GREG NICOLSON.

SIPHO HLONGWANE: A TROUBLED WEEK FOR THE BLUE HOUSE

Since becoming a party of governance, the slogan for the Democratic Alliance has been “because we’re better than the other one”. As it turns out, no they’re not. The DA’s leaders are given to bouts of populism and its members in power
are also given to creativity with the rules that govern how a municipality’s money ought to be spent.

A rather extraordinary meeting in Zimbabwe ended with both Morgan Tsvangirai and Robert Mugabe calling for peace in their troubled country. Bob might have been crying crocodile tears, but Morgan was very serious and not afraid to tell the world – and Zanu-PF – how he sees things. By SIMON ALLISON.

ROCINHA GETS A BRAZILIAN ‘TIME TO TIDY UP A NATION FOR A PARTY’. WHAT SOUTH AFRICA SAYS ABOUT BRAZIL, AND VICE VERSA

On Sunday, at 4am local time, the Brazilian government moved three thousand troops, backed by major military hardware, into the mean streets of Rio de Janeiro’s largest slum—Rocinha. The sprawling area is home to almost 100,000 people, and it overlooks some of the city’s swankest areas. What does this mean for the city’s FIFA World Cup 2014 and Olympics 2016 preparations? And what does it say about South Africa’s own World Cup—now almost lost in the mists of time? In a word: everything. By RICHARD POPLAK.

On Sunday the embattled government of Syrian President Bashar al-Assad called for an urgent Arab League summit as it faces the harsh reality of regional and international isolation over its crackdown against an eight-month-old uprising. By KHADIJA PATEL.

REPUBLICANS IN FOREIGN POLICY SCRUM WHILE OBAMA CARRIES THE BALL AWAY

On Saturday evening, eight Republican candidates for their party’s presidential nomination rumbled with each other in yet another of episode of what is fast becoming an almost interminable series of debates – although this session was the first one broadcast over an actual TV network, CBS, in place of previous debates that had to be viewed on one or another of the country’s cable channels. The focus for the debate in Spartanburg, South Carolina was foreign policy. Oops. By J BROOKS SPECTOR.

Russia’s unsuccessful launch of a Mars moon probe points up the problems of a once-pioneering space industry struggling to recover after a generation of brain drain and crimped budgets. By ALISSA DE CARBONNEL (Reuters).

Endless hours of waiting in airport departure lounges can be hell for weary travellers, which is why two Russian architects have come up with a novel snooze pod that can be rented by the hour. Pretty cool stuff, actually. By MANDY DE WAAL.

He’s hosted the event eight times already, to the acclaim and satisfaction of all parties concerned. But since 2004, the Academy of Motion Picture Arts and Sciences has taken a new tack, trying desperately to attract a younger audience. Why will Billy Crystal be taking the podium again at next year’s Oscars? By KEVIN BLOOM.

In what should theoretically be a heist film for our times, Tower Heist is broadly modelled on a Bernie Madoff-esque Ponzi scheme set in a mid-financial crisis New York, with the 99% bent on getting back what is theirs. By CARIEN ELS.

Africa’s top ranked team the Ivory Coast, began preparations for the upcoming African Nations Cup finals with a 1-1 away draw against South Africa in a friendly on Saturday. By MARK GLEESON (Reuters).

FEDERER PEAKING IN TIME FOR LONDON

Just a week before the ATP World Tour finals, Roger Federer signalled his return to the top in timely fashion with a sensational run to the Paris Masters title. By JULIAN PRETOT (Reuters).

Jamaican Usain Bolt and Australian Sally Pearson were named Athletes of the Year by the International Association of Athletics Federations (IAAF) on Saturday.

STEYN ON TOP OF THE WORLD

South African fast Dale Steyn has been holding the number one slot in the list for current players since the Durban Test against England in December 2009, although his first time at the top of that table came in April 2008. In 47 impressive Tests, the 28-year-old has taken 244 wickets. Such is Steyn’s dominance in the bowling rankings that second-placed James Anderson of England trails him by 91 ratings points, while his team-mate Morne Morkel, who is the second best South Africa bowler in third position, is 126 ratings points behind.

Double Formula One world champion Sebastian Vettel suffered his first retirement in more than a year on Sunday after a sudden tyre blowout at the first corner of the Abu Dhabi Grand Prix. By ALAN BALDWIN (Reuters).

SOMBRE MOOD AT PENN STATE AFTER WEEK OF TURMOIL

Penn State’s football team played its last home game of the year on Saturday before a sombre crowd still in shock from a child sex abuse scandal that has ripped the university apart in the past week. By IAN SIMPSON and ERNEST SCHEYDER (Reuters).