The day the ANC claimed its soul back 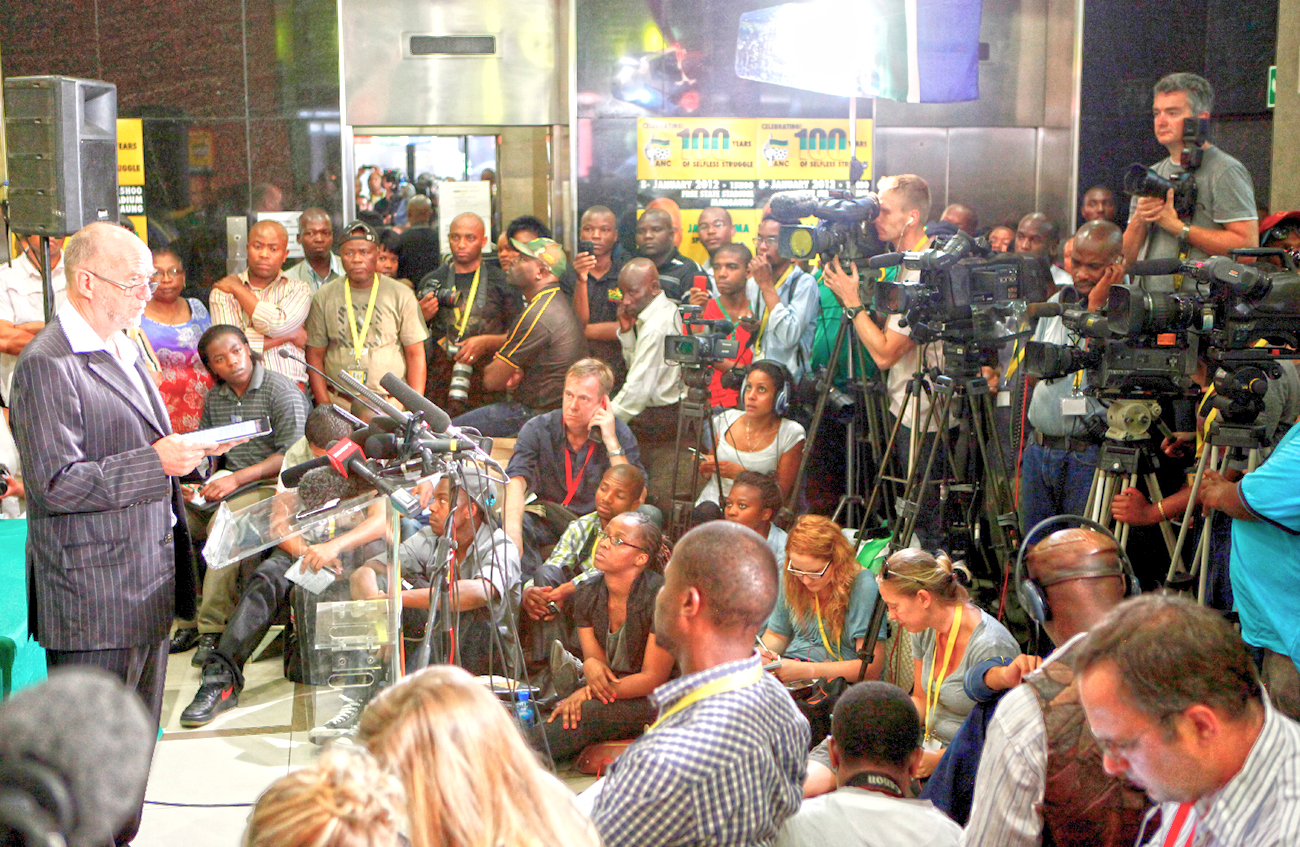 When the dust settles and the medics come to take away the wounded, lying buried in the ground will be Julius Malema, and with him the threat that he has posed to the ANC, to our future, and to us directly. His agenda is no more. The mines are safe. With him will be the political corpses of Fikile Mbalula, Tokyo Sexwale, and, finally, Winnie Madikizela-Mandela. By STEPHEN GROOTES.

It is rare for one single event to change the entire political landscape. This is such an event. The power relationship in the ANC, and in the country this week, is completely different to what it was last week. In short, President Jacob Zuma is now the person in charge. Anyone who crosses him is political dead meat.

This is also a week in which the ANC’s middle ground reclaimed the party. The extreme has been overcome, beaten, subdued. It is no longer in charge. The fact is, the middle ground of the party is now in the driving seat. It is a victory for the older generation of the party. It’s also a victory for a slow pace of modernisation, rather than, as Malema would have had it, “radical policy change“.

But now to the judgment. It is long (136 pages) and detailed. The summary alone comes in at 36 pages. The reason for this is that not only does it deal with several cases against several people, it also deals with organisational power, and how the ANC, its Leagues, and its Alliance partners relate. This is important; by defining these relationships, the national disciplinary panel is also defining what action it has power to take. It was clear that Hanekom had had access to the best possible legal advice. There was something about the way he presented his report that showed he knew it was right, and he knew it was just. With a back-story like his (white farmer, expelled from land by apartheid government, part of the ANC for nigh on 30 years etc.) he was, perhaps, the perfect person to be in the eye of this particular storm.

From the definitions of the panel, it is clear that the Leagues are subordinate to the ANC. In short, if the ANC Youth League takes action against a member, the ANC is not compelled to act against that member. But if the ANC takes action against a member, the ANC Youth League is compelled to take action. In other words, if Malema is found guilty by the ANC, his punishment applies to his status as ANC Youth League president. The League had argued during the hearings that this was not the case, that in fact it was independent, and that thus, when Malema and other leaders were speaking on issues (notably Botswana), they were representing an independent organisation. But Hanekom and the panel pointed to the dissolution clause in the League’s constitution. If it is dissolved, the assets go to the ANC. That lawyer of theirs was worth every penny.

Then there is the concept that the charges were brought against Malema improperly, that the national officials (Zuma and the other top five leaders) were not a properly constituted body, and thus couldn’t lay the charges; Dali Mpofu at work. It was never going to fly, and it didn’t.

And then, finally, to the charges. It’s a measure of how we’ve become used to the antics of Malema and his ilk that when you read through the series of events, they really are quite outrageous. It is amazing to think that the League’s leaders, led by Malema, actually went into a meeting of the ANC’s top officials and tried to disrupt it. There were Cabinet ministers in the room, and they refused to leave. It’s absolutely crazy. It also feeds into another point Hanekom made, that organisations are more than sets of rules, they also have cultures. And in the ANC’s case, there has been a long tradition of a culture of respecting your elders. For the more mature members of the ANC, this particular act must have been quite shocking.

In the end, the fact that these leaders were suspended for two years, but that sentence is suspended for three years makes sense. It is a serious offense, but it is also a first offense.

However, this ruling could turn out to be critical later. As Malema is likely to be unable to continue as ANC Youth League leader, his deputy, Ronald Lamola could well take over. If it’s not him, then place some money on the League’s treasurer, Pule Mabe, who’s very close to Malema. And both of them now have a suspended sentence hanging over their heads. In a way, they are now in the same situation Malema was in May last year, when the panel ruled he was guilty, and gave him a suspended sentence. Good luck to them.

An interesting aspect to this ruling is the number of times Hanekom and the panel referred to international investors. It was almost as if this was crafted as the news about the Moody’s outlook downgrade was breaking. In particular, investors were referred to in the League secretary-general Sindiso Magaqa’s case. He was accused and found guilty for his attack on public enterprises minister Malusi Gigaba. Hanekom says these comments would have sparked uncertainty, it would have looked as if the minister of a very important portfolio, in which parastatals go to the open market to borrow money (to build unimportant things like, you know, power stations), did not have political support. It’s a good point, and a statement that Magaqa perhaps had not thought through very fully.

Right, and on to Malema himself.

Crucial here, as you may remember, is what happened last year. Then Malema pled guilty, as part of a plea bargain, to sowing division. His sentence, apart from the anger management classes etc., was that he would be suspended. But that part of the sentence was suspended. Now, as Hanekom put it rather crisply, “In the period of 18 months he has been found guilty on three charges of sowing division and bringing the party into disrepute.” As a result that suspension now kicks in. Two years. In other words, he was given lots of rope. He used it very effectively.

And then to the other charges, that he compared former President Thabo Mbeki with President Jacob Zuma and that he would work to overthrow the government of Botswana. Long story short. Guilty. Five years suspension.

There will be an appeal. However, this verdict was unanimous. The sanctions are strong. It would be very difficult for the appeals panel to overturn any of these verdicts in any comprehensive way. The same applies for the sentences. While Malema might want to start with appealing last year’s conviction, he might find that difficult, as it was a plea bargain. If the appeals panel were to make major changes, it would look like serious political meddling had occurred. And, if anything, the appeals panel is less friendly to Malema than the disciplinary panel. Led by Cyril Ramaphosa, it also features Jessie Duarte and Trevor Manuel.

Technically, Malema is still an ANC member and leader of the ANC Youth League. He has 14 days to officially lodge his appeal. He will stay on in those positions while the appeal is heard. But once that panel rules, that’s it. The national executive committee can review the decisions if it wants to. But the heady talk of the NEC overturning this is just that: talk. Malema does not appear to have the numbers.

Then there is what has just been a small nagging problem, but will now transform into a huge overwhelming nightmare. His political protection is gone. There seems to be clear evidence of corruption against him. Why else would the Hawks still be investigating (oh shut up, you cynics!)? And there’s SARS. When you are on top, you are on top. Everything comes to you easily. You break the rules and laugh. But the ANC has, this week, shown that it has rules that you cannot break. And that if you do, you will end up crying.

My prediction: When the appeals panel rules, it’ll be a much smaller story than it has been this week. And when the ANC’s task team investigating mine nationalisation finally reports back, it will be almost a non-event. And if/when Malema is charged and tried for corruption, we won’t even notice. He would have lost his focal point entirely. DM