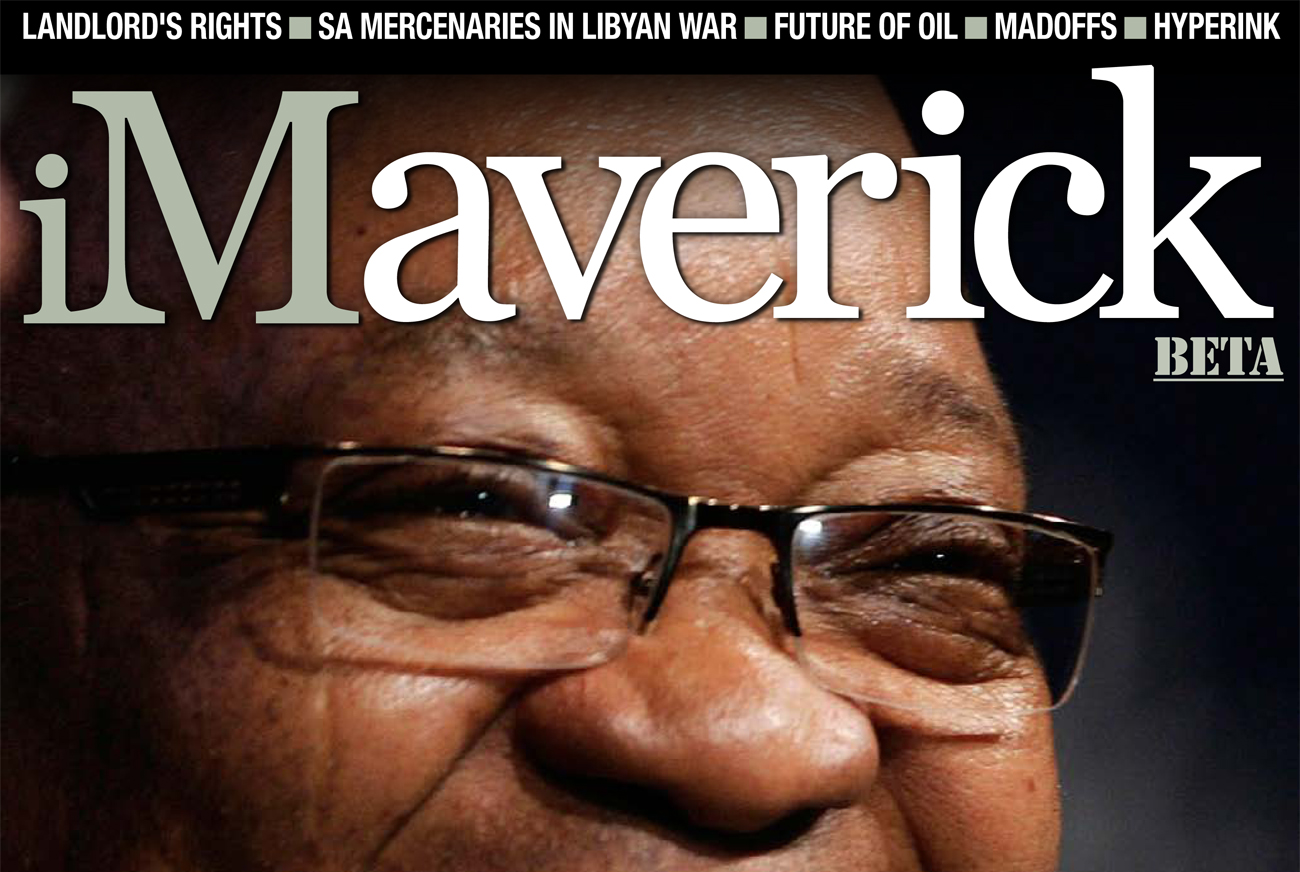 JAY NAIDOO: THE POWDER KEGS OF UNMET EXPECTATIONS IN OUR MIDST

Africa’s future success is going to be measured by how its cities are transformed into dynamic powerhouses of development. Bold decisions are needed to prevent social instability that will threaten our social fabric.

MARK HENNESSY: PEOPLE ARE TOO VALUABLE TO BE USED AS MACHINES

“We cannot afford to use people to do work that machines can do.” This was said to me by a Japanese ITC manager in 1968. It still works for me.

DUTCH JEWS AND MUSLIMS UNDER SIEGE

Jews and Muslims are united in Holland, where both faiths face the banning of two practices central to their beliefs: the way in which animals are slaughtered and circumcision. By REBECCA DAVIS.

NYDA TO IFP YOUTH: TAKE A NUMBER, JOIN THE QUEUE

Can the IFP Youth Brigade take a number and wait its turn in the complaints line, please? So said that National Youth Developmental Agency after the IFP youth body called upon the Public Protector to investigate the controversial World Festival. By SIPHO HLONGWANE.

In no uncertain terms, African governments have responded to Britain’s as-yet-unfulfilled threat to cut aid from anti-gay countries. Not unexpectedly, the response has been furious, but Britain might not have anticipated just how widespread the condemnation would be. By SIMON ALLISON.

Unable to deal with Boko Haram using normal methods, the Nigerian government has unleashed its military on the militants. Security forces are now searching every house in the problem city of Maiduguri for illegal weapons, and finding plenty. But Boko Haram is nervous about what’s coming next. By SIMON ALLISON.

Cubans will be able to buy and sell houses for the first time in more than five decades in a long-awaited reform that legalises what many have done for years, but also restricts how much property they can own, state-run press said on Thursday. By JEFF FRANKS (Reuters).

US INFLUENCE AT G20 NOT DIMINISHED, WHITE HOUSE SAYS

White House officials bristled on Thursday at the suggestion US power within the G20 had been diminished by budget woes back home, as Europe looked toward an economically self-confident China for help. By ALISTER BULL and LAURA MACINNIS (Reuters).

An online video of a Texas judge beating his disabled teenage daughter has caused horror in the US. The incident once again exemplifies the power of the Internet to mobilise public opinion against an individual or group, whether rightly or wrongly. By REBECCA DAVIS.

The English Rugby Football Union (RFU)’s acting chief executive Martyn Thomas announced he was leaving his post on Wednesday as his controversial Cotton Review was scrapped. By REUTERS.

President Jacob Zuma has travelled to this year’s G20 summit in Cannes to highlight the need for global governance reforms as well as enhanced growth, jobs and infrastructure development on the African continent. By KHADIJA PATEL.

On Thursday the Constitutional Court heard a case involving this balance. Slightly surprisingly, several of the judges appeared to be standing up for the rights of the landlord. Yes really. STEPHEN GROOTES was in the public gallery.

The appointment of Michael Hulley as the president’s legal advisor was never going to go down well. He’s not only his personal attorney, but also a director at Aurora Empowerment Systems, the company embroiled in an ugly spat with workers at Orkney mine. Solidarity and the National Union of Mineworkers are both outraged. By SIPHO HLONGWANE.

The murmurs of South African involvement in the botched escape of fallen despot Muammar “Mad Dog” Gaddafi are becoming too loud to ignore. SIMON ALLISON sifts through the reports and rumours surrounding local guns-for-hire and their doomed Libyan adventure.

GOP 2012: PERRY DENIES HIS US CAMPAIGN BEHIND CAIN ACCUSATIONS

Intense European pressure forced debt-stricken Greece to seek political consensus on a new bailout plan instead of holding a referendum after EU leaders raised the prospect of a Greek exit from the euro to preserve the single currency. By DINA KYRIAKIDOU and ABHIJIT NEOGY (Reuters).

THIS TIME, IT MAY BE CURTAINS FOR BERLUSCONI

Silvio Berlusconi was already in deep trouble under the weight of sex scandals, political setbacks and judicial investigations before Italy’s financial problems put his career on the skids. By DEEPA BABINGTON (Reuters).

NEXT OIL RUSH: MAYBE NEXT DOOR, MAYBE ACROSS THE GLOBE, BUT ALWAYS WITH RISKS, COSTS AND ENVIRONMENTAL DAMAGE

A shift is coming with regards to the supply and politics of world oil. The new black gold is going to be expensive and hard to get at properly. However, growing stability in a place like Libya, as well as big oil reserves in diffficult-to-reach spots, means more oil will start to come on line. By J BROOKS SPECTOR.

Readers of guardian.co.uk, one of the most popular English news sites in the world, can now tell a twitter bot to go and “fetch” content. As the Guardian continues to eschew paywalls in favour of an open, digital-first approach, innovative social media tools are crucial to buoying readership and, hopefully, driving revenues. By MANDY DE WAAL.

Unlike traditional publishers that take ages to get manuscripts into print and on shelves, Hyperink’s quick and easy to read e-books are ready in a month and cost about $1,000 to produce. Part of the revolution that’s driving a revision of the publishing industry, Andreessen Horowitz liked the business model so much that the investors in Skype, Facebook and Twitter are backing the business to the tune of $1.2 million. By MANDY DE WAAL.

UNFORGIVEN: THE AFTERMATH OF RUTH AND ANDREW MADOFF’S 60 MINUTES CONFESSIONAL

Since their appearance on CBS’s 60 Minutes on Sunday, Ruth and Andrew Madoff, wife and son of Ponzi fraudster Bernie, seem to have got what they originally wanted: a whole lot of media attention for their new, tell-al book. Because what they haven’t got, despite their sad TV faces, is anyone’s sympathy. By KEVIN BLOOM.

AFRICA CLOCKWISE: A CONVENIENT WAY OF LAUGHING AT YOURSELF

Surprisingly often, the best way to deal with a crisis is simply to have a good laugh about it. Lighten up a little, have a chuckle, let the tension dissipate, then figure out a solution. LESLEY STONES relished comedian Mark Sampson’s take on global warming in his new show, Africa Clockwise.

Pakistan cricketers Salman Butt, Mohammad Asif and Mohammad Amir were jailed on Thursday for their roles in a spot-fixing scandal which the judge said had damaged the integrity of a game renowned for its fairness. By Reuters.

DOOHAN: STONER WILL BE TOUGH TO BEAT

Casey Stoner will be a hard rider to beat over the next five years as he strives to match the multiple titles won by Italians Giacomo Agostini and Valentino Rossi, says five-times world champion Mick Doohan. By Reuters.

The return of swimming great Ian Thorpe after a five-year hiatus has provided a much-needed fillip to the sport after the negative headlines surrounding performance-enhancing swimsuits, Australian teammate Libby Trickett said on Thursday. By REUTERS.