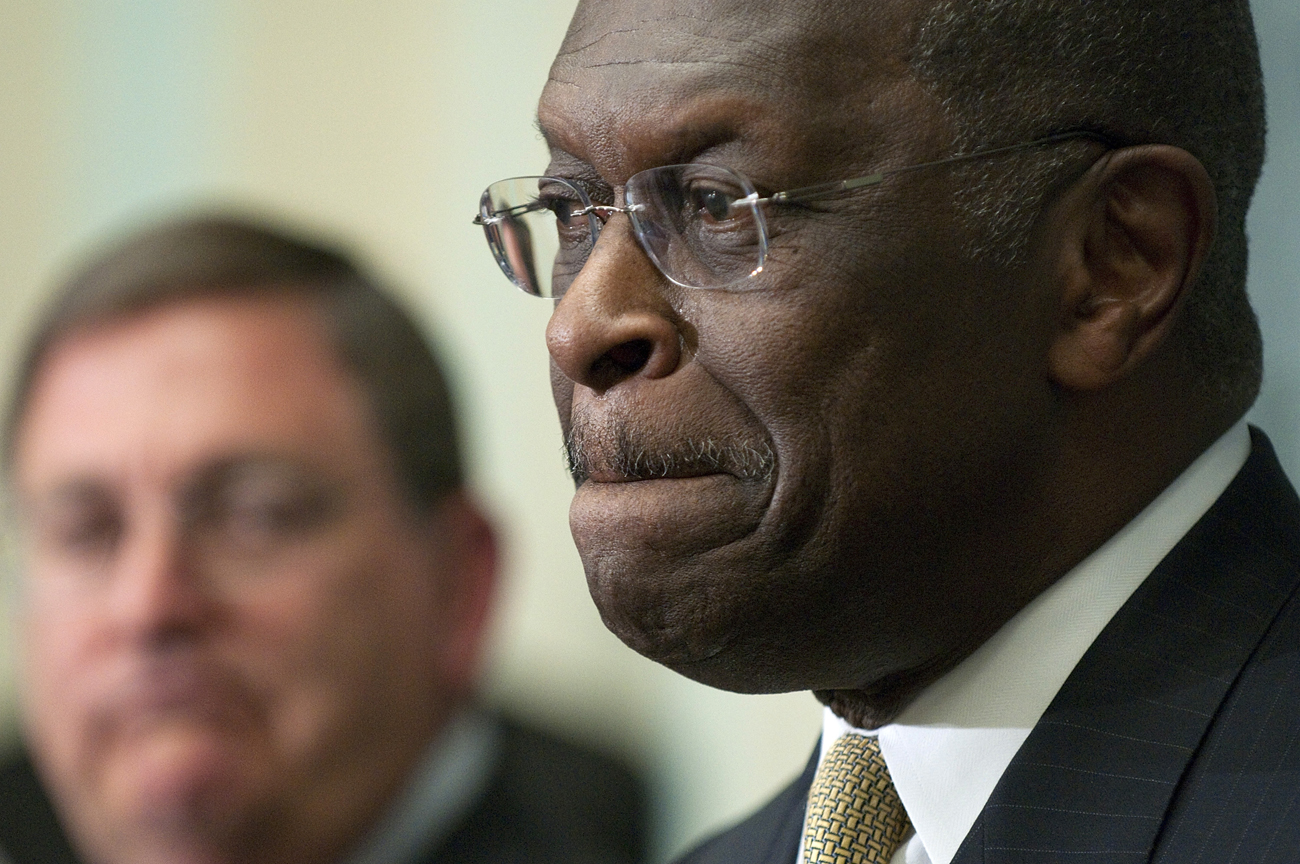 Following several days in which the Herman Cain juggernaut was rocked by allegations of sexual harassment and payoffs, the Hermanator laid the blame for outing him on Rick Perry’s staffers. One could almost hear the  zeitgeist whisper: “Welcome to national politics, Mr Cain!” By J BROOKS SPECTOR.

This sudden furore is the first real test for a candidate who has staked his claim by being the “un-candidate”. His appeal was as the authentic American original, a non-politician, a man who faced cancer and beat it, who rose through the corporate ranks quite literally from the ground up and who rescued a fast food company on life support.

Part of Cain’s mystique is his aura of a businessman who cuts through all the chaff and gobbledygook of the professional political class. He cheerfully admits he doesn’t have a mastery of all those arcane facts a policy-wonk is supposed to be able to chant in his (or her) sleep. In essence, Cain is saying, “Hire me because I know what I’m doing – and if there is something I don’t know, I’ll buy me an expert who does.”

Unfortunately, his narrative is now receiving the kind of incoming fire that calls for deft hands at the controls – in other words, the help of cynical, experienced political operatives who can turn danger into opportunity. Instead, the Cain campaign has a candidate who ended up spending a whole week slowly adding to his recollections, repositioning here, changing a bit there, all with the kind of editing that only made his media tormentors more and more anxious to take another whack at him.

By mid-week, coming out of a previously organised speaking event Cain ended up in an  “ambush” by reporters with some on-camera pushing and shoving, as he hurriedly exited the building. Not a good way to show he is a man uniquely able to be in control of events. This tussle, after all, isn’t a nuclear standoff, simply some rude questioning.

By the end of the week, The Washington Post’s Chris Cillizza could sum up the change in temperature with: “Oh Herman, we hardly knew ye. As quickly as the former chief executive of Godfather’s Pizza established himself as perhaps the most unlikely front-runner in modern presidential campaign history, Herman Cain watched it fall apart under a steady drip, drip, drip of allegations of sexual harassment lodged against him by women with whom he worked at the National Restaurant Association in the 1990s.”

As the week rolled on, Herman Cain and his team began to blame fellow candidate Rick Perry’s people – and in particular a certain campaign aide who had once worked for Cain – for ferreting out the story in the first place, and then leaking it to the blog, “Politico”. Following that, Perry’s people then pointed accusatory fingers at Mitt Romney’s campaign staffers as the ones with the most to gain from the mess. As a result, The Washington Post titled a column by one of its crack political writers, “Cain Sets Off Circular Firing Squad”.

This is hardly good news for Cain or the rest of the Republicans. Any moment now, someone is going to quote novelist Robert Penn Warren’s protagonist, Willie Stark, from that great tale of political and personal corruption and deception, All the King’s Men wherein Stark tells an aide: “Man is conceived in sin and born in corruption, and he passeth from the stink of the dydie to the stench of the shroud”. And the first primary and caucus are still weeks away.

All of this has come as Herman Cain also had a particularly wobbly interview with PBS-TV’s Judy Woodruff in which he managed to jumble up China’s long-time nuclear weapons capability with its intentions to put one conventional aircraft carrier into service, as well as its lack of any intention to develop nuclear-powered carriers. In critiquing this performance and giving him a barely passing grade, The Economist wrote: “Herman Cain stated in an interview with PBS’s Judy Woodruff that he thinks China is a potential military threat to America:

‘They’ve indicated that they’re trying to develop nuclear capability, and they want to develop more aircraft carriers like we have.’ This created the unfortunate impression that Mr Cain was unaware that China has had the bomb since 1964. Mr Cain’s chief of staff, Mark Block, then took to Fox News with the claim that Mr Cain had meant to allude to a Chinese intention to develop nuclear-powered submarines and aircraft carriers. Today National Review [a strongly right-wing Republican-supporting journal]  Online’s Patrick Brennan patiently explains that China has had nuclear-powered submarines since 1974, and has no current plans to build nuclear-powered aircraft carriers. He concludes: ‘Cain deserves some credit for addressing his critics and offering a substantive answer about China as a security threat, confirming reports that he has been cramming on foreign policy, but he still wasn’t completely coherent or informed. Unfortunately, the fact that his campaign manager offered an inaccurate clarification also indicates that the foreign-policy team surrounding him may still be weak, despite his own growing knowledge. He may or may not, in this campaign, have time to integrate his crash courses in foreign policy into a coherent message about America’s global role’.”

At best, Cain’s performance would get a “gentleman’s C”, maybe better than an “H” for woodshop, but not the grasp of issues suitable for the leader of the world’s most powerful nation.

If that were all there was to be concerned about, some concentrated cramming might be enough, but Cain’s trademark 9-9-9 tax plan has taken on water as well, as analysts point out it would significantly up the overall tax burden on working and middle-class families, even as it lessened the net tax bill of the wealthy. The overall effect, at least with commentators who are shaping the way the candidate’s message is being perceived, has been to label Cain as the not-really-ready-for- prime-time candidate.

And while Herman Cain’s explanations of his relationship with an evolving truth continue to be mismanaged by the candidate and his Svengali-like campaign manager Mark Block, opponent Rick Perry has had his own brush with controversy. Incidentally, Block’s chequered history as a political operative has become the fare of media coverage, evolving from his bizarre but mesmerising campaign video for Cain in which Block appears on camera talking about his unconventional candidate as he takes a deep drag on a cigarette.

As far as Perry is concerned, in a video of his recent public appearance in New Hampshire, Perry grimaces and giggles and generally behaves in a way that left at least some viewers and attendees seriously wondering if he was under the influence of demon rum or some serious pain killers at the time.

All this has taken place as polling is starting to show a modest rise in Barack Obama’s fortunes. According to the well-regarded Quinnipiac polling  data collected just before Cain’s travails erupted: “President Barack Obama’s job approval rating is up, from a negative 41% – 55% by 5 October, to a split today with 47% approving and 49% disapproving in a Quinnipiac University poll released today. The president has leads of 5 to 16 percentage points over likely Republican challengers….”

In short, that circular firing squad has come along just as the electorate seems to be trending back to Barack Obama. Surely not the right way to gain the support of a surly, unhappy electorate, fed up with Washington and worried about unemployment and the economy.

Still, with a year to go and with the economy’s circumstances in 2012 unknown, the American presidential election remains up for grabs. DM