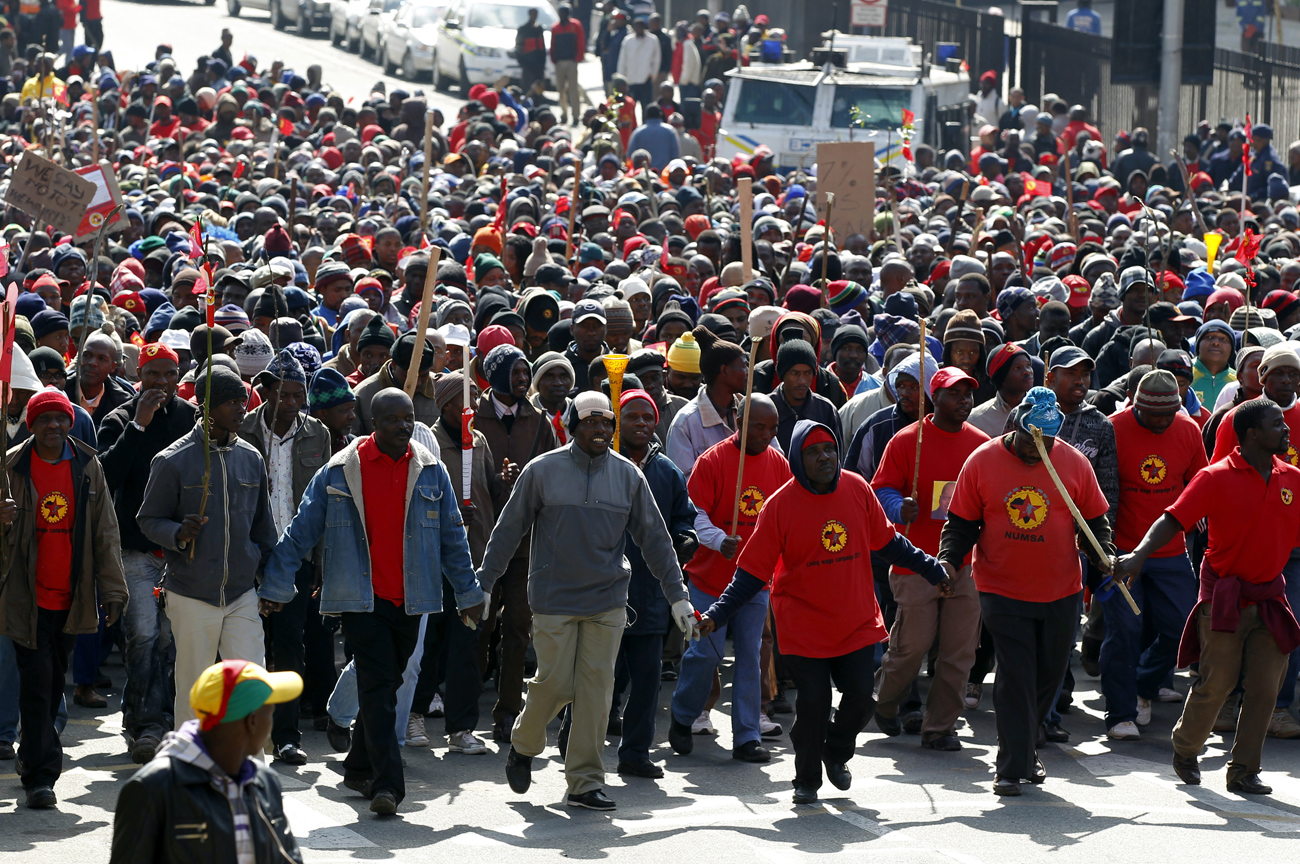 The ANC Youth League’s open invite to all who sympathise with its call for economic freedom to participate in its marches next week has created a bit of a Catch-22 for Cosatu – something its affiliates are set to clash about in the next few days. CARIEN DU PLESSIS reports.

Damned if they do – and damned if they don’t join the ANC Youth League’s march for economic freedom next week to the Chamber of Mines, the JSE and the Union Buildings.

While Cosatu is mulling over whether they should send members to the march, rather than a letter of support, SACP general secretary Blade Nzimande has snubbed the protest, while the ANC is apparently still trying to figure how to grapple with the issue. For Cosatu, the problem is that its unions want to be seen to agree with the broad principles that the League ostensibly wants to march for: job creation, service delivery and a radical change in the economy.

But, looking at Malema’s rhetoric while drumming up support for this march, the unions suspect ulterior motives. Those unions who want to see the back of President Jacob Zuma, such as the National Union of Metalworkers of South African (Numsa), obviously don’t mind these.

Then there’s Malema’s speech at the conclusion of the Youth League’s congress in June, where he said that the League was taking on the role of the leader of the working class because its leaders had been absent.

Unions must be figuring that, if they can’t beat him, best join him. But will they actually support the march by being there – or not? We polled a few unionists we could get hold of.

Numsa general secretary Irvin Jim said the union would call its members who aren’t working on the day (the march is on Thursday and Friday) to join the marching masses, but the National Union of Mineworkers’s (NUM) Frans Baleni said he wasn’t sure if Cosatu was actually participating in the march, and besides, its own members would be at work.

NUM is unlikely to look too kindly on the League’s cause as it disagrees with the kids’ demands for the nationalisation of mines, which the union said would mean job losses for its members.

Municipal workers union Samwu is also yet to decide. Spokesman Tahir Sema said the union was in talks with the federation. “It’s not as easy as supporting any other campaign of the alliance,” he said. “Had this march been organised by another structure of the alliance, Cosatu and Samwu would have supported this march. Right now the ANC Youth League is a very hot topic in the alliance that no-one wants to discuss or support, because it could unintendedly extend to support for a faction.”

An official from a union unsympathetic to the League pointed out that Cosatu had no authority to take decisions on the march on behalf of its affiliates – they would make up their own minds, he said.

Cosatu last week announced it would support the march, but not the League’s push for new ANC leaders.

On Thursday Cosatu general secretary Zwelinzima Vavi again – amid these disagreements between unions – clarified the matter in an address to the South African Democratic Teachers’ Union in KwaZulu-Natal. What he meant, Vavi said, was that Cosatu supported “most” of the League’s demands, but they would meet with the League again on whether to support its actual programme or not. “Subject to these discussions, we see no reason why we should not support them when most of their demands are identical to ours,” he said.

But he called on the League “to ensure that their demonstrations are peaceful and orderly” and not a repeat of scenes in front of Luthuli House at the start of Malema’s disciplinary hearing in August. “We call on the ANCYL to ensure that they stick to the issues of youth empowerment and not use the march for narrow factional battles,” he said.

Cosatu already had to step back for the League once before when, at the beginning of the month, it cancelled a march calling for the banning of labour brokers because the federation thought it could co-incide with a League march (which eventually didn’t take place) and be read as support for it. Cosatu’s leaders at the time cited legal issues as the reason for its about-turn on the march.

The march next week, coming as it does one day after Malema’s disciplinary hearing resumes before an ANC disciplinary committee (it’s set to wrap up a week later), could turn out to be some kind of a referendum on support for Malema – and by extension, opposition to Zuma. Malema has been holding meetings at universities and in the disgruntled community of Themb’elihle to drum up support for next week’s march. On Thursday he also met with the Congress of Traditional Leaders of SA (Contralesa) to discuss “issues of common interest”.

These visits and speeches remind a bit of Zuma’s grassroots campaign before the ANC’s conference in Polokwane in 2007, where he was elected. On Thursday next week, it will become clear whether Malema is on a similar road to popular success or at a cul de sac. DM