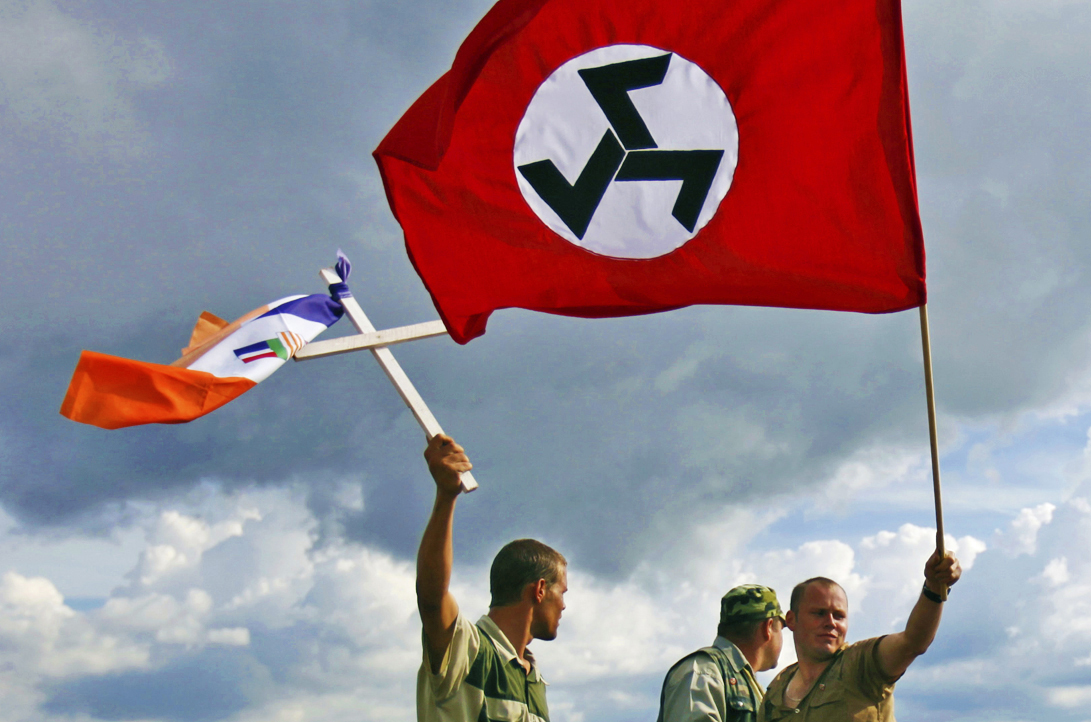 As recently as April last year we'd have rated the extreme right, led by the AWB, as a potentially destabilising force in South Africa. Mortally wounded though the various movements were, they still seemed more than capable of causing havoc. But the Eugene Terre'Blanche trial is providing the formal confirmation: organised white extremism is dead. Unless you think the likes of AfriForum can be radicalised. By PHILLIP DE WET.

More than a year and a half later it seems a silly, trivial incident, the kind of thing that only gets noticed when it involves the President or a media mogul. But when a woman squirted a drink at a group of people, presumably because she wasn’t a fan of their singing, police by the dozen rushed in and the country held its collective breath. Because the woman was white, the singers were black, and it happened right outside the Ventersdorp court where those accused of murdering iconic Afrikaner Weerstandsbeweging (AWB) leader Eugene Terre’Blanche were appearing. On 6 April 2010, there seemed every chance that a minor racial incident in Ventersdorp could become a major race conflagration engulfing the country.

The far right missed its cue, though, as did those who would goad it into action. Terre’Blanche’s funeral saw thousands gathered in Ventersdorp that week, from true white supremacists to some who were simply disenchanted with the post-apartheid dispensation – but not necessarily averse to the idea of a bit of white-on-black violence either. The AWB and its equivalents, already struggling for relevance, members and money, knew the score. But a combination of the wishes of the Terre’Blanche family, a power struggle within the AWB and a plain loss of nerve among the most extreme extremists left them paralysed. Looking back, that was the end of the end.

Things could have gone wrong in a number of ways. The Terre’Blanche family could have been less determined to have a dignified funeral rather than a political one featuring speeches and incitement. Terre’Blanche could have left behind a succession plan, or even just some depth in leadership, preventing the chaos in which his already-floundering organisation found itself. Or any one of a number of loose groupings that were considering acts of violence (bombs, sniper attacks, or just driving through a group of black people with a heavy vehicle) could have pulled it off. Instead, Terre’Blanche was interred, everyone went home, and the far right lost the last of its momentum.

At least two provincial groups of what used to be the AWB tried to organise a mass turnout in Ventersdorp this week to demonstrate outside the courtroom where the murder trial is finally underway. They failed. At least one fringe group has been threatening what they deem to be a revenge attack on Julius Malema for his encouragement of farm murders. Maybe Malema’s increased security played a role, but no attempt seems to have ever been made. What little structure the AWB still had in 2010 seems to have evaporated, with no unity of purpose or channels of communication. If splinter groups are still around, they are deep underground, and they’ll be able to count on little support and even less sympathy should they try anything beyond talking among themselves.

To all purposes, the organised far right is dead.

Left in its wake is little but disgruntlement. Former AWB members and sympathisers we spoke to feel they have no representative body; the Freedom Front Plus are namby-pamby collaborators, AfriForum is legitimising the legal system by using it, and moving to the Orania proto-homeland is an admission of defeat, a self-ghettoisation of sorts. Sure, those damn usurping blacks still need to be taught a lesson, but nobody else is interested, and a man can’t achieve much on his own. Also, you get the sense, day-to-day life just isn’t bad enough to spur them to action.

The only remnant of organisation on the far right is the cult of the Night of the Long Knives, those organising self-defence units and places of safety to which whites can flee when, as they believe, the black hordes descend upon them as soon as Nelson Mandela dies. But much like those endlessly preparing for various other flavours of apocalypse around the world, the faithful do not concern themselves with politics, and tend not to even proselytise much anymore. Ridicule and scorn will do that to you. Moderate Afrikaner organisations, and the ease with which they interact with the rest of society, seems to have stolen their thunder too.

Back in 2010 we feared what may happen if Terre’Blanche was shown to have had a predilection for sexually abusing his (non-white, male) workers, something his former followers would be unable to accept, put down to conspiracy against his legacy and take as a personal insult. The defence in the trial of his murder accused has yet to pursue that line forcefully, but even if it does that no longer seems relevant. We feared what would happen if a majority black organisation, Cosatu or the ANC Youth League, say, tried to score political points at the time of the trial. It’s still not the best idea, perhaps, but also no longer important. We feared that the next crazy-white-man-with-a-gun would provide a trigger event. We feared a great deal, because it was hard to believe that white extremism had fizzled out. Now that Eugene Terre’Blanche has become just another farm killing, we have to admit that the khaki-uniformed bogeyman is decidedly late, if unlamented. DM