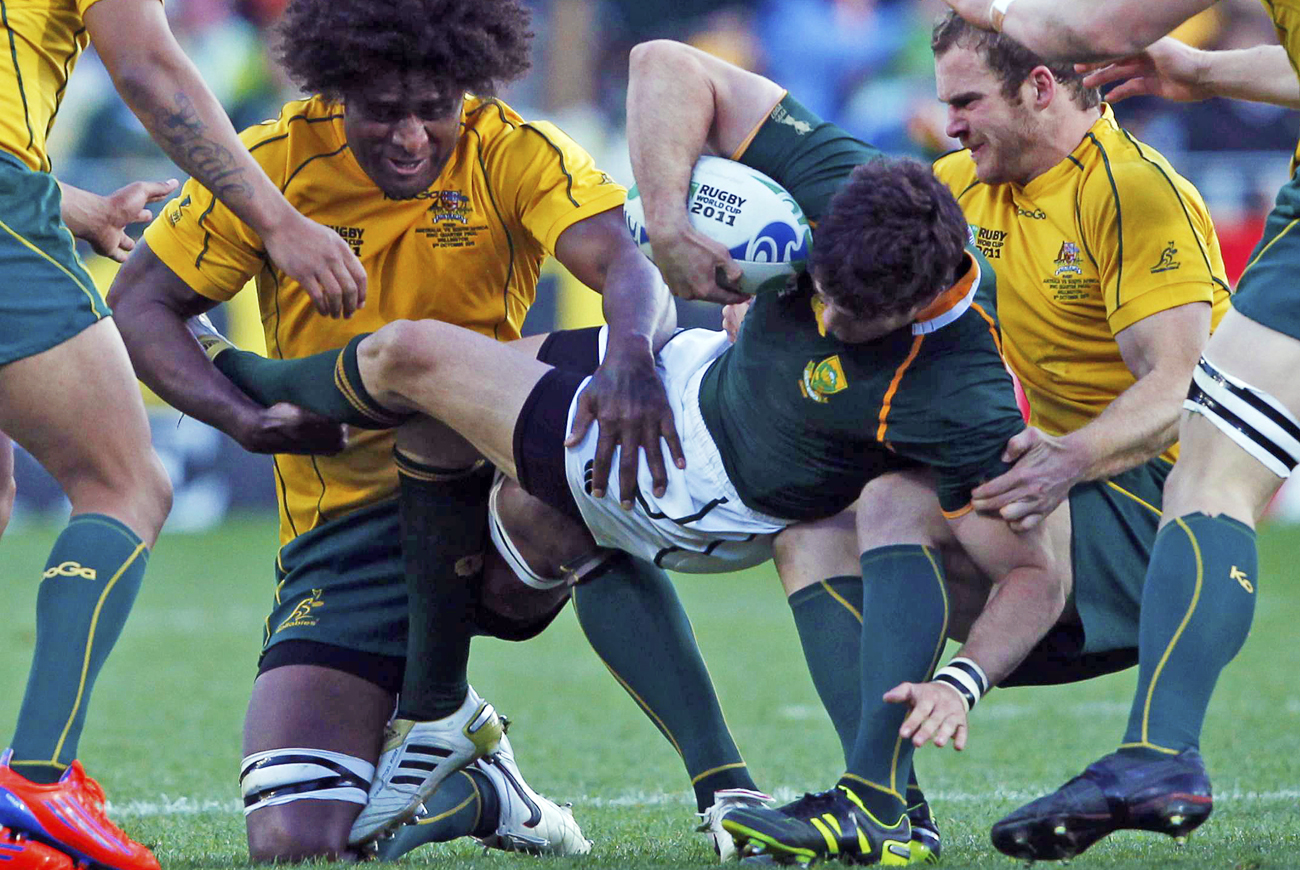 In a heart-wrenching encounter, Australia ended the hopes of the Springboks with an 11-9 victory, in Wellington. STYLI CHARALAMBOUS reviews the match - a game of missed opportunities and dubious refereeing.

The match kicked-off with a nervous, yet intensely physical start by both sides.  Neither side were going to be intimated and threw themselves without care into rucks that referee Bryce Lawrence chose not to adjudicate today and of which his assistant referees were totally oblivious.  The Boks dominated possession and territory in the opening minutes that saw them set up camp out in the Australian 22m. But a few handling errors and suspiciously turned over rucks, saw the Wallabies escape unscathed.

A long-range touchfinder from Quade Copper saw the Boks take the lineout easily enough, but instead of seeking relief by way of a kick, decided to charge up from their goal line, which was pilfered by David Pocock and moved to captain James Horwill for him to crash over for the first and only try of the match. Very much against the run of play, the Wallabies were ahead 5-0 after 11mins.

James O’Connor made amends for the missed conversion with a penalty six minutes later to put Australia 8-0 ahead, and Boks fans scratching their heads at how their team could be trailing after dominating so much of the match.

Heinrich Brüssouw’s departure in the 20th minute would have had South Africans choking on their cornflakes, although replacement Francois Louw played well even as man-of-the-match David Pocock revelled in the free-for-all breakdown area. Such was the physicality of this match that the medics got more on-field game-time than some of the subs. The South African scrum was superb, at times pushing the Wallabies back several meters. The line-out too was efficient, winning Bok throw-ins easily and challenging the Australians each time, often causing headaches for scrumhalf Will Genia.

Morné Steyn landed a penalty from out in front to get the Boks on the board, at 8-3 but went on to show how much Francois Steyn’s ICBM-boot was missed, by failing to land two 50m-plus penalties. The teams ran to the change rooms with Australia ahead 8-3, although it was South Africa who had made all the play, while Australia relied almost solely on counter attacks.

The second half started much like the first, with South Africa dominating play and putting together some great attacking moves, one of which saw fullback Pat Lambie cross the try-line, albeit by virtue of a correctly called forward pass. The Boks, by this stage, were making a mockery of critics that labelled their rugby boring.

The substitutes bench was always going to play a big role in Peter de Villiers strategy, given the experience and talent warming the South African bench. After 50mins, John Smit was replaced by the belligerent Bismarck du Plessis and Francois Hougaard came on for Bryan Habana who had been subject two seriously violent, yet legal, tackles in the first half. The Bok scrum resulted in more advantage as the Australians continued to struggle in this area. Morné Steyn landed another penalty in the 56th min to close the gap to just two points. At 8-6 with 25mins to go, neither set of fans would have felt assured of victory. To illustrate the level of Bok dominance, the Australian tackle count hit the 100 mark by this stage of the match, compared to the Boks’ 36.

The Wallabies soaked up most of the Boks threats, and at times with last-ditch efforts to steal the ball or the Boks offering up possession by way of handling and ruck infringements.

After some enterprising backline play, that moved from one touchline to the other, the Boks set up a ruck for Steyn to drop into the pocket and land a drop goal to put the Boks ahead for the first time in the match, after 60mins. At 9-8 the crowd were sensing the Bok comeback, on the scoreboard, at least.

Victor Matfield again marshalled the lineouts like no other lock in world rugby can, stealing six Australian throw-ins along with the other Bok jumpers. The Boks were now dominating almost every facet of play, bar the breakdown, with the Australians were desperate not to concede another score, as the Boks launched wave after wave of attack. Often it was only the presence and tactics of David Pocock and desperate defence of Horwill that stopped the Boks from adding to their score. An example of which was when Fourie du Preez was stopped centimetres from the line, coughing the ball up in the tackle, which was in turn stolen back by South Africa for Patrick Lambie to attempt a drop-goal that was achingly close to bisecting the uprights.

This was a most entertaining game of rugby although maybe not of the same rugby quality as the Wales v Ireland match, but was nonetheless heart-stopping at times and will be labelled “epic”, when the tears dry from South African eyes. No doubt Bryce Lawrence will enjoy it too, when he sees for the first time watching the replay on Monday.

James O’Connor regained the lead for Australia in the 72nd min, as Danie Rossouw infringed at the lineout. The scoreboard showed Australia ahead at 11-9, and one could feel the anxiety gush straight from the TV set into millions of Bok fan homes. But despite the Boks never-ending attempts, the Australians hung on to win, scraping through on measly crumbs of possession.

The Boks won every facet of this game, except the one that counts. Fans will rue ample missed opportunities and the woefully inept display of refereeing that,admittedly, went against both sides. For some senior players, this is the end of a glittering road that saw them win the World Cup, Tri-Nations and a Lions tour.

There are many exciting prospects, and current members of the team that will ensure South Africa remain a force in international rugby for years to come. For now, however, the country will be in mourning after a display of rugby in which they could not have done more, except win the game. Critic’s sharp words for the coaching staff will no doubt ensue, but today they showed the kind of rugby the team could play with a fully fit squad that they were hardly ever fortunate enough to choose from. Australia should be commended for the way they defended the defending champions out of the tournament, and set up a semi-final to which New Zealand fans  – and most embittered SA fans – will be looking forward to. DM

Saying “my journey is over”, long-embattled Springbok coach Peter de Villiers announced he was hanging up his whistle after the shock defeat of the highly favoured Springboks in Wellington today.