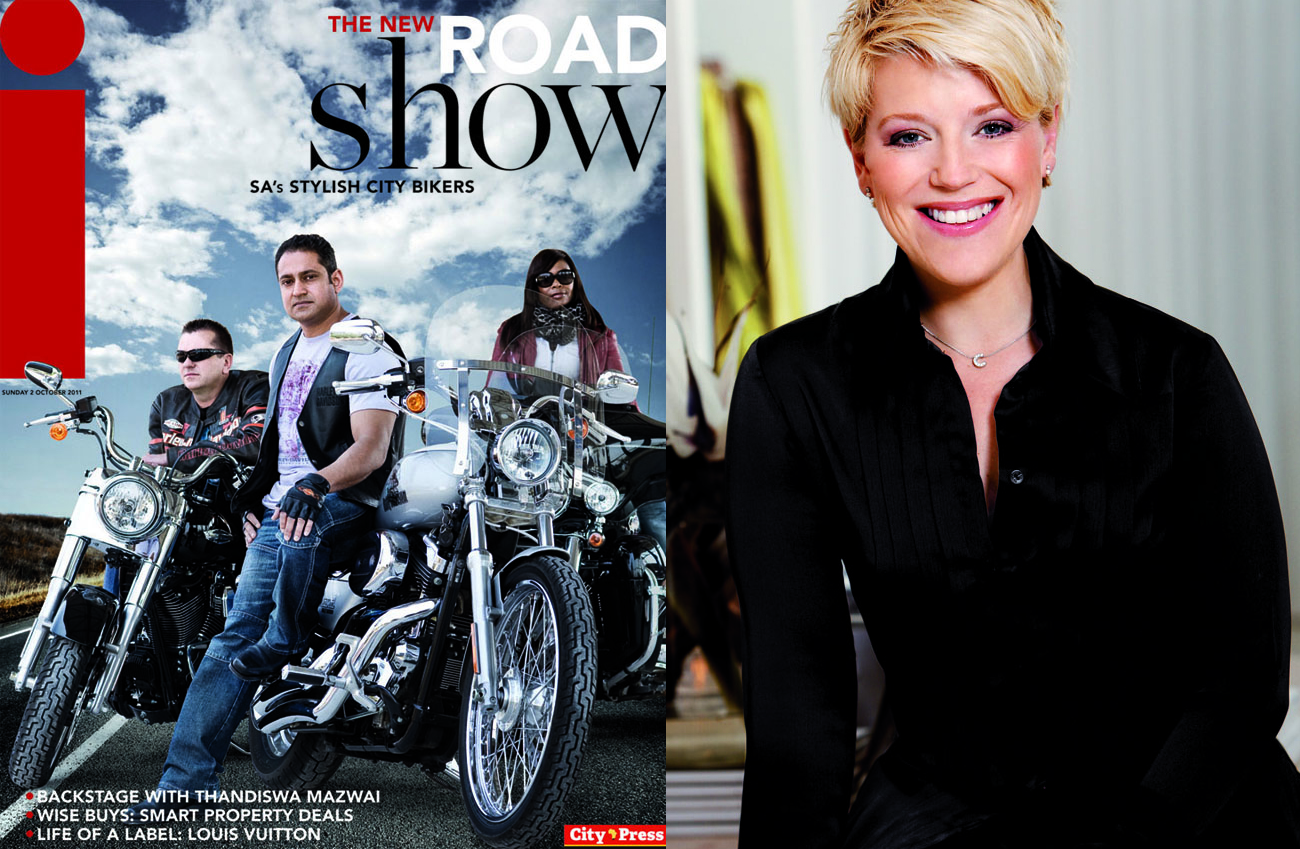 Media24 is opening their cheque book in a big way for City Press’s new magazine which premiered as a supplement to the newspaper this past Sunday. Big on luxurious eye-candy and sporting good writers, i magazine has potential, but is it distinctive enough to make readers want to hang on to it past Monday morning? By MANDY DE WAAL.

In most neighbourhoods Mondays are trash days. Those municipal garbage trucks come round and harvest the waste. For those people who can’t be bothered with recycling, this means the Sunday Times or City Press hits the bin almost immediately after the read is done.

City Press’s Ferial Haffajee hopes to change that by emulating offshore markets where newspaper magazines have added staying power to Sunday reads and made them last a lot longer than just one day.

“The motivation is that the best Sunday newspapers around the world have good quality magazines which have worked incredibly well to enhance those newspapers’ value. We’re hoping that by adding the magazine that City Press will now have a longer shelf life,” says Haffajee, who’s been at the head of Media24’s English Sunday title for just over two years now. She came in with a strong mandate to turn the paper around and grow market share.

There have been a number of changes at the paper since the former Mail & Guardian editor arrived. The first was the major design overhaul overseen by Peter Ong, a global press design guru who’s redesigned some of the world’s top papers. The next step was beefing up the investigative capacity of the paper which was done by bringing in Adriaan Basson (former Mail & Guardian investigative journalist and author of Finish & Klaar: Selebi’s fall from Interpol to the Underworld) as assistant editor.

The smartest move was one made by Media24 and feeds all newspapers in the group. That was to invest in an ace investigative unit that includes the likes of Andrew Trench, Jacques Pauw, Julian Rademeyer and Anna-Maria Lombard. What this has done is to reposition City Press as an agenda-setting title, which in the last six months has been more than true. By breaking big stories, City Press has become an often quoted news source.

But repositioning the newspaper hasn’t come without some pain. “The drop in circulation we have experienced was an anticipated drop,” says Haffajee. “We did lose a certain amount of readers, but the experience of the Mail & Guardian and other well performing weekly papers show that if you continue to break news, use quality writers, and invest in investigative journalism you can protect and grow your market share.”

Media24 has opened the cheque book wide for the newest salvo, a luxurious, big format glossy called “i” magazine which Haffajee hopes build the newspaper’s brand, introduce the title to new audiences and enhance the value offered by City Press.

The newspaper’s magazine is outsourced to New Media Publishing which is run by strong magazine veterans, and which Media24 own a 58% share in. From that perspective, the Naspers-owned company is spreading the love (and money) within the group. The magazine will have a 120,000 print run initially and will be distributed in Gauteng and KwaZulu-Natal, but Haffajee hopes to expand this footprint nationally which will see the print run rise to 250,000.

Haffajee maintains though that getting outsourcing to New Media will still be cheaper than a DIY job. “Newspaper people aren’t good at making beautiful magazines and Media24’s magazine people do it beautifully, they are the undisputed champions. It would cost us much more to buy all the expertise in from a culture and design perspective, and we’re focussing on building strong links so that it doesn’t feel like a foreign product,” she says.

The launch team that put the magazine together is headed by Clare O’ Donoghue (who was editor at Marie Claire, Style, Femina and Top Billing magazines), Tracy Hawthorne (whose written or sub-edited for just about every magazine in this country), and Biddi Rorke (who is another name familiar to locals who love magazines).

“I have always been first and foremost a journalist trained in old newspaper style of journalism,” says O’ Donoghue who is the content director for the City Press magazine. “I’ve always thought of magazines as being a bit ‘powder puff’ but have enjoyed bringing a harder edge and a gravitas to the magazine work I’ve done. I think it is crucial to get the balance of style and substance right.”

i Magazine has certainly got the style aspect of the magazine spot on. The read is large and lavish because of the size of the magazine, and the articles are crisp and tightly written. The style is strongly visual, with striking layout and excellent photography but what the magazine still needs to accomplish is the creation of a distinctive voice.

“We still need to do a lot of refining on this magazine. It is a launch edition and we have yet to put a full time editor in place. We’re hoping that this editor will bring a distinctive voice to the publication. That said, we basically had 16 days to turn around a magazine from the word ‘go’. Sixteen days is not a lot of time to turn around a magazine,” O’ Donoghue says.

“City Press believes that the Sunday market is wide open, and that there are a lot of cynical readers who have left newspapers, or people who aren’t engaging with Sundays that could be brought in. City Press told us they wanted a hybrid magazine, which is an interesting combination of a traditional magazine that would fit right in with the paper. So it is not like a pamphlet that you flick through before your coffee’s cold. We do want to introduce some good long reads into the magazine in the future.”

Writers for the debut issue include Media24’s Sam Wilson, and iMaverick’s own Sipho Hlongwane. While the magazine is aspirational, with eye-candy indulgence, it somehow lacks the distinctiveness and the gravitas that O’Donoghue says she wants it to have.

As one media pundit put it via Twitter: “Slick design, but very slim on content! Just listicles and modular copy. Not a patch on Sunday Times’ Lifestyle.”

The publication has massive potential but if it wants to avoid the Monday trash collections, it will need to expand beyond lists, eye-candy and luxuriousness as a reason for people to hang onto the magazine. In the local market where so many magazines in general, and woman’s magazines in particular, have become homogeneously droll, City Press’s big glossy would do well to be a little different instead of being more of the same. DM