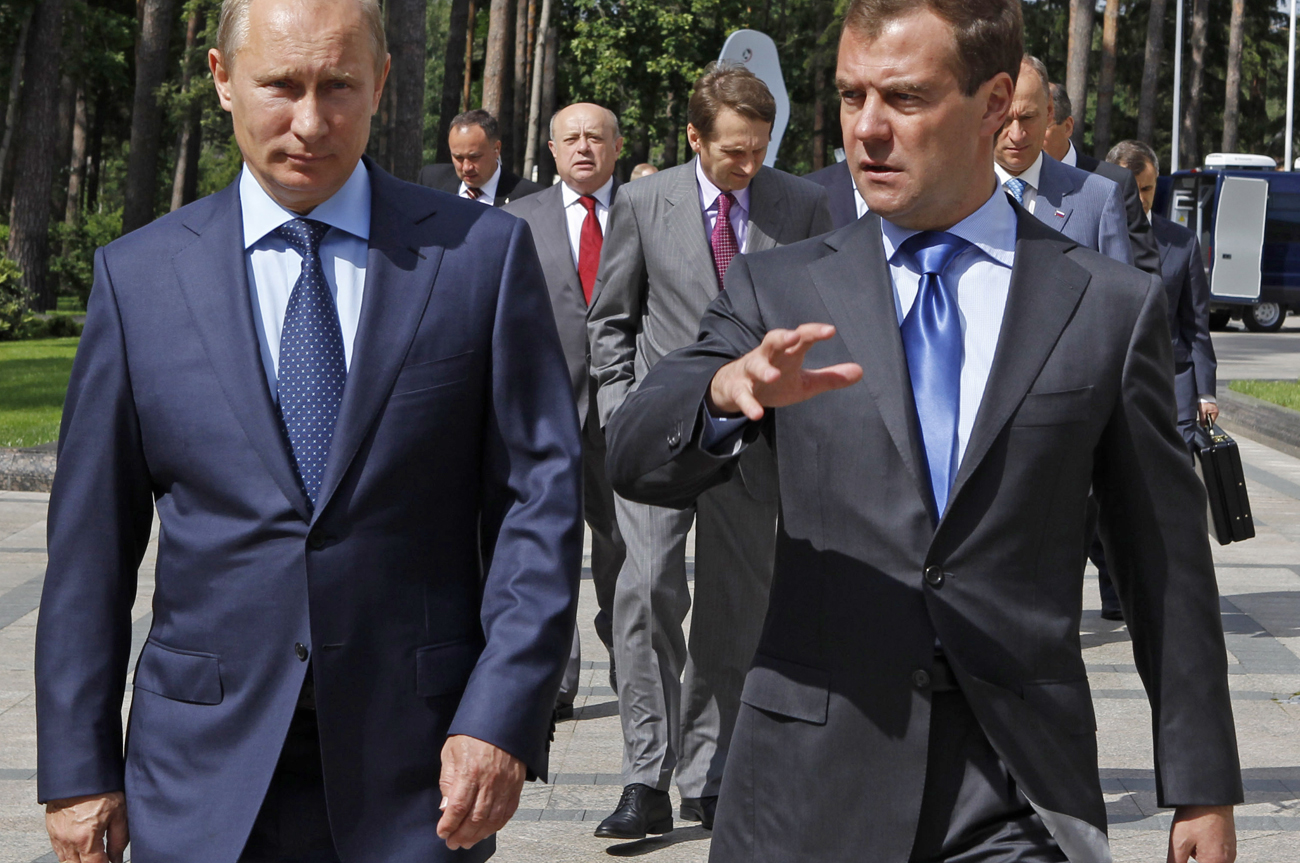 On Saturday President Dmitry Medvedev threw his influence and support behind Prime Minister Vladimir Putin for next president, virtually ensuring Putin will become Russia’s leader. What will Putin's next adventure bring to the nation that likes him so much? By J BROOKS SPECTOR.

In recent months, Putin has signalled his intention to remain a dominant political figure – making televised appearances astride a Harley-Davidson, doing a little deep-sea diving, as well as carrying out those politically potent heart-to-heart dialogues with the common man. And, of course, Russians have had lots of chances to see him shirtless or practising his martial arts moves. Over the years, Putin has carefully cultivated a macho image, using props like a fighter jet to fly into strife-torn Chechnya or showing off his black belt in judo. Especially when he is shirtless, Putin has been heard to say “I’d like the Russian public to see me as the person they’ve hired for this job.”

Putin is easily Russia’s most popular politician, and he will face mere token competition in the March 2012 election. One of Medvedev’s earliest decisions once he became president was to have the term of office lengthened to six years and, if Putin serves two terms until 2024, he will have been Russia’s leading political figure for about a quarter of a century – putting him the same league as Leonid Brezhnev (18 years) and Josef Stalin who ruled for around three decades.

Vladimir Putin has already indelibly put his stamp on contemporary Russia. Following the often desperate years of Boris Yeltsin’s time, Putin’s impact has been to generate growing prosperity, although his critics argue this growth has come at the expense of post-communist democratic freedoms.

Born in 1952, Vladimir Putin studied law and economics before joining the KGB, which then posted him to East Germany from 1985-90. Boris Yeltsin arranged for Vladimir Putin’s rise to real power by making him prime minister in 1999 and then naming him acting president in his place. In 2000, Putin was elected president, and, three years later, the general election gave Putin control over the Russian parliament as well. The following year, Putin was re-elected by a landslide. That year, 2004, was also a year of major Chechen attacks on civilian targets such as the hostage crisis at the Beslan school. In 2005, Putin’s government had Mikhail Khodorkovsky, the country’s richest man, arrested and jailed for tax evasion and then it cut gas supplies to the Ukraine in a flexing of economic muscle.

Regardless of his reputation for using or threatening the use of force, Putin has held his popularity with Russians who favourably compare his period of leadership with the chaos of the 1990s when much of the Russian state essentially seized up and the country’s security forces looked particularly inept. Then, since the hardships of the rouble devaluation in 1998, the economic recovery of the Putin years has restored a sense of stability for many.

Nevertheless, for Russia’s threatened band of liberals, Putin’s KGB past and the authoritarian associations of that background are disturbing, especially after taking into account his control through his allies of much of the media, the creeping controls over foreign-funded NGOs focusing on human-rights abuses, his imposition of military power on Chechnya and his nostalgia for the old USSR whose demise he famously called “the greatest geopolitical catastrophe” of the 20th century. In his international orientation, Putin visibly allied himself with the  “war on terror”, which gave him a good position from which to compare Chechen separatists to al Qaeda.

Medvedev’s public endorsement of Putin as his successor will get final approval in Russia’s presidential election in March 2012. And completing the circle, Medvedev would become prime minister again (as head of the United Russia party list) for the Duma in December.
The latest edition of The Economist expressed disappointment in Medvedev’s record as a reformer, arguing it is difficult to see his hand in any substantial change in the country, except, perhaps, in some efforts to open public debate and discussion.

One of Medvedev’s closest aides, Arkady Dvorkovich, vented via Twitter “there is no reason for celebration” and “now it is time to switch to the sports channel”. Other political experts questioned Putin’s assertion that this decision has long been cast in concrete. While economist Mikhail Delyagin, a former government aide, told reporters Medvedev had in fact “exhibited a degree of independence” and, if only he had been elected to a second term, he could have tried “to become a real president and not a technical one”.

By contrast, Putin is portrayed as the Russian equivalent of Africa’s “Big Man” who has worked to remould Russian politics in his image and interests. With this announcement, the future shape of Russian politics and government takes on a clearer lines. Although neither gave detailed reasons, Putin did say the deal had been brokered between them years earlier and it seems Medvedev’s presidency and how it would end looks like it was a thoroughly orchestrated political drama. As Putin told the assembled party delegates, “I want to say directly: An agreement over what to do in the future was reached between us several years ago.” And Medvedev offered, “What we are recommending to the convention is a deeply thought-out decision. Moreover, we really discussed this possible turn of events at the time when we formed our comradely union.”

Describing the average Russian’s reaction to this development, The New York Times’ Moscow correspondent reported: “As the news filtered into the street, most Russians expressed little surprise. Putin’s rise to power accompanied an oil-fuelled rise in income, and most Russians feel no nostalgia for the chaotic political pluralism of the 1990s. Opposition to Putin’s government is growing, however, in places like Moscow, whose residents get information from the Internet and are less dependent on government social payments.”

During his previous presidency, Putin relentlessly chivvied his political and economic opponents – and sometimes had them arrested and imprisoned – and then confiscated their corporate energy and media holdings. Concurrently, he constructed a political system in which the trappings of the electoral process look very similar to garden-variety democracies; but, in the Putin version, the results are never much of a surprise.

However, the crucial challenges for Putin’s Russia now are its stagnant economy, endemic corruption, growing frustration on the part of a new middle-class eager for social, economic and political evolution and reforms – and what seems like a nasty, never-ending war in the north Caucasus region.

Some observers say Putin has been signalling he may recreate himself as an economic reformer, rather than a power consolidator, effectively drawing on the image of early 20th century tsarist reformer, Pyotr Stolypin. They point to the fact Putin told his party assembly, “We must speak openly about the dependence of our economy on raw materials, about the dangerous levels of social inequality, violence, corruption, about the feelings of injustice and vulnerability that people feel when they are dealing with government bodies, courts, and law enforcement…. We can and must overcome these problems.”

Putin’s return to leadership may cast something of a shadow on US – Russian relations. Medvedev and Barack Obama had established a comfortable rapport, while Putin and American presidents have generally had testier relationships. Putting their best face on, a senior Obama administration figure told journalists US officials had deliberately sought to avoid playing favourites: “Everyone knows that Putin runs Russia. Remembering this obvious fact means that Putin has supported the reset with the U.S.” “Reset” (accompanied by that large, red reset button) was secretary of state Hillary Clinton’s call during her visit to Moscow, early in the Obama administration.

Looking forward to his return engagement as president, Putin may decide the best way to maintain – and expand – his power is to push the country away from its extreme dependence on resource extraction and primary exports, come down hard on the country’s culture of graft and corruption and find a new way to deal with Russia’s perpetually unhappy ethnic minority regions.

Moving Medvedev to the premiership could put him in the position of having to take the heat for austerity measures Putin has warned will be necessary for Russia amid global economic turmoil. Putin also proposed that Russia’s richest would need to pay higher taxes. While the flat income tax passed during Putin’s first presidency has been praised as improving tax collection, he has now called for increases in consumption and real estate taxes. If these happen, it would be really important news and could signal real economic policy changes. Of course, on the other hand, Putin may decide that the direction of more-of-the-same stability is the best way forward for him and his system of maintaining power in Russia.

Putin will soon have to face some increasingly painful, unpopular decisions in the future as Russia’s oil production levels off and a rise in the Russian standard of living slows. Moreover, by 2014, as the importation of consumer goods is expected to exceed the value of oil production, Russia will find itself increasingly dependent on foreign investment.

Two starkly different options are possible. Option A opens the door to the uncertainties – and possibilities – of a more open political system. Option B could lead to a more difficult, more fraught future for Russia. Now we will get to find out what he wants to achieve. Does he want to be remembered as a 21st century version of a stability-minded, inward-looking Alexander III who hoped to keep the forces of change at bay via authoritarian politics and an appeal to Russia’s past, or does he want to be seen as a kind of post-communist version of Peter the Great, propelling his country into a more modern version of itself? DM