Blood on the employment dance floor, and no one to clean it up 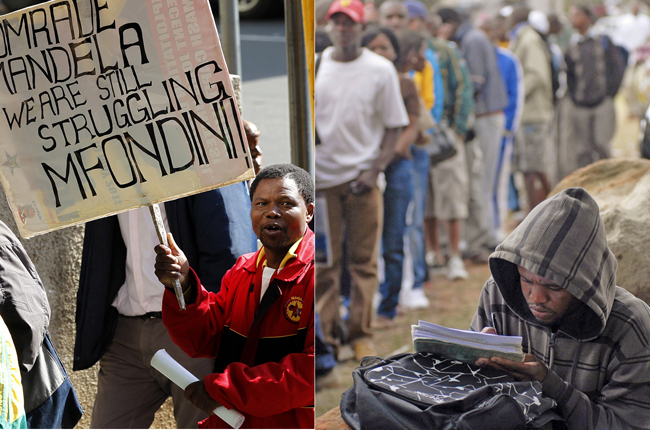 The quarterly employment statistics released by Statistics South Africa suggest we’re in some serious trouble. Before blame gets heaped onto the government (although the five million jobs thing was a reach) it is worth considering that hardly any country in the world is hiring new people in huge numbers these days. By SIPHO HLONGWANE and PAUL BERKOWITZ.

According to the quarterly employment statistics document released by Statistics South Africa, for the period between April and June 2011, the increase in the number of jobs was a whopping 0,1%.

“The June 2011 Quarterly Employment Statistics (QES) survey shows that the number of people employed in the formal non-agricultural sector of the South African economy increased by about 7,000 persons (+0,1%) from March 2011 (an estimated 8,289,000 employees) to June 2011 (an estimated 8,296,000 employees),” Stats SA said in its Key Findings Report.

The year-on-year increase in employment in the non-agricultural sector was 2% between June 2010 and June 2011. In real terms, the number of people employed in this sector went up from 8,132,000 last year to 8,296,000 this year. However, this increase merely measures the partial jobs recovery that’s been underway since early 2010. We’re still some way from the peak job figures measured by the QES (8,512,000 jobs, as recorded in late-2008, just before the global recession started to bite).

The biggest contributors were the mining and the quarrying industry, which took on 18,000 more people in the 12-month period.

Stats SA’s survey consisted of “approximately 20,208 private and public enterprises in the formal non-agricultural sector of the SA economy”.

The Quarterly Employments Statistics Survey is the smaller of the two employment studies published by Stats SA. The heftier Labour Force Survey is the one that is followed more closely, as it includes the agricultural sector, informal employment and the self-employed.

This follows on the reveal by the Adcorp Employment Index in August that there had been an annual job loss rate of 49,306 workers. “The public sector now accounts for all the job creation in the economy for 2011 as a whole,” said Loane Sharp, an Adcorp labour market analyst. In the month of August, while overall employment declined, the government expanded its workforce by 6.2%.

All these statistics continue to make a mockery of the New Growth Path and its ambitious plan to generate five million jobs by 2020.

The “five million jobs by 2020” sound bite was silly. It was based on a best-case scenario where not only all stakeholders in South Africa pulled together, but the world economy started taking on a much better shape. We appear to be much closer to a worst-case scenario, with the US and European economies barely treading water. US President Barack Obama’s biggest headache at the moment is the rising unemployment and lack of jobs. The quantitative easing measures taken by the US Federal Reserve helped keep the economy afloat, but didn’t lead to more jobs.

The PIIGS countries in Europe are laying people off faster than you can say “necesito un trabajo”.

It’s worrying that the workforce in the public sector is expanding while the private is shrinking. Don’t forget that the former is subsidised by the latter.

It also doesn’t help that there seems to be poor inter-ministerial cooperation on the economic front. Patel is pulling in one direction, his partners in trade and industry, transport and labour don’t seem to be keen to jump onto that particular train. And somewhere in this mess, national planning minister Trevor Manuel is sitting quietly.

That doesn’t mean that we’re headed to hell by way of Greece, though. South Africa did things right macro-economically under Manuel’s tenure as finance minister. After the explosion of the public debt in the 90s, Manuel managed to bring it down to manageable levels by the time he vacated the finance seat. The deficit as a percentage of GDP went down from 5.1% of GDP in 1993/94 to 0.5% in 2005/06. In that period, we also managed to service a lot of our foreign debt. This freed up a lot of money for other things for the country.

We’re back to running budget deficits, but a growing public sector is still largely sustainable over the medium term. It’s hardly a desirable path to go down; further growth in public sector employment will mean less money to be spent on new schools and hospitals. And if the hoped-for recovery in the private sector doesn’t take place, we could be hurtling towards the toxic economies of the PIIGS a lot faster than we think. DM