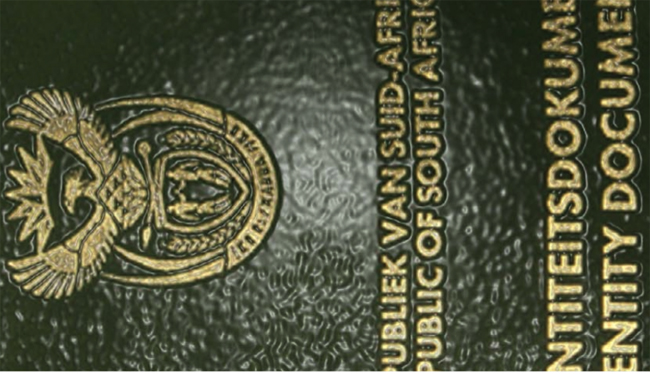 A Port Elizabeth seamstress living in a poverty stricken squatter camp in KwaNoxolo in the Eastern Cape city speaks out about the years of suffering she’s had to endure after trading sexual favours to a Home Affairs official in order to get an ID document she hoped would enable a better life. By MANDY DE WAAL.

Ntomboxolo Nyendwana has always dreamed of being a teacher, studying at college, and getting a paying job so she could create a better life for herself and her children. The 41-year-old seamstress currently exists on social grants and what she makes from sewing and selling pillows. She also does needle work and clothing repairs for cash.

“In 1991, I was studying Matric and went to Home Affairs to make my first application. After that I got a letter to say I didn’t write my postal address (on the forms). I went back. They said I must apply again. They told me I must pay again. But when I went back they had scratched my ID number out and told me that my number was wrong,” says Nyendwana.

The seamstress was contacted by Home Affairs once more, and they told her that her fingerprints on the documentation had changed. By this time Nyendwana had gone back and forth to Home Affairs many times, but it was only in 1993 when she was at the government offices that she was advised that she was one of two people with the same ID number.

“Home Affairs called me and said that there is a person posing as myself. Or I am posing as her. They said I must bring my birth certificate. By that time I was studying for a BA in Education and the university told me if I didn’t get my ID sorted out I will be expelled. I wouldn’t get my degree.”

When Nyendwana went back to Home Affairs she was standing in a queue when a government official said he could help her. She says she knew this man as a child, and that he knew her family. The official told Nyendwana he had powerful connections in Pretoria that would quickly help resolve the mess. “I spoke to this man. He said he knew people where the IDs were made and that he would sort everything out if I slept with him. I was afraid and I was desperate. I didn’t want to sleep with him, but I didn’t want to be expelled.”

“He said to me I must come with him. I followed him and he took me to the toilet and there he slept with me. He just gave me a toilet paper to wipe myself. After that we moved back to the queue. Instead of calling my name to help me he called someone else. I was so angry and frustrated with myself. I stood up, walked out and went home.”

Feeling ashamed, Nyendwana never went back to Home Affairs for a while, even though 1994 brought democracy to South Africa and enabled her to vote for the first time. “I had to vote with a temporary ID because I had no ID book.”

A year later in 1995, Nyendwana still had no ID book. She returned to Home Affairs where another official told her to go to her elders and slaughter a goat. “This person said there was so much darkness on me. I took it as an insult. Another lady working at Home Affairs asked me to bring her Coke. She said I was such a regular I was supposed to bring something for her.” Each time Nyendwana returned to Home Affairs, the same official that she alleges was trading sex for favours, pestered her for sex.

In January 1997 she received her ID book in the post, but with the wrong ID number. “My other name is Patience. But in my book they wrote ‘Patient’ instead of Patience. I didn’t want to go to Home Affairs again because I had suffered so much. I would keep this ID safe with me.”

Nyendwana resumed her studies but in 2005 when she went to draw funds from her bank account which her social grant was paid into, she discovered her bank card was blocked. “The bank told me there was another person in Grahamstown who had my name, surname and a temporary ID with my number. They said she got my money. The bank said I had to go to Home Affairs to get them to do an investigation.”

And so Nyendwana was forced to return to Home Affairs again, a place she says has brought her enormous hurt, shame, anger and frustration. “They gave me a letter for the bank. I asked them to look what is happening and on the computer they showed me this other person in Grahamstown with my name and ID. They said her children were eight, my children are four. I went to the SASSA offices and this person had made a grant for her eight children. They had changed the address for my social grant to Grahamstown.”

“I was sick with worry. At Home Affairs, the women said they will get me a new number. But I was worried that if I get another number I would still suffer.” And so Nyendwana had to apply for an ID document yet again. She was forced to do so after her bank account was frozen. Nyendwana says each and every time she has had to go back to the Home Affairs offices it has been a shameful, tormenting experience for her.

After applying for her ID document again earlier this year she wrote a six-page letter to Home Affairs in Pretoria to tell them what had happened and to describe her suffering. “I got a response from an assistant manager who said he was shocked and told me to write a statement. I got a phone call from a Mrs Naidoo to say she had spoken with this official.”

Nyendwana says she didn’t know what further to expect from Home Affairs. “I was thinking they would call me again but they didn’t phone.” A couple of months later Nyendwana got notification that her ID book was ready. “The first person I met when I went to Home Affairs was the same officer. I was shocked. I got my new ID but I was so angry. I went to this man and I said: “Do you know what you have done with me?” He said he was going to beat me. I said he could beat me because he had hurt me and the beating would not pain me more.”

Nyendwana says she has made a case against the police and is waiting for a case number. “Now that I have spoken out I feel better, but I am not better. To be honest I am suffering. If I had my ID, I would be somewhere. I would be living in a decent place compared to where I am living. This official was there to serve us. He took me and made my life miserable. I am hurt. Very hurt. I wish men didn’t take women for granted. I feel I was taken for granted. How many people are in my situation like this? I am not the first person. I am not the last person.”

Daily Maverick was first alerted to this story by the Daily Sun. Journalist Mkhuseli Sizani who wrote the story says he often gets calls from foreigners who complain about corruption and Home Affairs officials who demand bribes in order to secure documents. In August Daily Maverick ran a story about Zimbabweans who say they had to pay officials at the Marabastad Refugee Centre in Pretoria bribes to secure papers.

“I spoke to Sonto Lusu, the Home Affairs regional manager for Port Elizabeth and Ronnie Mamoepa the national spokesperson who said they will follow this up. I am also going to continue writing on this matter, but I am just waiting for the arrest to happen and for the case number,” says Sizani. Mamoepa says he views the allegations in a serious light and that Home Affairs will investigate and “deal harshly” with the official if the complaint is proven true.

“This woman’s life has been shattered. Because of this ID problem she hasn’t been able to become a teacher and the officials abused their power which is a bad habit for our country.” Sizani says if the matter is proved to be true, the real question will be how many other people were victimised by the man. “It is terrible. What I want to know is was the delay in her ID intentional so as to make her vulnerable?”

The alleged sex offender’s name has been given to Daily Maverick but is being withheld until a thorough investigation into Nyendwana’s complaint has been conducted. DM