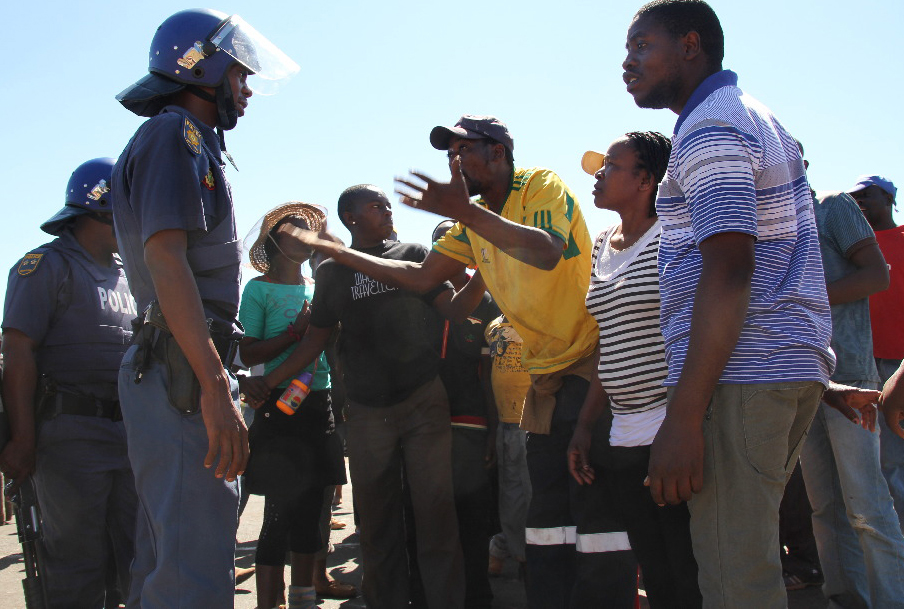 As rocks and rubber bullets and more deadly ammunition continued to be exchanged in a township just outside Lenasia, PHILLIP DE WET looks at what we've already learnt from the latest service-delivery protest – and what it implies for South Africa's future.

We’ve seen it before: a belief that some sinister organising entity is behind the spread of service-delivery protests. Gauteng housing MEC Humphrey Mmemezi gave a hint of the same kind of thinking on Tuesday, implying that sore losers in the recent local government elections had been misleading the people of Themb’elihle, confusing and inciting them. That may well be true, but it is far from the whole story. A whole range of factors gave rise to these demonstrations, and even made the associated violence seem, in hindsight at least, inevitable: a long history of broken promises, a paternalistic attitude towards residents from provincial officials, the trumpeting of development stories that always seem to come from elsewhere, the better lives lived by richer communities in close proximity, the seeming ineffectiveness of democratic channels, inappropriate spending priorities, poor communication – the list goes on. With only minor variations, those same conditions exist in many places in South Africa. By Tuesday various political groups and individuals without a current platform were sniffing around Themb’elihle, sensing a golden opportunity in the upheaval. By the end of the week, we’d wager, many more of those from places far and wide will be trying to replicate what has happened. Meanwhile, more and more communities will see a reflection of their own frustrations. Neither requires a political conspiracy, but both promise trouble elsewhere, whatever the outcome in Themb’elihle.

When you’re angry at the government, your neighbours are in the line of fire

The black residents of Themb’elihle aren’t angry at their mostly Indian neighbours in Lenasia They are very clear on who is to blame for their living conditions: the provincial and national government, their representatives at those levels, and the ANC that ultimately runs both. While many point out the vast disparity between their shacks and the sometimes quite large houses across the road from them, none that we spoke to believed this to be a zero-sum game in which Lenasia residents had to be deprived of services so that Themb’elihle could benefit. Yet they waged war on Lenasia and passing motorists, trying to plunge the former into darkness by burning down electrical substations and distribution boxes and terrorising the latter with stones and make-shift barricades. Why? Because they can. They want to spread the pain and gain attention, and their reach simply doesn’t extend beyond their immediate surroundings.

They were also quite ready to turn on their own. We saw several incidents of intimidation, with children being prevented from leaving for school and those suspected of having left the township to go to work threatened with violence on their return. Those involved don’t blame their neighbours for their lack of electricity, but they do demand solidarity, and are willing to use sticks and stones to get it. A spread of politicians and would-be local leaders have urged the people of Themb’elihle to calm down this week. Their arguments include the geological (dolomite formations in the area, which make development inadvisable), simple logic (such unrest affects the community worst, starting with lost wages and infrastructure destroyed), political logic (showing allegiance to the ANC is better than getting up its nose), logistical (providing temporary electricity infrastructure is silly when you’re busy building houses elsewhere) and the historic (the legacy of apartheid, though being eradicated, remains). By the time these arguments were used, though, people had already taken to the streets and to say they were unreceptive would be an understatement. The counters were sometimes wildly improbable conspiracy theories and sometimes selective deafness. There simply is no selling logic to people once they are well and truly riled up.

Don’t mistake a hand up for a handout

It is easy to assume that the residents of Themb’elihle have a sense of entitlement, and want the government to give them an easy life by providing houses, jobs and even cash. The reality is quite different. Many in Themb’elihle are proud of what they consider their relative affluence, showing off jewellery and computers and, in one case, a salary slip. “We can build our own houses,” is a common refrain. Some who would be entitled to social grants say they refuse to take them, because making their own way in the world is preferable. Asked if they would be willing to pay for electricity if they were connected to the grid, the answer is an emphatic yes, backed up by calculations on how much they spend on paraffin or petrol for generators every month, and what economic advancement could come with electricity. They demand opportunity, and expect that for free, but don’t lack for pride or independence. Listening is never a bad idea

The unifying factor in Themb’elihle is frustration, and the root cause of that frustration is the sense that nobody is listening; memorandums of grievances go unanswered, politicians only arrive once the tyres are burning. The number one criticism of MEC Mmemezi’s failed attempt to calm the situation down on Tuesday was not his failure to comply with any demands, but the fact that he came and went without taking questions. “What kind of democracy is this?” one resident seethed. “These people, they don’t come to talk to us, they come to talk at us.” Groups of residents would often mob any journalist asking questions, and react angrily to anyone who threatened to interrupt a conversation. While much time was spent hurling rocks and burning tyres, far more was spent in talking among themselves, endlessly recycling arguments and grievances. They crave an audience beyond those in their community, though, and have come to believe – not without reason – that violence is the only way to get it. DM