Malema and the Disciplinary Committee: A Rough Guide 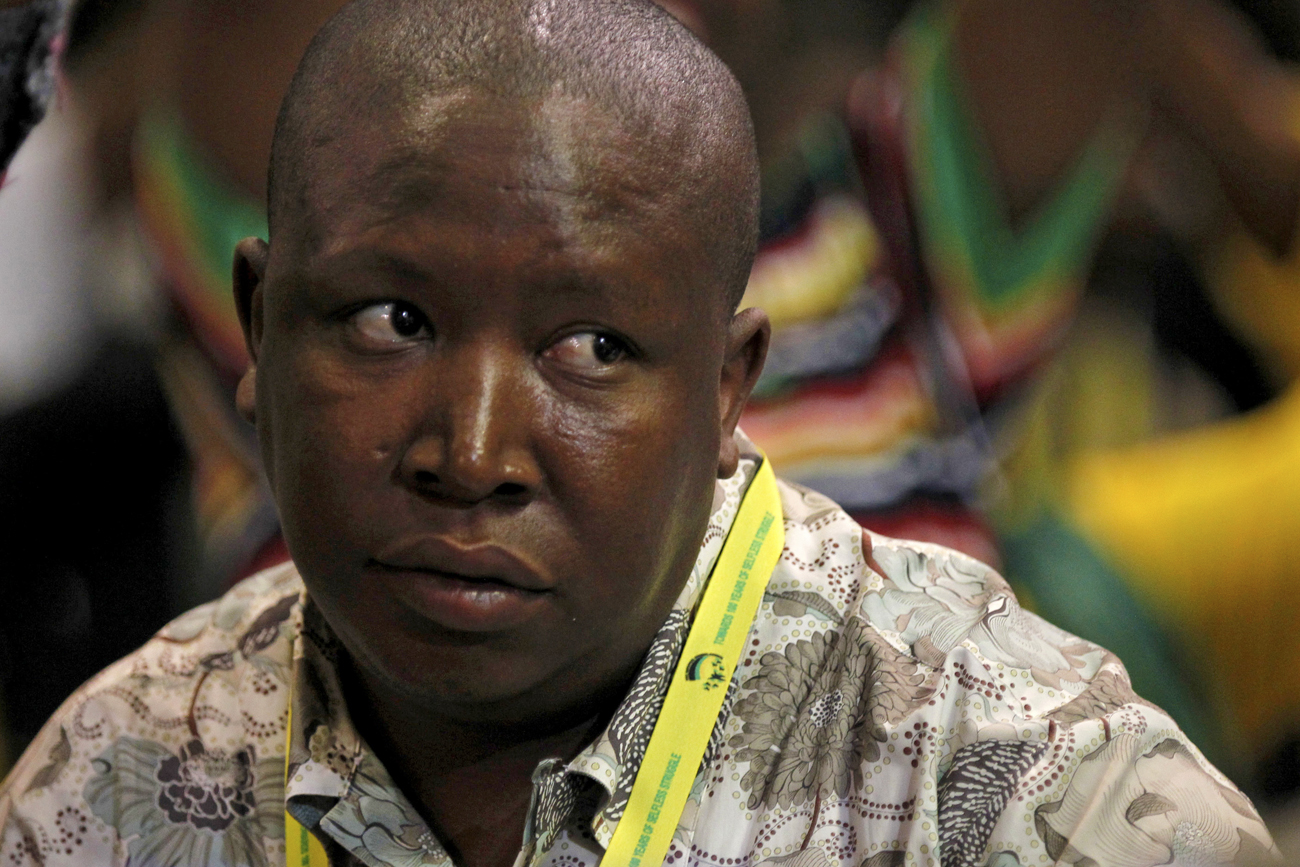 For all you wondering what will really happen and what are the chances, CARIEN DU PLESSIS has compiled a handy rough guide for the incoming Julius and Floyd's excellent disciplinary adventure. Sit back and relax while she explains everything.

So what are the Young Lions up to? They aren’t weeping; they are roaring

The ANC and its youth wing gathered in separate meetings over the weekend to regroup after the D-word surfaced last week. The Youth League has indicated that it thinks the ANC should have spared the rod and reasoned with the child before delivering charges on its leader Julius Malema and his foul-mouthed flunky Floyd Shivambu on Friday.

The meeting is urgent because the D-dates for the two are August 30 (Malema) and August 31 (Shivambu).

Malema has rallied his troops behind him as his 34-member national executive committee “re-affirmed its total support of the leadership of the ANC Youth League” and repeated its chorus that the “charges are political issues” (they could be right – see below) which “require discussion in the structures of the ANC”.

The ANC seems to think the time for talking is over but its spokesmen could not be reached to talk about this.

Like a scolded child the league apparently wants to – belatedly – take the moral high ground, because it said it “will subject itself to the discipline and policies of the ANC” and it’s always ready “to engage with the leadership on all critical issues that leads towards total realisation of Freedom Charter objectives”.

Their meeting came amidst a four-day special national executive committee meeting convened by the ANC to discuss “serious matters related to organisation building and renewal”, which means some, like Malema and North West ANC secretary Kabelo Mataboge, both ex-officio ANC NEC members, had to leave the ANC’s meeting to attend the league’s.

Notably, the league’s statement on Sunday was issued not by Shivambu as usual (when he faced a Young Communist League disciplinary last year, he used very strong words to convey his unwillingness to talk about it), but by league spokeswoman Magdalene Moonsamy and secretary-general Sindiso Magaqa.

Magaqa, deputy president Ronald Lamola and treasurer Pule Mabe are reportedly next in line to receive charge sheets, possibly as soon as Monday.

No, but what will they really make of the charges?

The League last week announced that they were planning marches on “key economic sectors” like the Johannesburg Stock Exchange, the Chamber of Mines, and the Union Buildings. These marches could now conveniently also pressure the ANC, and could even be directed on the Luthuli House “court room” where the hearings are set to take place.

It has also been reported that the League wants to “flood” the hearings and bring its whole national executive committee, seeing that Malema and Shivambu spoke on their behalf. That would make it difficult, if not impossible, for the ANC to discipline them. This happened, for instance, when Malema had to attend anger management classes after last year’s disciplinary hearing. The kindergarten strung along but the kids were chased out of the classroom after they sat there and laughed all the time.

The leaders could even boycott the hearings completely if the ANC doesn’t heed their demand to discipline the whole leadership.

What are the charges?

ANC national disciplinary committee chairman Derek Hanekom said in a statement on Friday that Malema and Shivambu were charged with “various violations”, such as bringing the ANC into disrepute through their utterances and statements on Botswana (planning to work with the opposition to effect regime change in our neighbour) and sowing divisions in the ANC’s ranks (Malema’s been going around comparing President Jacob Zuma’s leadership unfavourably with his predecessor, Thabo Mbeki).

It’s further reported that they could be charged for imperilling race relations (Malema went around before and after the elections saying the whites have stolen land and “we” must take it back), bringing the ANC into disrepute and, in Shivambu’s case, swearing at journalists.

But are the charges really political?

To an extent, yes, when taking into account that the ANC has to date not heeded Zuma’s own ideal of applying discipline “without fear or favour”. Convicted fraudster Tony Yengeni has, for instance, never been disciplined and in fact remains on the party’s national executive committee despite having been convicted of a crime without the option of a fine – defined in the ANC constitution as “misconduct” against which disciplinary charges “may” be invoked.

It is not clear what all the charges against Malema are, but if his disciplinary is about teaching him moral values, he should also be charged for “sowing sexism” as he was found guilty of harassment by the equality court after implying that Zuma’s rape accused had a “good time”. He recently paid the R50,000 fine for this.

Who will represent them and who will hear the case?

Last year, Malema was represented by ANC treasurer-general Mathews Phosa, but seeing that Phosa is part of the party’s top six leadership who pressed the charges against Malema, he’s unlikely to repeat the favour.

Phosa might also have realised the gravity of the corruption allegations against Malema, and as ANC treasurer, he would want to, or have to, keep his distance.

It’s not clear whether Malema has decided on a representative yet.

What’s the worst that can happen?

Malema was convicted in April last year of sowing divisions within the party, and his ANC membership can be summarily suspended if he’s found guilty of this again. He would in this way be automatically suspended as ANC Youth League leader because this position depends on his ANC membership.

If he’s suspended for two years, it would be very difficult for him to find a platform to influence the ANC’s elective conference next year. If he works outside the party, and even if he rallies majority support there, he could be charged with “counter-revolutionary” behaviour.
Some within the party are reportedly calling for a five-year suspension, which would see Malema return to the ANC after the age of 35, and therefore no longer as a young lion.

Some are even calling for expulsion – UDM leader Bantu Holomisa was expelled from the party in 1996 (Zuma was then ANC chairman) for bringing the ANC into disrepute for remarks to the Truth and Reconciliation Commission.

One of the options last year was to send Malema to political school (or “exile”, as he called it) to China for a few years, or to send him to Parliament where he would be subject to strict party discipline and scrutiny (he declined a deployment there in 2009).

What are Malema’s chances?

One of his friends remarked that “this is all politics” and that things could change easily and quickly. Senior leaders in the ANC are said to be fed-up and ready to take forward the charges.

On the other hand, Malema has the support of almost all the ANC’s provincial secretaries and they might have the power to rally some support for him in provinces.

In the North West, however, ANC members failed to turn up at a seminar on nationalisation which was to be addressed by Malema and which was organised by provincial secretary Kabelo Mataboge. This could signal that Malema’s support isn’t watertight in all the provinces, even those that are supposed to be his biggest allies. If the League organises marches, this could be a good gauge of his support.

Unlike last year, the ANC’s top six leadership seemed to be united behind Zuma, which weakens Malema’s case slightly. Although the ANC’s national executive committee meeting, which ends on Monday, said it would not discuss the ANC Youth League matter, the outcome of this meeting and the amount of sympathy Malema received there, could also influence the strength of the ANC’s case against Malema.

Could Malema have any tricks up his sleeve?

There is a strong chance that the league might have some dirt on Zuma, who has a rather publicly known complex personal life and who has been criticised for it by the league. Questions also still remain around the way in which Zuma obtained tapes of phone recordings of conversations between Mbeki and Zuma’s prosecutors in his corruption case, eventually used as evidence to persuade the National Prosecuting Authority to drop charges against him in 2009.

The league’s recent noises praising Mbeki could be a signal to Zuma that his secrets are no longer safe with them.

Zuma is therefore in a catch-22: he could be damned he goes through with the charges against the league, and a lame duck if he doesn’t. The upside for Malema is that he will be stronger than ever if he can emerge from this episode uncensored.

What about Malema’s business dealings and the criminal charges?

The Hawks, over the weekend, confirmed that they are investigating corruption charges against Malema after a complaint by lobby group AfriForum just over a week ago.

More details of his business dealings as shareholder through his Ratanang Trust in On-Point Engineering have emerged in the weekend papers, and there now is evidence that his trust had been funding league meetings.

Public Protector Thuli Madonsela last week confirmed that she reopened her investigation into the Limpopo government’s business dealings with Malema.

But it often takes ages for these cases to get before the courts, if ever, corruption cases are difficult to prove, and jails can be pretty porous if you’re politically famous.

Whatever happens, Malema is sure to take a leaf or two out of Zuma’s book on teflon tricks in politics. It remains to be seen how successful he will be in following in the president’s footsteps. DM