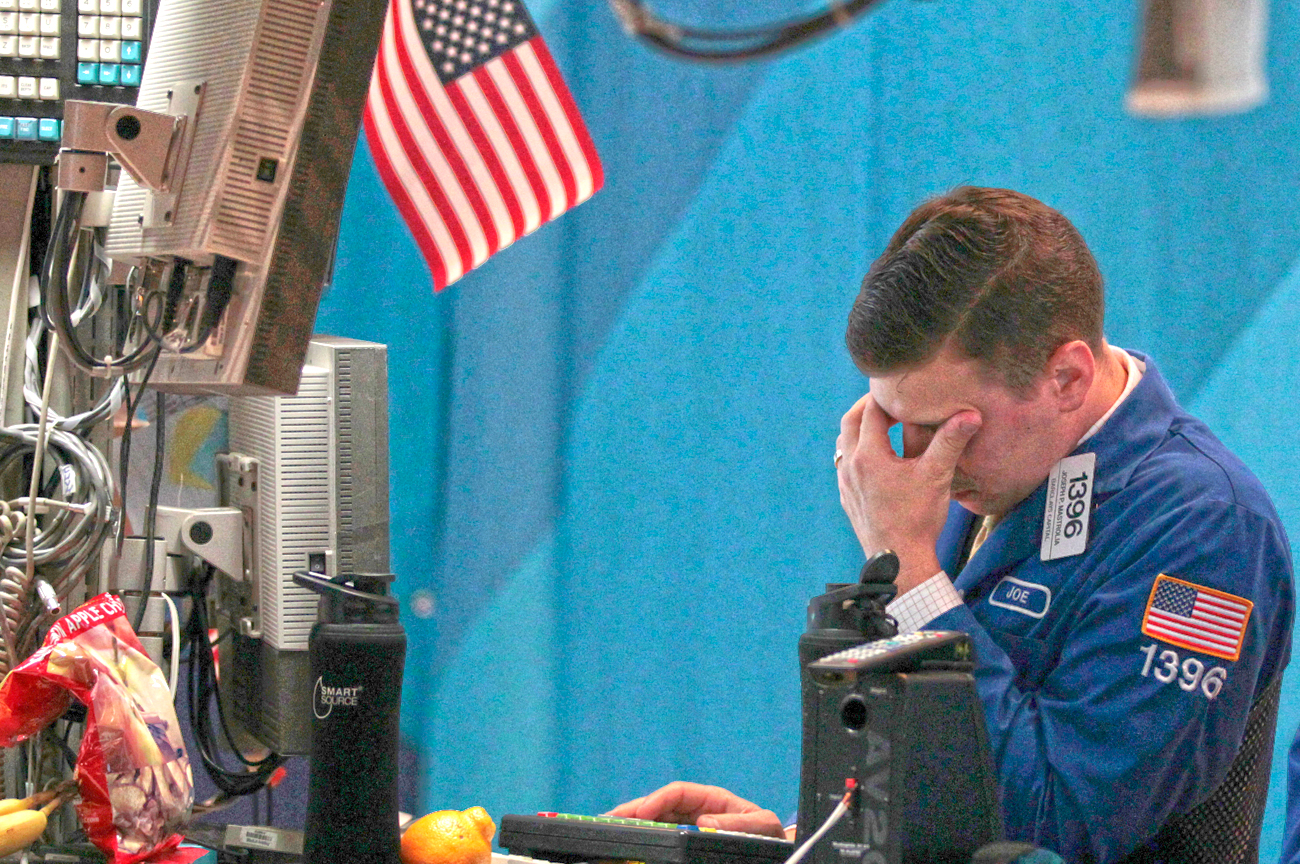 For South African amateurs invested in funds that are weighted heavily in US equities, August has been a frightening month. Do you cut your losses and convert to cash, or do you wait for a rebound? Do you make a call that the system is on the verge of collapse, or do you place faith in a solution? If other people’s misery is how you get your kicks, here’s a first-person view of the panic from an ignoramus investor. By KEVIN BLOOM.

A confession: four-and-a-half years ago, when US markets were giddy with optimism, the Dow Jones Industrial Average was eight months off its all-time high, and Wall Street investment bankers were playing elaborate games with sub-prime mortgage instruments, I invested most of my money in a high-risk dollar-based fund. I was persuaded to do so at a lengthy meeting with the chief executive of a boutique financial services company in Sandton, during which I was talked through a very impressive performance graph – since the fund’s founding in June 2002, the CEO explained, thanks to a clever asset allocation across cash (5%), global inflation (11%), global flexible income (15%), global property (16%) and global equities (53%), it had risen more than 50% in value. All indications, he added with a winning smile, were that it would continue to climb. The date of this regrettable meeting, again, was February 2007. How was I to know?

The next meeting occurred in late 2010, mostly because, before then, I couldn’t bring myself to face the obviously precipitous drop in my “net worth” (a phrase that even in the best of times never contributed much to the self-esteem of writers). Surprisingly, it wasn’t as bad as I thought – the markets had rebounded strongly off their March 2009 lows, the graph I’d been shown in 2007 was back on its impressive up-curve, and my losses were steadily being clawed back. “It would be a pity to move to the cautious fund now,” the CEO advised me, suggesting that fundamentals were good and that we were unlikely to see a repeat of 2008. Once more, how was I to know?

How is anyone to know? You can look to the experts, you can watch the signs, you can read the daily reports. Take for instance the reports on Friday 18 August, which noted that markets on both sides of the Atlantic were rocked by fresh waves of selling amid fears that the world economy was sliding back into recession. Such news does strange things to people who are essentially ignorant of economics and finance: like millions of others whose career focus has been elsewhere, I’ve tended to place my faith in the hands of knowledgeable financial advisors, and when they turn out to be as wrong about the markets as I am, it’s kind of a scary place. So now would be a good time to close out exposure to equities and convert everything to cash, right? Right, because if I can’t handle short-term volatility and take the long-term view, I shouldn’t be invested in stocks. But also wrong, because even ignoramuses like me know that you should never get out at the bottom. Is this then the bottom? And what about the fact that the major listed companies in the US are all doing great right now, with piles of cash on hand? Surely this will be reflected in the Dow Jones at some point in the not-too-distant future?

I could go on – I could argue that almost five years down the line, I’ve already taken the long-term view – but I won’t. I don’t want to whine. I accept that if we do hit another global recession, billions of people will be far worse off than me. There will be famines in Africa, panic in America, riots in London. There will be the spectre of another credit crunch. There will be urgent meetings of European leaders and central bank governors. There will be mayhem.

Okay, so maybe we already are in another global recession. Then again, maybe not. After all, everyone who seems to know anything seems to be saying that we’re nowhere near 2008 levels of volatility and chaos. Where to turn? How about the real 2008, and the mistakes of people who actually saw it coming, as portrayed by Nick Paumgarten in a piece for the New Yorker in 2009.

“I met a Wall Street cynic who had grumbled for years about the overextended consumer, the negative savings rate, and a profligate government that some day would be unable to make good on its promises. He foresaw a grisly end to the credit boom, if not a collapse in the markets for stocks, real estate, art, mediocrity, and foolishness, and yet, like most people, he lacked the conviction and, perhaps, the macroeconomic purview to translate his misgivings into financial gain. He got short too soon and lost heart. Meanwhile, life and the general mood conspired to compound his long position. He bought a house and went to work for a hedge fund – the latecomer playing catch-up, eager for a piece. The markets turned, and the hedge fund went under. One day in March, as the Dow fell to its lowest level in a dozen years, he e-mailed me an investment letter, in which a hedge-fund manager surveyed the world’s insolvent banks and unstable sovereigns and anticipated a possible collapse of the global financial and monetary systems – the end of fiat currencies and the beginning of Lord knows what. It concluded that the world needed a ‘do-over.’ ‘Can I have a do-over, please?’ the cynic wrote. As a broker said to me, ‘If it’s the end of the world, you only get to bet on it once.’”

Point being, for financial ignoramuses like me – and many others who aren’t, on the surface, financial ignoramuses – only the end of the world is the end of the world. I’ve just had my girlfriend, who’s a highly-qualified economist, look into the breakdown of the assets in my fund. It’s much better than I had let on, she said, there are some solid stop-gaps. I should stick with it, apparently. Watch it closely, but not turn to cash just yet. An hour into trading on Friday, the Nasdaq and the S&P 500 are actually up. I’m feeling a lot better. Maybe I could become a professional. Maybe I could even stop watching the ticker and do some real work. DM

Photo: A trader works on the floor of the New York Stock Exchange, August 17, 2011. REUTERS/Brendan McDermid.